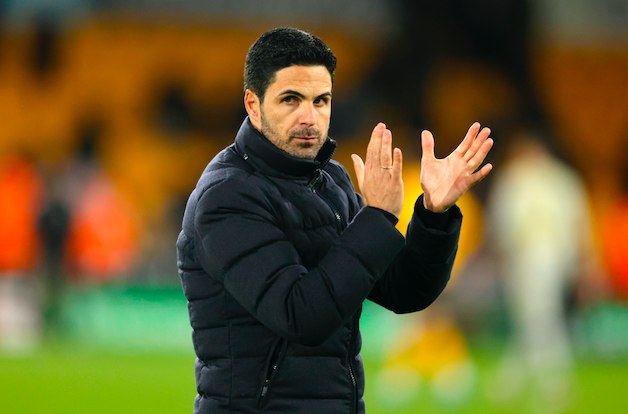 Newcastle vs. Arsenal: Mikel Arteta's team simply have to win to maintain their top 4 ambitions
By Adam Roberts
13:57 Monday 16th May 2022 - 4 minute read

There is a massive game taking place in the Premier League on Monday night. Newcastle take on Arsenal in a match that could have huge implications in the race for the final Champions League spot. The Gunners need to win here to regain fourth place and hop above bitter rivals Spurs. We've asked our statman @OddsT3rrier to take a dive into the recent history between the two sides, and look into this season's stats to see if there are any angles which you can use to your betting advantage. He's also selected three picks and combined them into a boosted 15/1 bet-builder for you.

These two sides have faced off 173 times in the Football/Premier League, with Arsenal coming out just on top with 74 wins. Newcastle have won 63 times, with 36 draws. Their first meeting was way back in 1893, a 2-2 draw at Arsenal. Newcastle followed that up just four weeks later with a 6-0 home thumping of the Gunners.

In recent times it's Arsenal who have completely dominated this fixture - winning their last eight straight games in all competitions! The last outing was a 2-0 home win for Arsenal with Saka and Martinelli getting on the scoresheet. 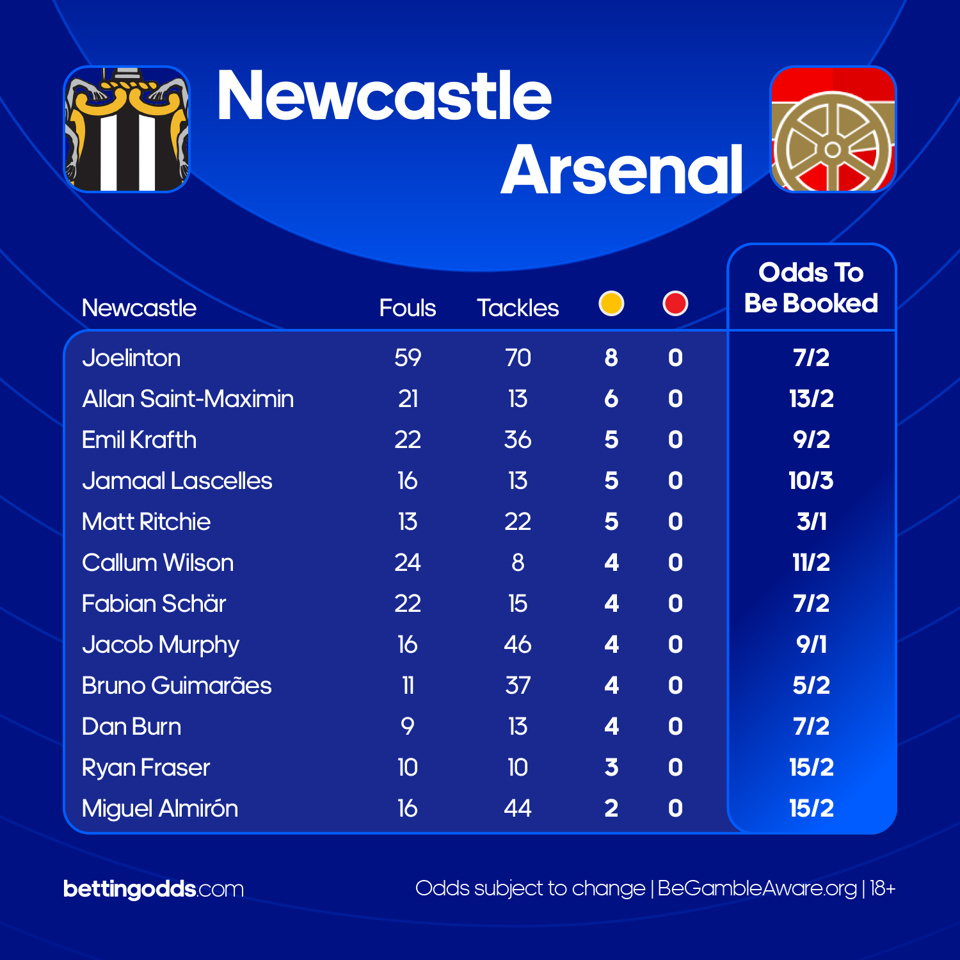 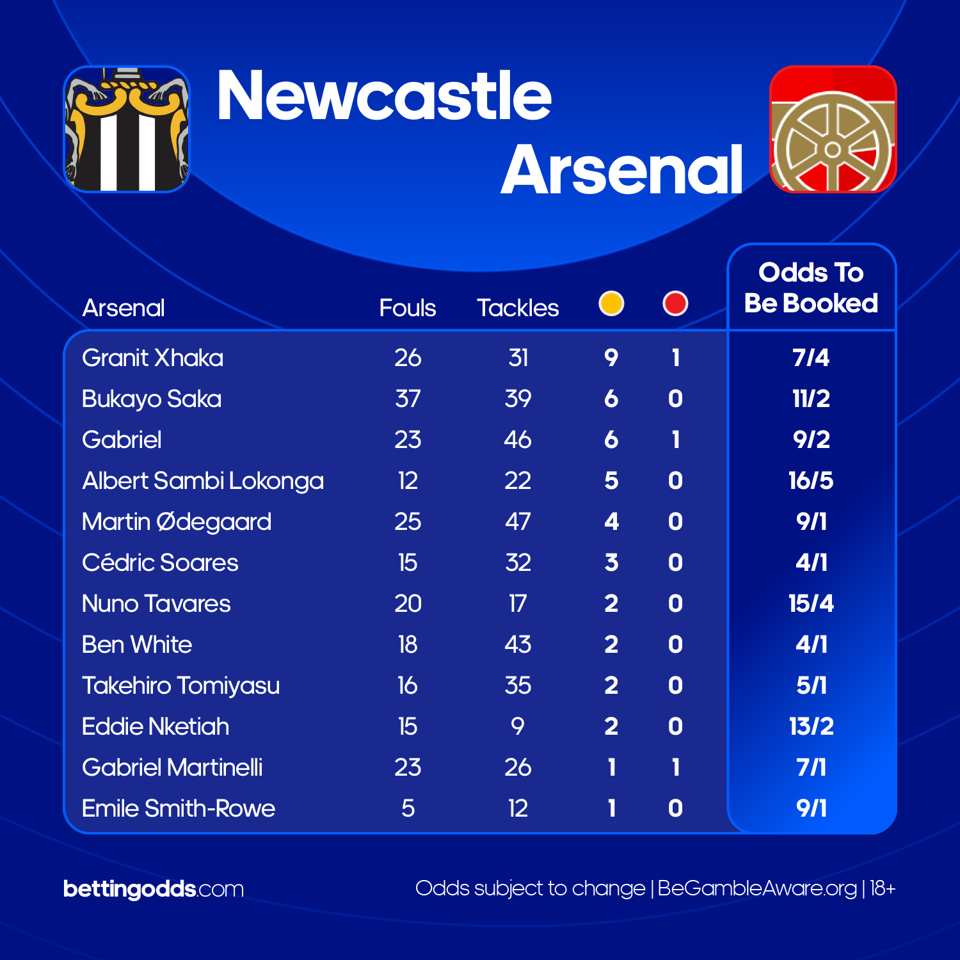 We start in the cards markets and other than the ubiquitous Granit Xhaka, it's Newcastle who are in the main shorter priced to be carded here. Newcastle have picked up 79 yellows compared to Arsenal's 57 in the Premier League. Arsenal picked up their fourth red card of the season against Spurs on Thursday and Mikel Arteta will be a little bit concerned about the discipline of some of his players.

Xhaka is as short as 7/4 to be carded here and I wouldn't put anyone off backing that, having picked up nine this season and one last time out against Spurs. However, its Joelinton who I'll be targeting here. The 25-year-old Brazilian has been a revelation this season under Eddie Howe who has converted him into a centre-midfield role. He will be up against the brilliant Bukayo Saka here, who was responsible for getting Ben Davies booked on Thursday -  a selection we tipped up in this very article.

Joelinton has eight cautions this season and has more than double as many fouls as the next Newcastle player. The 7/2 on offer at Paddy Power looks on the long side. 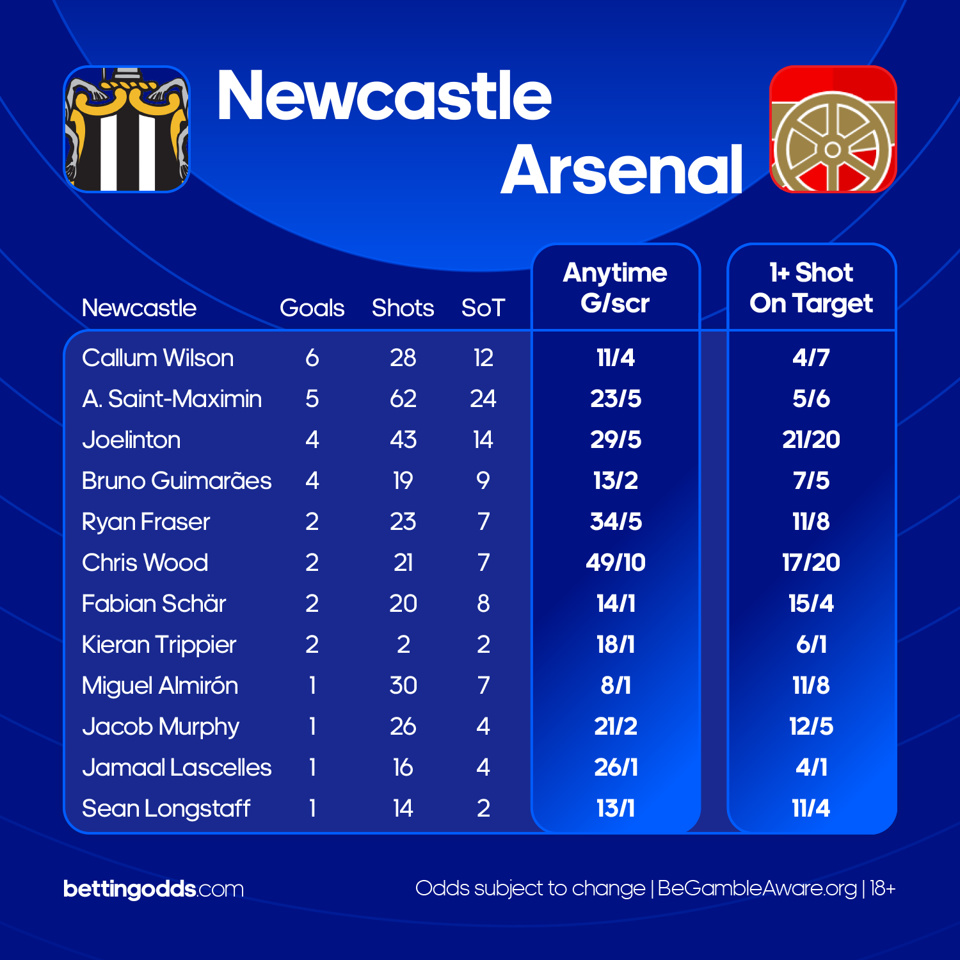 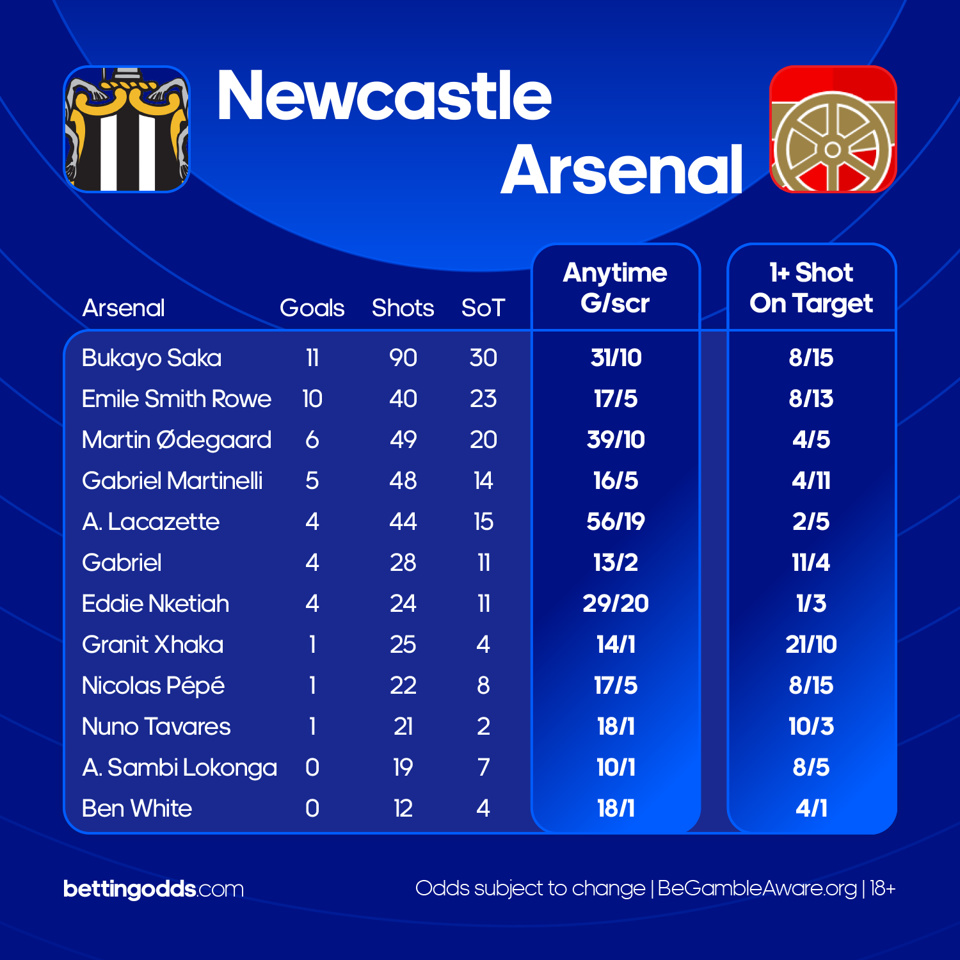 Next up we move into the goals and shots markets, I've targeted two players in these markets who I fancy to register a shot on target.

Newcastle's season was transformed with the signing of another Brazilian - Bruno Guimarães. The 24-year-old started his Premier League career like a house on fire, registering four goals in nine starts, with 19 shots and nine shots on target. He has cleared this line four times in his last five appearances.

Another man bang in form is Martin Ødegaard. The 23-year-old Norwegian has been the fulcrum of the team in midfield in recent months and has kept Emile Smith Rowe out of the starting line up.  Ødegaard has six goals and his shot output in recent weeks has gone through the roof. He has registered 19 shots in his last eight games and seven of those have hit the mark. He has five shots on target in his last two appearances.

The three selections marked out above are just 7/2, 4/5 and 7/5 but utilising Paddy Power's bet builder feature gives us a boosted price of 15/1. You can load the bet directly using the link below.

Joelinton to be carded, Odegaard & Guimaraes to have 1+ shot on target
15/1
Odds correct as of 2022-05-16 13:55 Odds subject to change.
Opt-in
Sign up for market leading stats and exclusive expert picks delivered to your inbox from next season
Click to sign up to receive tips
By clicking opt-in you agree to our privacy policy and terms and conditions below
Opt-in
Your Details
Complete your details below to enter:
Full Name
Email
SUBMIT
Please fill in both your name and email
Opt-in
SUCCESS!
Thank you for your submission.