Manchester United vs. Arsenal Bet Builder Tips: Mikel Arteta's Gunners have had a terrific start to the season but face their toughest test to date on Sunday
By Adam Roberts
15:00 Saturday 3rd September 2022 - 5 minute read

Sunday afternoon sees the fixture that dominated our tv screens and our thoughts throughout the 90's and 00's. Manchester United take on Arsenal with both sets of fans feeling buoyant after a good run of form. Manchester United have gone from rock bottom to 5th in the table, following three straight wins and new boss Erik ten Hag will be feeling much more comfortable in the Old Trafford hot seat. Mikel Arteta's Arsenal, meanwhile, are top of the table, have won five in five and are on the crest of a wave right now.

We've asked our resident statto Adam Roberts to take a dive into the recent history between Manchester United and Arsenal, and look into last season's stats to see if there are any angles which you can use to your betting advantage.

These two famous old clubs have played each other 236 times over the year, with Man Utd having a slight advantage, winning 98 to Arsenal's 85, with 53 draws along the way. Their first clash was way back in 1894, ending in a 3-3 thriller - that same scoreline can be backed at 45/1 on Sunday afternoon.

In recent times it's Arsenal who have held the upper hand, winning three of the last six, with two draws and a solitary Man Utd win. Cristiano Ronaldo scored three times in the two clashes last season and he's best priced 13/10 to repeat that feat again at the weekend.

Last six games in all competitions: 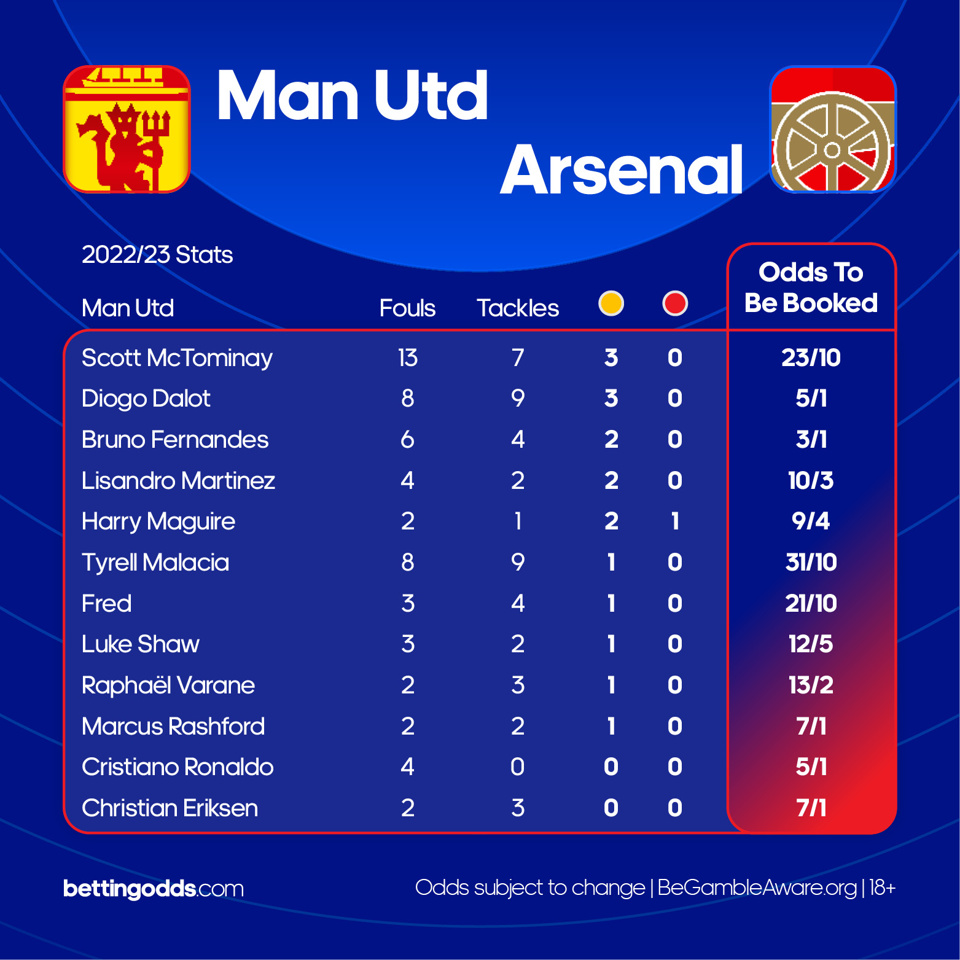 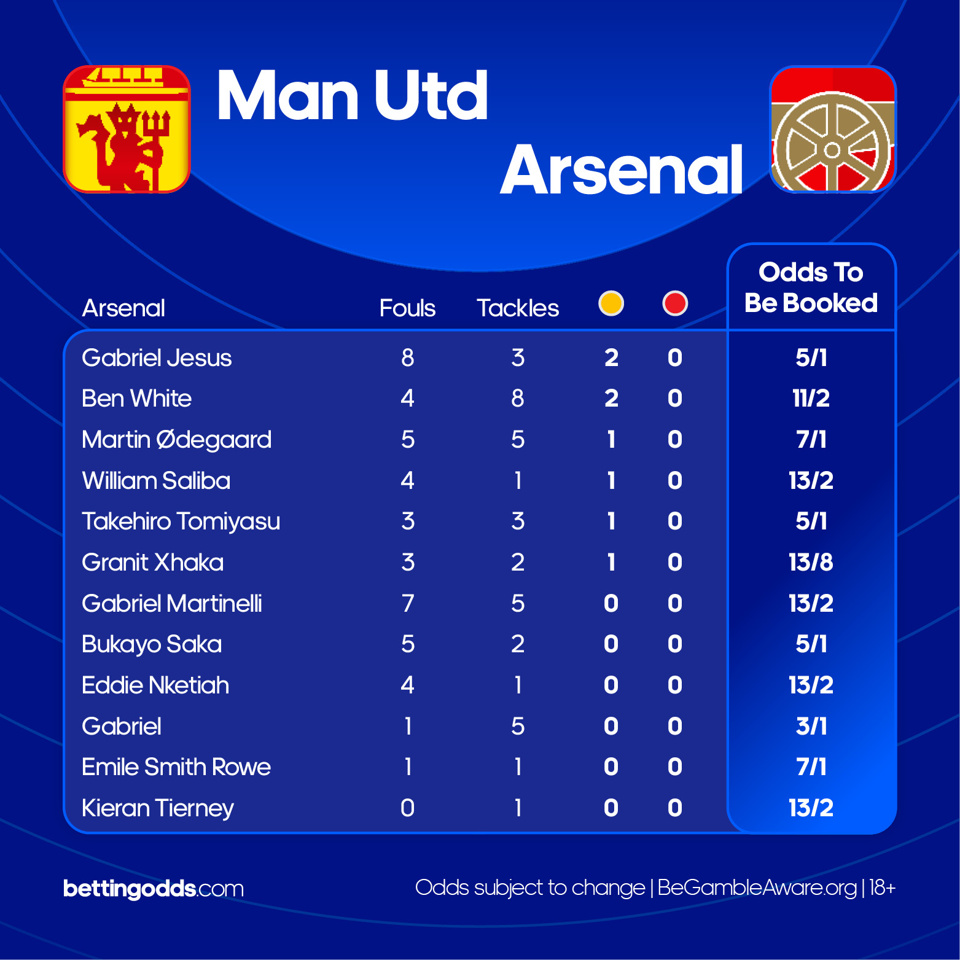 First up we've had a deep dive into the cards markets and it's immediately apparent that the Man Utd players are far shorter than their Arsenal counterparts (bar Granit Xhaka of course). One man who stands out to me is Diogo Dalot who has already picked up three yellow cards this season, coming in his last three appearances. He also picked up four cautions in 24 appearances last year. Dalot spent a season on loan at AC Milan back in 2020/21 and he admitted that his time at the Rossoneri helped him to improve defensively.

Since his return to Old Trafford the 23-year-old Portuguese has managed to fend off Aaron Wan-Bissaka and firmly established himself as the starting right back. Dalot is up against Gabriel Jesus and Gabriel Martinelli on Sunday who are two of the most fouled players in the Premier League this campaign. The 5/1 on offer looks exceptional value. 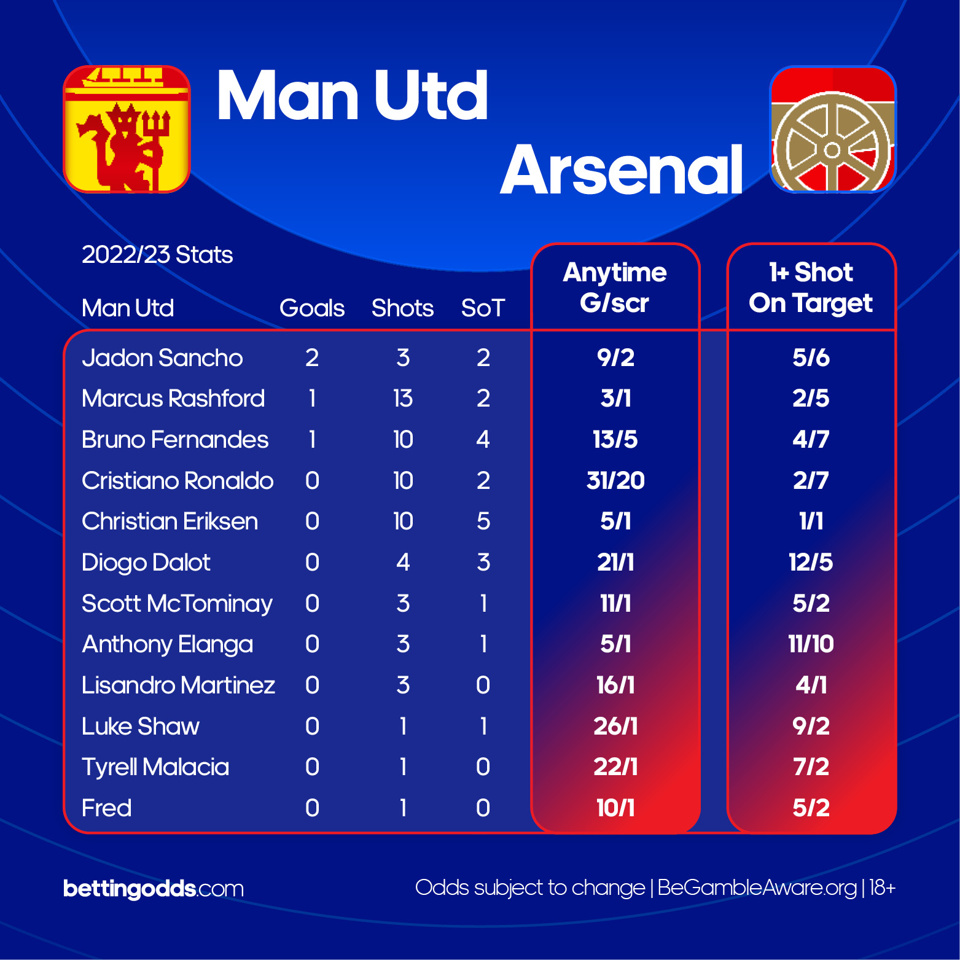 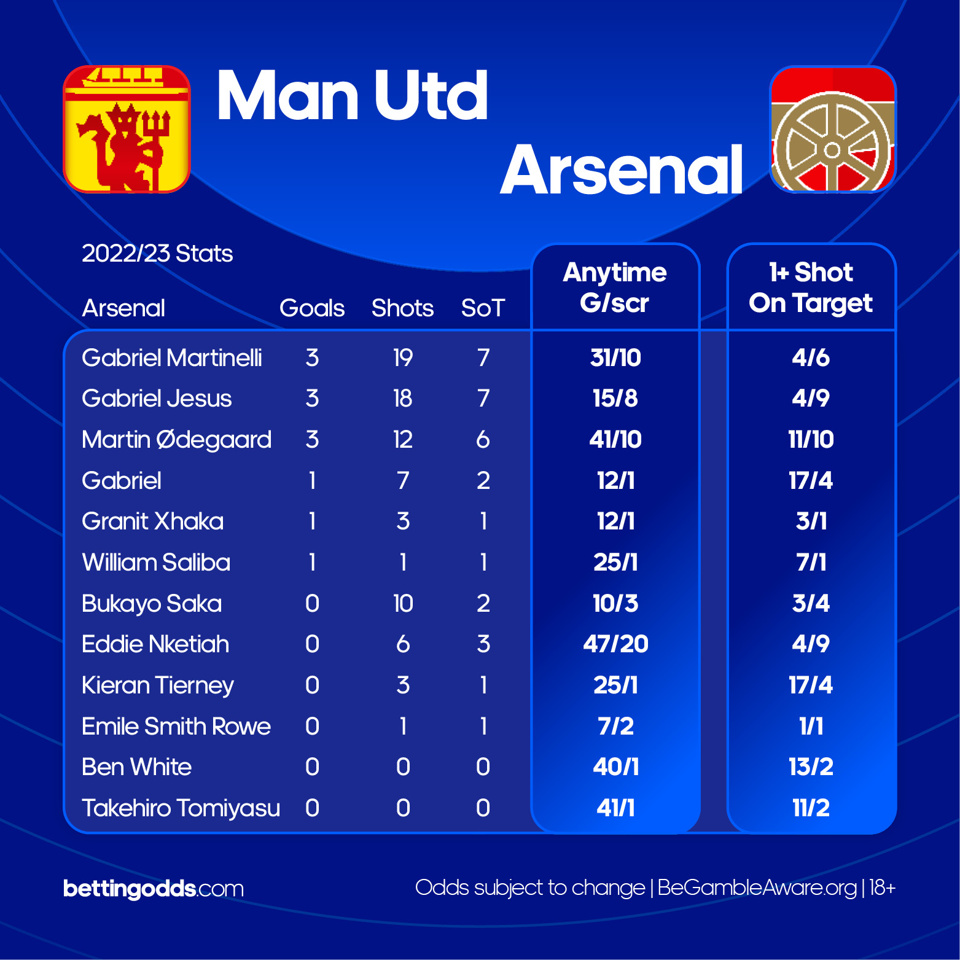 We move into the shots and goals markets and again Arsenal are shorter priced in the main, due to their 13 goals scored compared to United's five. The Gooners have let off 87 shots compared to the Red Devils' 64, with 32 SoT compared to just 21 for United. Arsenal have conceded just 11 shots on target against them, while United have allowed 23 in the same period.

We like the look of Gabriel Jesus to score anytime in the 90 minutes at 15/8. The Brazilian has been a revelation since his move from Manchester City and his goal return of three in five appearances doesn't really reflect his impact for the Gunners. The 25-year-old Brazilian has run defences ragged and also provided three assists for his team mates. Jesus is 2nd in shots (18) and joint leader in shots on target (7) for Arsenal and we think he will add to that on Sunday.

Another bet I like the look of is Gabriel to register a shot on target. The 24-year-old Brazilian has been a rock at the back for Arsenal and even though he was at fault for Fulham's goal on the 27th August, the big man made up for his error by netting his first goal of the season. Gabriel has managed a SoT in his last two outings and is a major threat from set pieces. He managed 29 shots in just 35 appearances last season with 12 of those hitting the target and five ending up in the back of the net. The 17/4 on offer looks on the large side, especially given he will be up against the much smaller Lisandro Martinez.

The three bets combined pay a best priced 22/1 at Paddy Power but not every bookmaker has their markets up at the time of writing, so this could be a bigger price come the weekend.

Dalot to be carded, Jesus anytime and Gabriel 1+ SoT
22/1
Odds correct as of 2022-09-02 12:50 Odds subject to change.
Opt-in
Sign up for market leading stats and exclusive expert picks delivered to your inbox from next season
Click to sign up to receive tips
By clicking opt-in you agree to our privacy policy and terms and conditions below
Opt-in
Your Details
Complete your details below to enter:
Full Name
Email
SUBMIT
Please fill in both your name and email
Opt-in
SUCCESS!
Thank you for your submission.