Harry Kane has scored and shown a card in two league games already this season and we fancy a repeat as part of our 160/1 Bet Builder
By Anthony Eadson
16:36 Thursday 29th September 2022 - 5 minute read
Bet £10 Get £30 In Free Bets (APP Only)
#AD New UK, IE & Malta customers only. 18+. Min £10/€10 first deposit using Debit Card or Trustly. Place a bet of £10 at min odds of 1.5. Free bets expire in 90 days. Full T&Cs apply.
£40 In Bonuses
#AD Place a qualifying £25 fixed odds bet at odds of 1/2 or greater. Qualifying bet cannot be placed in-play or cashed out early. A first free £5 fixed odds bet will be credited upon settlement of the qualifying bet. 4 x following £5 free fixed odds bets will be added to your account on consecutive days. Free bets and spins must be claimed within 28 days of opening. Free bet/spin stake not included in any winnings. Ts&Cs Apply. 18+ begambleaware.org
Bet £10 & Get £50 in Free Bets
#AD Bet £10 & Get £50 in Free Bets for new customers at bet365. Min deposit requirement. Free Bets are paid as Bet Credits and are available for use upon settlement of bets to value of qualifying deposit. Min odds, bet and payment method exclusions apply. Returns exclude Bet Credits stake. Time limits and T&Cs apply.
Up To £50 Money Back In Cash
#AD. New customers using code YSKWEY. Place 5 x £10 Sportsbook bets on any market at minimum odds of 2.0 (Evs), and get money back as Cash if it loses. Max refund per qualifying bet is £10 (up to £50 in total). Debit Card deposits only (Apple Pay excluded). T&Cs apply. 18+ begambleaware.org
Bet £10 Get £60 in Bonuses
#AD New UK customers only. Register using the promo code BETFRED60, deposit and place first bet of £10+ on Sports (cumulative Evens+) within 7 days of registration. First bet must be on Sports. £20 in Free Bets to be used on Sports, £10 in Free Bets to be used on Lotto and 50 Free Spins (20p per spin) credited within 48 hours of bet settlement. Further £20 in Free Bets credited 5 days after settlement. Bonuses have a 7-day expiry. Payment restrictions apply. SMS verification and/or Proof of I.D and address may be required. Full T&Cs apply.
Bet £10 Get £40 In Bonuses
#AD 18+ New customers only. Opt in and place a £10 bet on Horse Racing at odds of 2.00+ within 7 days of opening a new account; excludes cashed out bets. Receive 3x £10 Horse Racing Free Bets, valid on set events only at odds 2.00+. Plus, a £10 Slot Bonus, selected games, wager 20x to withdraw a max of £250. Bonuses expire in 7 days. Card payments only. T&Cs Apply. Please Gamble Responsibly.

What a weekend of football we have ahead of us in the Premier League with the 10-game slate kicking-off with the North London derby on Saturday lunchtime. Heading into Gameweek 9, The Gunners currently sit top of the pile, while their rivals Spurs are just a point behind them in third!

We’ve asked our resident Premier League analyst @AnthonyEadson to take a look at some player stats and pick out a Bet Builder he likes the look of. This week he’s used bet365 to pick out a whopping 160/1 longshot which you can read about below.

Historically, North London derbies have the tendency to be a little bit wild and as we can see from the above, Over 2.5 goals has landed in five of the last six meetings. 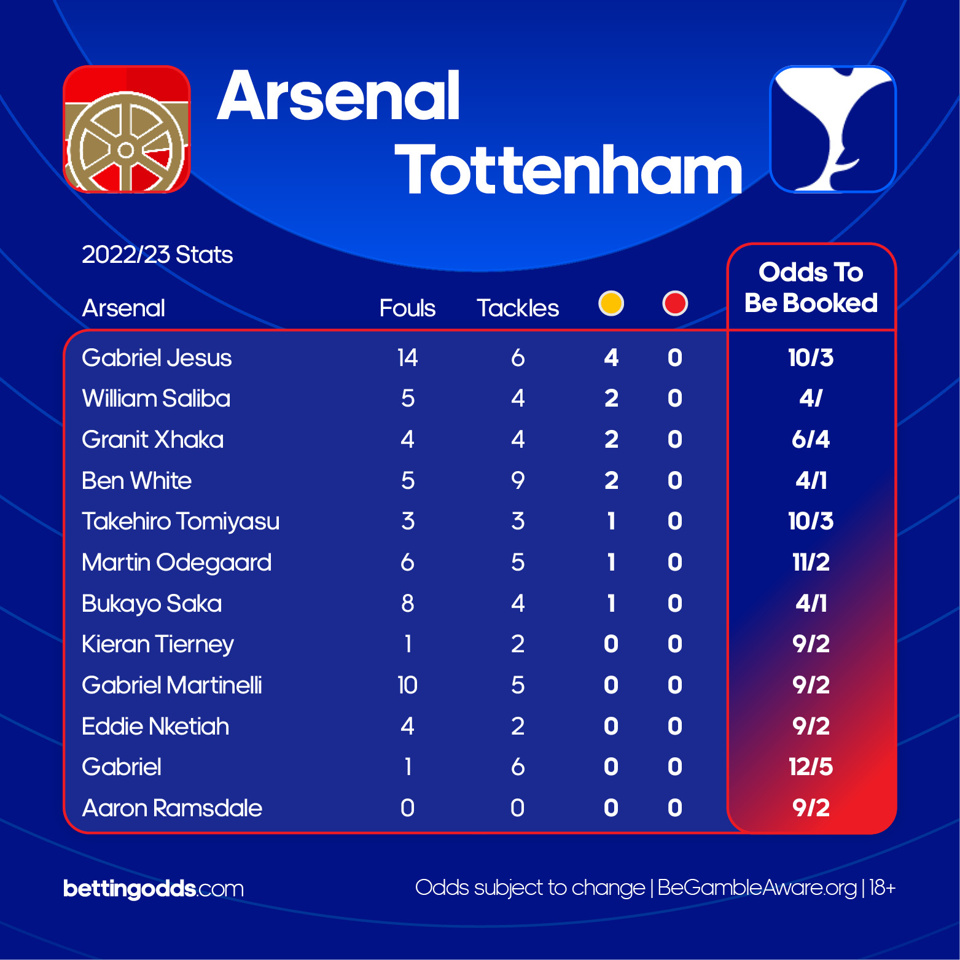 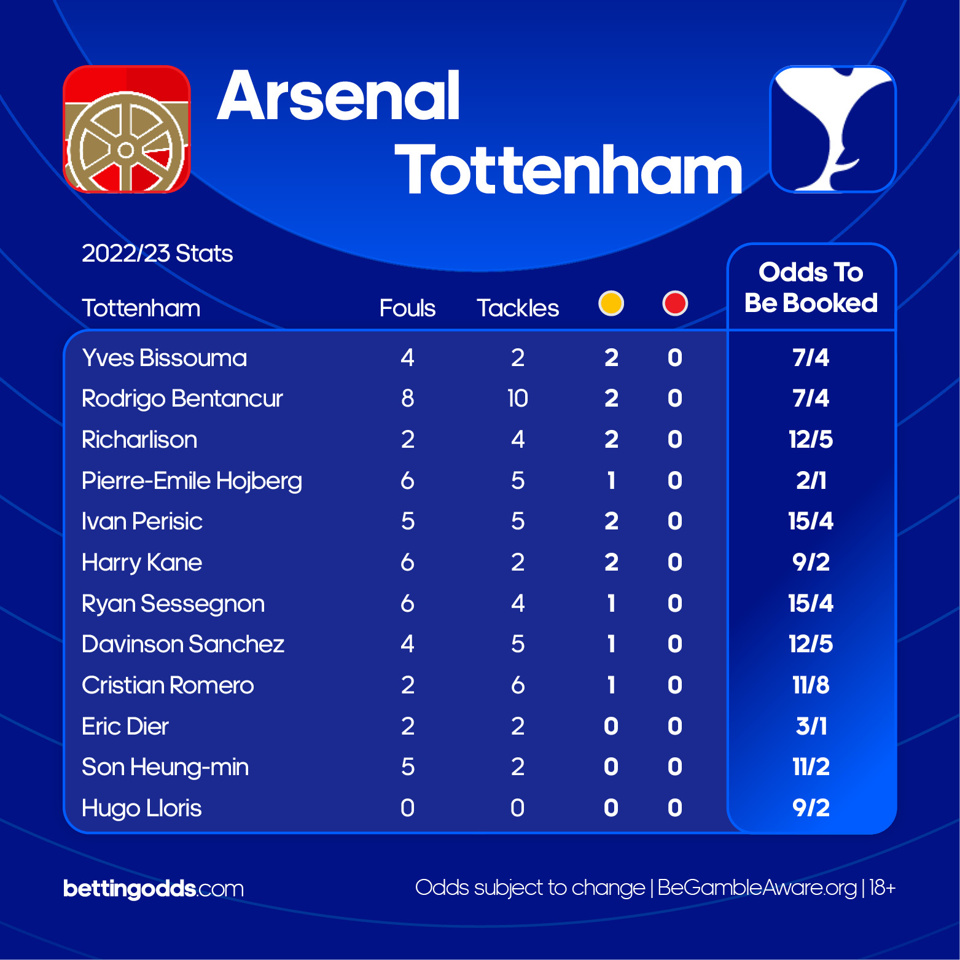 Moving on to the cards and tackles, let’s start with Mikel Arteta’s Arsenal. The Gunners have been shown 13 yellow cards so far this season, four of which have been shown to their summer signing Gabriel Jesus. That’s the most of any player at the club so far this term and the Brazilian also tops the ranks in terms of fouls, racking up 14 in just seven top-flight appearances. Jesus can be found at a best price of 7/2 to be carded by referee Anthony Taylor on Saturday which is available with both Betfair and Paddy Power.

Card merchant Granit Xhaka is sure to be a popular choice with many punters and has already received two yellows already this season. However, at a top-price of just 6/4 he’s not the most attractive of prices despite his disciplinary record.

For Spurs, no player has picked up more than two cautions so far in the 2022/2023 season. Harry Kane, Rodrigo Bentancur, Yves Bissouma, Richarlison and Ivan Perisic all have two yellows to their name this term, however it’s worth noting that Harry Kane racked up more fouls than any other player in the squad last season with 42 and can be backed at 9/2 to be shown his fifth yellow card in 16 league appearances against Arsenal on Saturday. 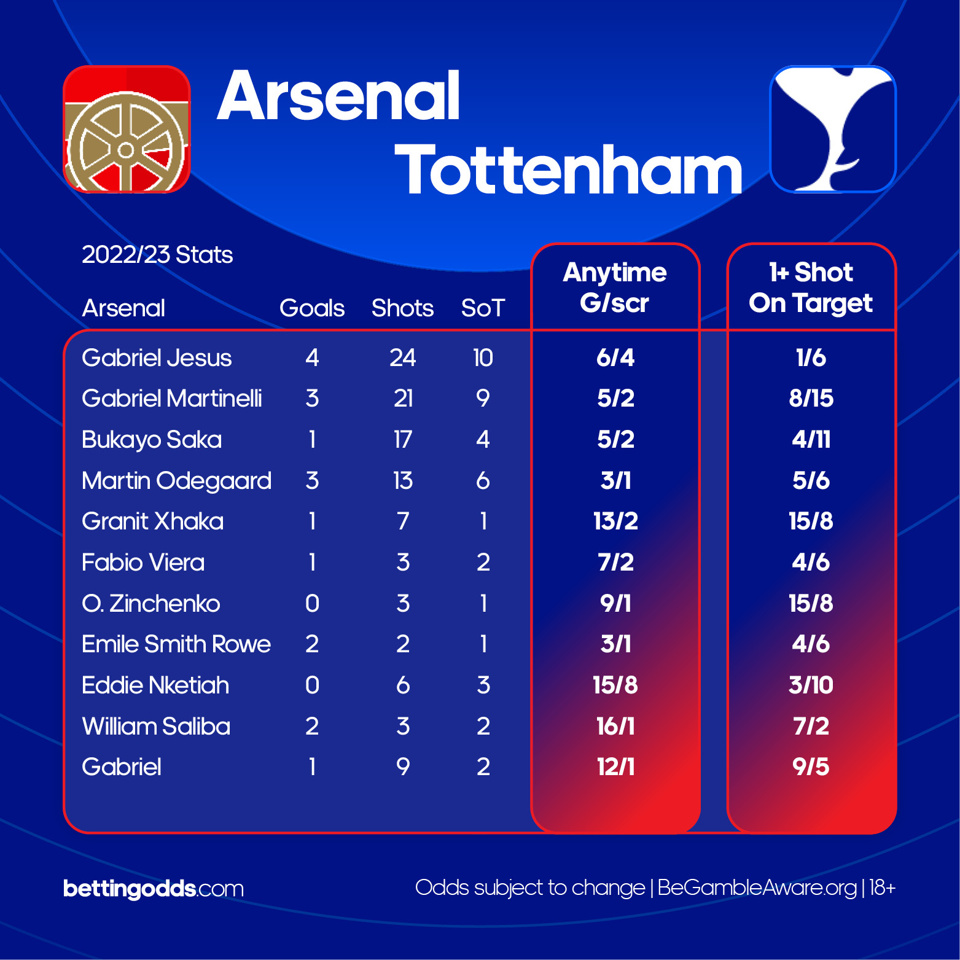 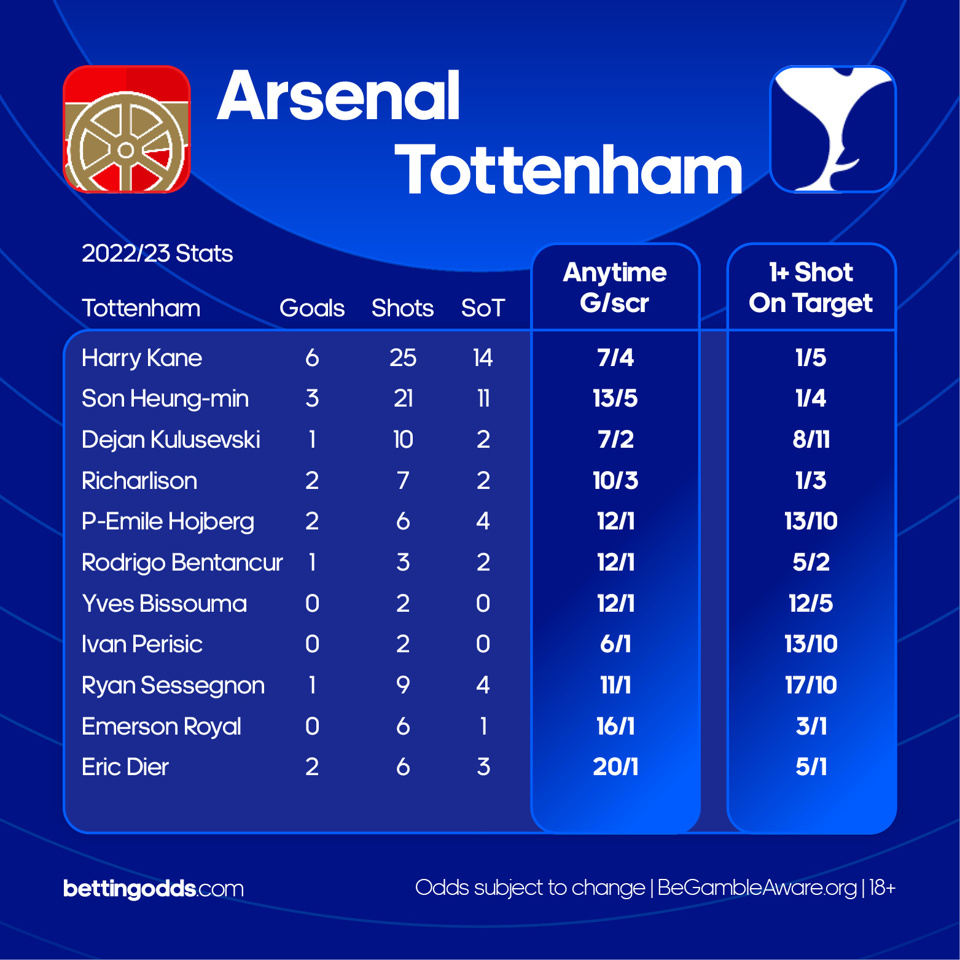 Leading the way for Arsenal this season in terms of goals and shots is Gabriel Jesus who has made a positive start to the campaign with four goals in seven appearances. The former Manchester City man is averaging 3.4 shots per game and 1.4 shots on target per game for his new employers and is the shortest price of any player across the two teams to score at 6/4 with bet365.

Fellow Brazilian Gabriel Martinelli is also worth some consideration in these markets with an average of 1.3 shots on target per game, along with Martin Odegaard who has racked up six attempts between the sticks in six appearances.

Prior to his 13 minute hat-trick against Leicester last time out, Son Heung-min had failed to score in his six Premier League matches this season, but with his confidence returning he looks an appealing price at 4/7 & to register a shot on target, or 13/5 to find the back of the net.

Harry Kane has six goals to his name this term and once again proved he is one of the best penalty takers on the planet with an emphatic finish from the spot against Germany on Monday evening. Kane can be found at a best price of 1/3 (BetVictor) to register a shot on target, something he has done in every game so far this season and at 9/5 (Unibet) to score anytime.

As mentioned above, North London derbies can really descend into chaos at times with both a high goal and card count often featuring. With this in mind, I’ve picked out a longshot consisting of both Gabriel Jesus and Harry Kane to score and be carded at 160/1 with bet365.

Jesus has made a really strong start to his life in an Arsenal shirt and looks to be happy and high on confidence, something he lacked at Manchester City at times, often showing us the face of a small child who’d had his toys taken off him. The Brazilian loves to press and has transformed Arsenal’s attack this term, although his timing when tackling is not always great as shown by the 14 fouls and four yellow cards in just seven matches!

I’ll be pairing this with Harry Kane to score and be carded. Kane ranked highest when it came to fouls committed for Spurs last season with 42 fouls and five bookings. This season he has already scored and been shown a card in two of his seven appearances and with four yellows in 15 league matches against Arsenal, I’d have him a shade shorter than the 9/2 that several firms have for him to pick up a card from Anthony Taylor.

Obviously we are asking for a lot here with two scorers and two bookings, but at 160/1 I think this is worth a bit of shrapnel.

Poland vs. Argentina Bet Builder Tips: Back Messi To Score In Our 6/1 Poke

Saudi Arabia vs. Mexico Betting Tips: Back Both Teams to Score at the Lusail Stadium