Tottenham vs. Arsenal Betting Tips: We've scoured the stats and picked out a boosted 16/1 bet builder 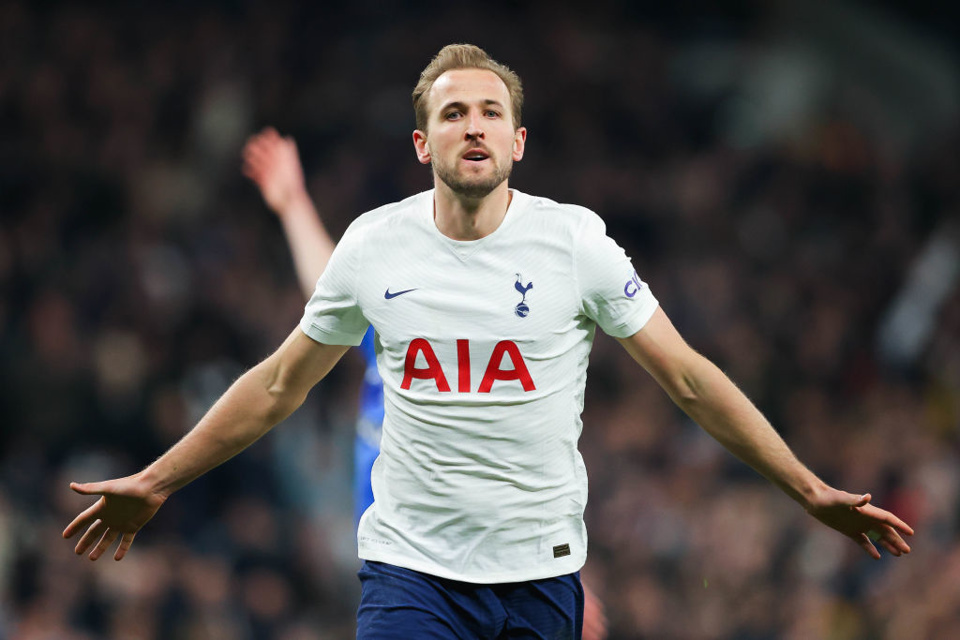 There is a massive game taking place in the Premier League on Thursday. Tottenham take on Arsenal in a match that could have huge implications in the race for the final Champions League spot. Just one spot and four points separate these bitter rivals and a win here for Spurs could see that shrink to just one point with two games to play. We've asked our statman @OddsT3rrier to take a deep dive into the recent history between the two sides, and look into this season's stats to see if there are any angles which you can use to your betting advantage. He's also selected three picks and combined them into a boosted 16/1 bet-builder for you. 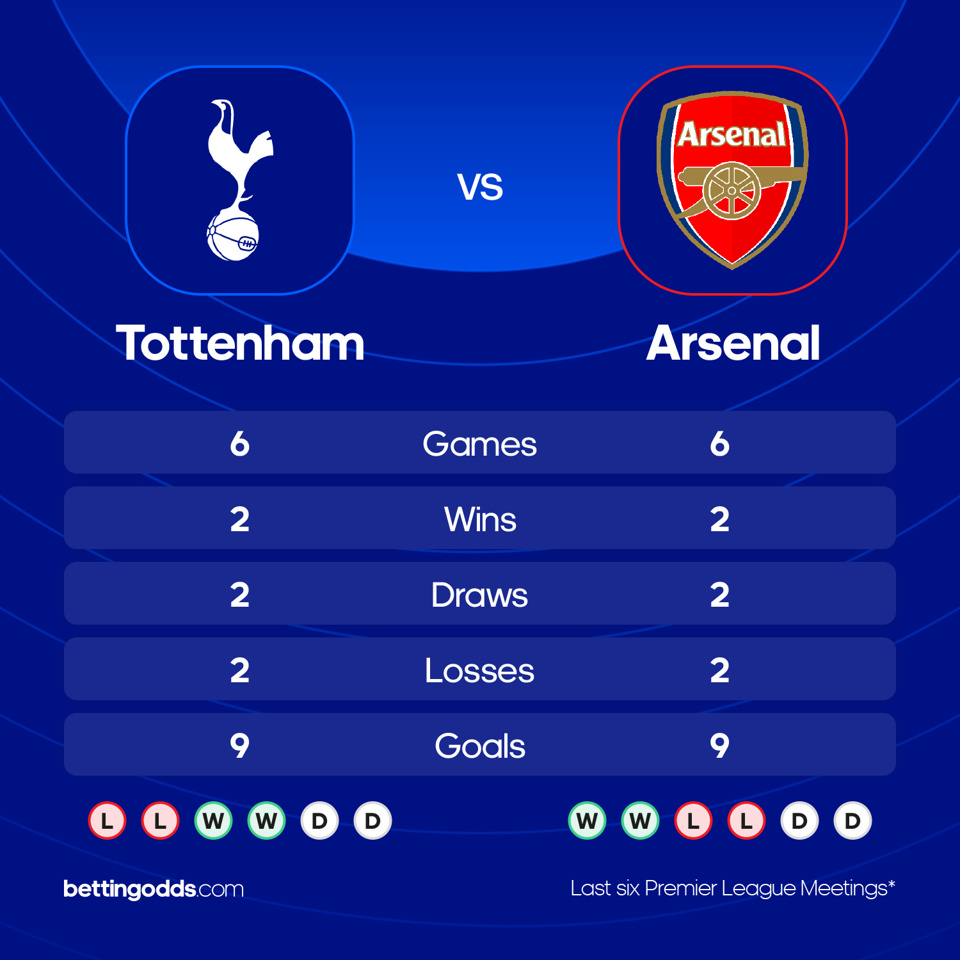 The rivalry between these two old famous clubs dates all the way back to 1909, when Arsenal were the 1-0 victors. Since then, the two have played over 160 more times and its Arsenal who have had the better of the North London derby over the years. The Gunners have clocked up 68 wins, there have been 47 draws and Spurs have taken the spoils 54 times.

In recent times however,  the honours have been shared; the last six meetings in the Premier League have seen two wins for each side with two draws. When we narrow it down to games at Tottenham, Arsenal are on a torrid run, losing five and drawing two and are winless since 2014 when they won 1-0 via a Tomas Rosicky goal.

Harry Kane has scored seven times in his last seven derby matches at home and 11 in 14 derby games overall. 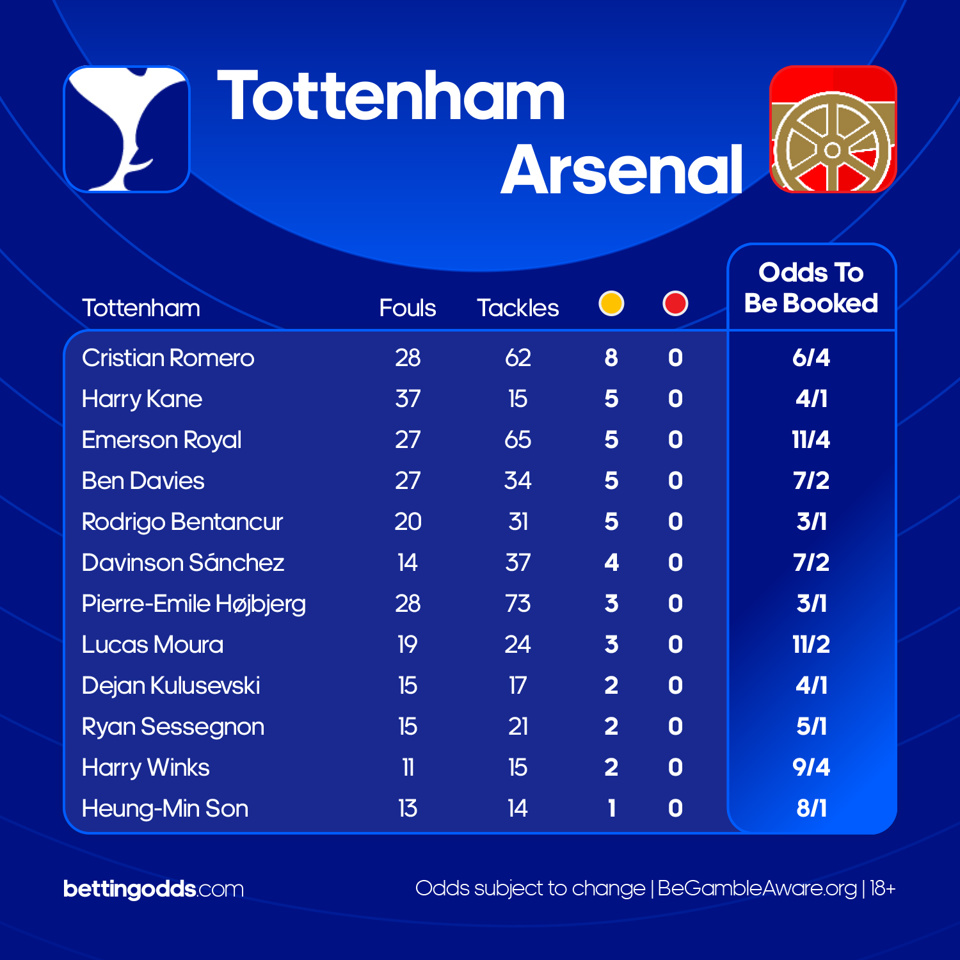 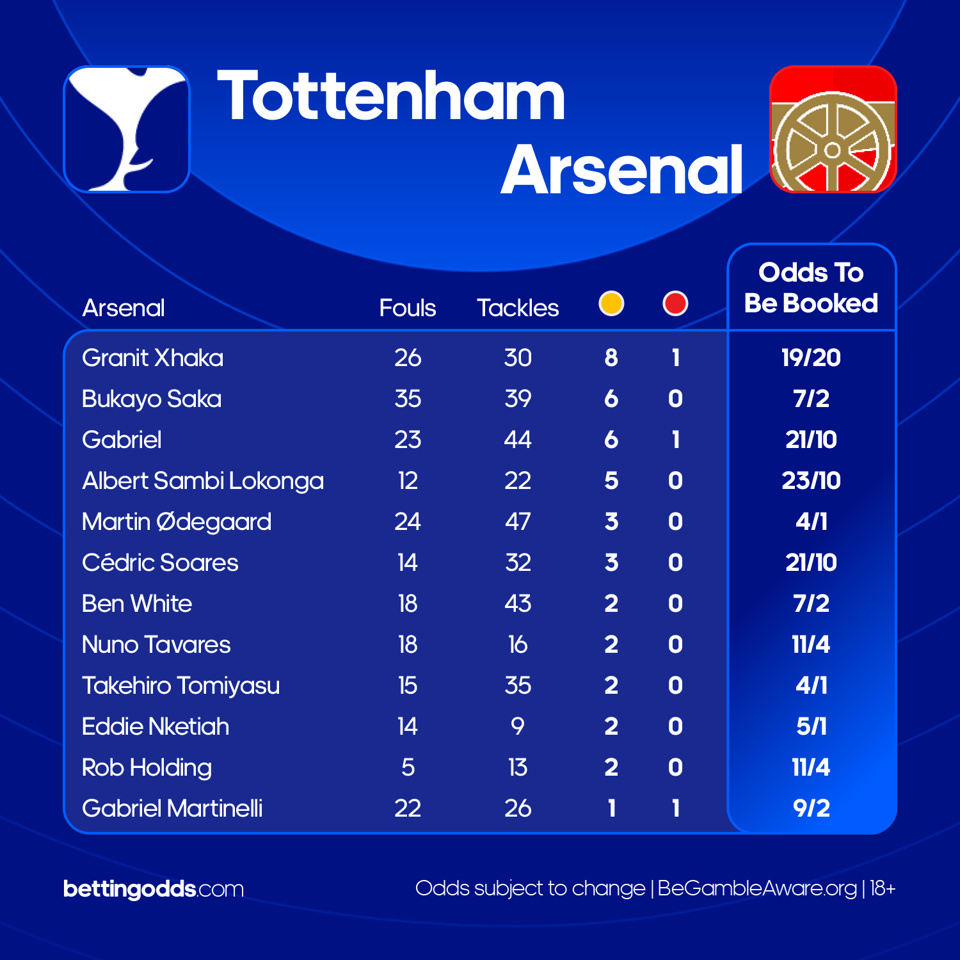 We start our data study with the cards markets and one thing that is immediately obvious is that Arsenal are in the main shorter than their Spurs counterparts to be carded. That is a fairly usual state of affairs for an away team, especially in the raucous atmosphere of a derby match but it's actually Tottenham who have the worse disciplinary record this term, with 62 yellows and 1 red compared to 54 yellows and 3 reds. The North London derby also holds the dubious honour of the dirtiest derby fixture in Premier League history with 246 yellow cards shown since the 1992/93 season, explaining the short prices on offer here.

Heading the market, of course, is our old favourite Granit Xhaka who is as short as evens to be booked in this one. Looking back at his record in this fixture and he's been booked in six of the last nine North London derby matches, so that could still represent some value.

Another name that stands out to me here is Ben Davies. The 29-year-old Welshman has picked up five yellow cards this season and is joint fourth for fouls for Spurs. He's picked up cautions in his last two games and here is against the trickery of Bukayo Saka. The 7/2 on offer looks value to me. 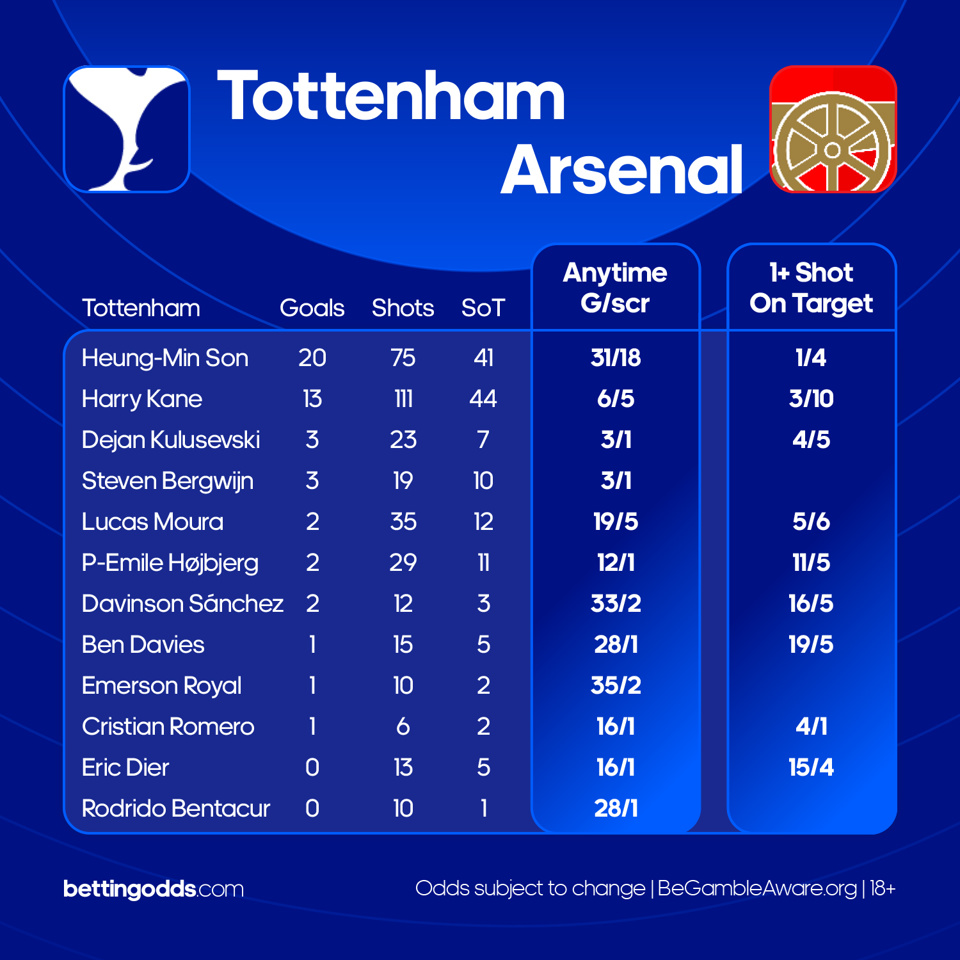 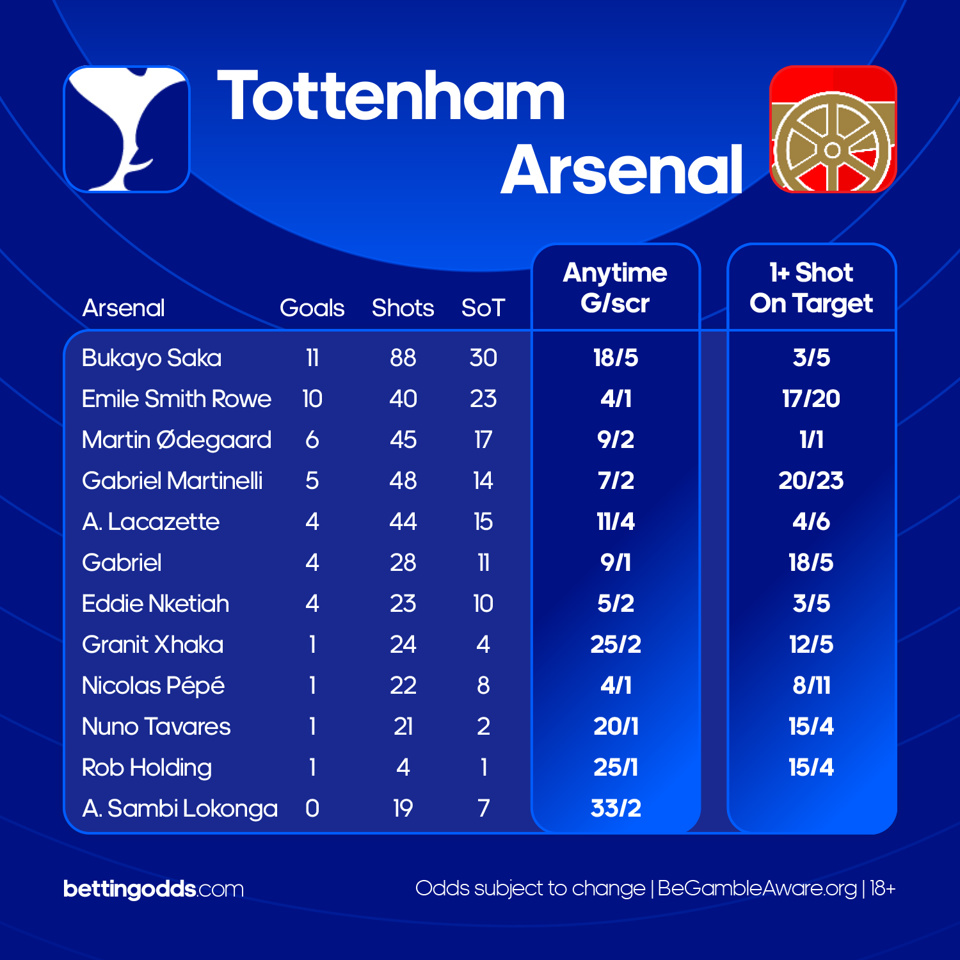 The dynamic duo of Kane and Son, of course lead the way in the shots and goalscorer markets. Kane (3/10) and Son (1/4) are way too short to be backing for 1+ shot on target. Kane in particular has only cleared this line once in his last six games and is on a bit of a barren streak. However, he does lift his game for the NLD and has scored seven in his last seven derby games at Spurs home ground. With the big Englishman on penalties, I prefer backing him in the anytime goalscorer market at 6/5.

Another man who is smashing it in the shots markets is Arsenal winger Bukayo Saka. The 20-year-old England international has almost double the amount of shots of any other Arsenal player and also leads the Gunners for both shots on target (30) and goals (11). Saka has cleared 1+ shot on target in his last five matches and 15 of his last 18 games. The 8/11 on offer therefore offers us excellent value. He's as high as evens at skybet with a boost too if you have an account there.

I've combined the Saka, Kane and Davies picks , which has been boosted out to 16/1 by the good people at Paddy Power. You can load the betslip direct by using the link below.

Ben Davies to be carded, Harry Kane to score and Bukayo Saka 1+ shot on target
16/1
Odds correct as of 2022-05-11 12:00 Odds subject to change.
Opt-in
Sign up for market leading stats and exclusive expert picks delivered to your inbox from next season
Click to sign up to receive tips
By clicking opt-in you agree to our privacy policy and terms and conditions below
Opt-in
Your Details
Complete your details below to enter:
Full Name
Email
SUBMIT
Please fill in both your name and email
Opt-in
SUCCESS!
Thank you for your submission.