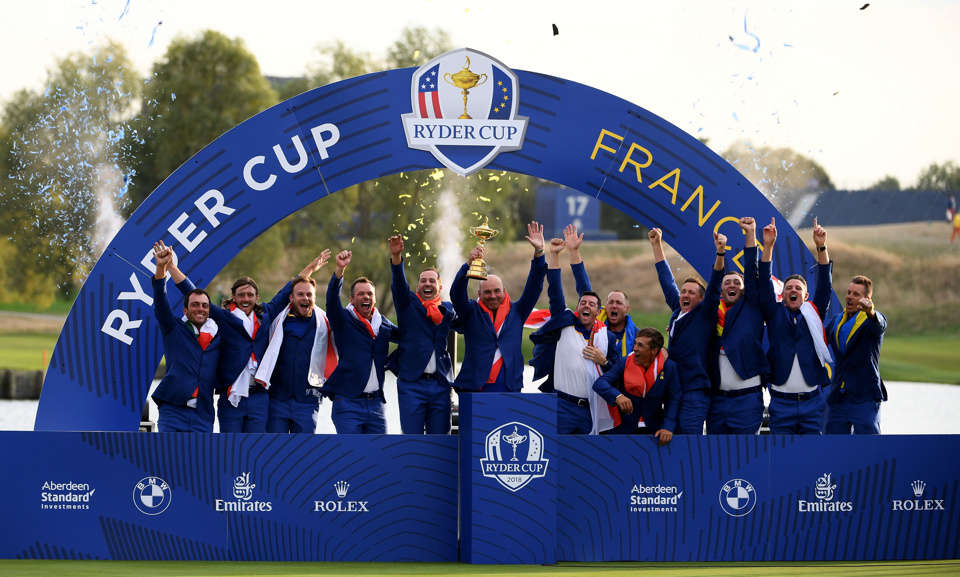 Ryder Cup Odds: Europe lifted the trophy in 2018, but it's the USA who are favourites coming into the event at Whistling Straits
By Anthony Eadson
09:18 Wednesday 22nd September 2021 - 5 minute read

The Ryder Cup is one of the world's greatest sporting events and golf fans across the globe now have just 10 days until this year's competition takes place. The 2021 Ryder Cup begins on Friday 24 September and here at BettingOdds.com we’ve taken a look at the format, the teams and the all important odds to lift the trophy.

So who will lift the Ryder Cup this time round? According to the bookmakers it will be the USA who are favourites at a current best price of 8/15 with Paddy Power and Betfair. That’s a 65% implied probability that Steve Stricker’s side will be victorious at Whistling Straits who lifted the cup the last time it was played on home soil in 2016. 9/4 is on offer for those wishing to get behind team Europe while the draw can be backed at 12/1. You can find a range of markets below and if you are having a bet, please do so responsibly.

There's an abundance of player prop markets available for the Ryder Cup and the bookmakers have gone all out providing us with a host of betting opportunities.

Top points scorer is always a popular bet, with world number one Jon Rahm the favourite to be the top combined points scorer from both teams trading around the 7/1 mark.

Our resident golf tipster Jamie Worsley has tipped up 18/1 chance Collin Morikawa in this market and you can read his reasoning below in his Ryder Cup preview.

If you want to delve a little deeper you can bet on the top points scorers for each team and even some of the nationalities. Half of the European team is made up of Englishman and you can bet on who will be the top scoring Englishman at the Ryder Cup, with Tommy Fleetwood and Paul Casey heading the betting.

Other popular markets include top rookie, the players who are playing in a Ryder Cup for the first time, nine in total and six of whom are appearing for Team USA. There are only three European rookies and Norway's Viktor Hovland heads the betting where he's an odds on favourite.

Finally there's betting on who will be the top wildcard, selected by the captains, the US have six wildcards headed by Jordan Spieth who has a good record in matchplay whilst Europe's wildcards include Sergio Garcia, Shane Lowry and Ian Poulter.

In 2018 Europe were victorious when the event was held in France and this time round they will travel across the pond to take on the USA at Whistling Straits in Wisconsin. An open and rugged course set along the shoreline of Lake Michigan, Whistling Straits is 7,390 yards in distance and should suit some of the bigger hitters in the game.

Twelve players will represent each team, along with a captain and their two deputies. For team Europe, Padraig Harrington is the captain, with Martin Kaymer and Graeme McDowell as his vice captains. USA’s leadership team consists of captain Steve Stricker, along with deputies Phil Mickelson and Fred Couples.

After Sunday’s PGA BMW Championship at Wentworth on Sunday the qualification window closed for the final places and the full list of players taking part can be found below.

The Ryder Cup runs from Friday through until Sunday with 28 matches being played over the course of the weekend. The foursomes and four-balls are played over Friday and Saturday with a full round of singles on Sunday.

A foursome match is where two pairs of golfers compete over the course, with team-mates hitting alternate shots of the same ball.

A four-ball contest is similar however, each golfer plays their own ball and it is the best score of the pair which contributes to their total.

Each match is worth one point and in the result of a drawn match, half a point is given to each team. 28 points are available in total with 14½ required to win the Cup and 14 points being required for the defending champions to retain the cup.

RSM Classic 2021 Betting Tips as BettingOdds.com provide their Betting Preview for the event and provide their…

Jamie Worsley tips up this week's even on the European Tour - The Dubai Championship.