Roberto Mancini vs Gareth Southgate: Who will win Euro 2020?

When it comes to club level management, there’s really no comparison.

One manager has won a Premier League crown, a hat-trick of Serie A titles, and plenty of domestic cups. The other was relegated with Middlesbrough.

One has overseen seven clubs in four different countries, winning hundreds of matches. The other has all of 29 Premier League victories on his CV.

But, when it comes to the international arena, both bosses have galvanised a nation and propelled their respective countries to within touching distance of glory.

Roberto Mancini vs Gareth Southgate at Wembley, it’s going to be a cracker.

The two stylish protagonists will go head-to-head for the first time in London on Sunday night. For Italy, it will be their tenth major final, while the men’s England team will rock up at a showpiece spectacle for only the second time in their history, and first in a staggering 55 years.

Southgate’s England have been installed as the 17/10 favourites to deliver the trophy on home soil. Mancini’s Italy are priced at 2/1 to come out on top, whereas a draw is also available at 2/1. Sign up with William Hill and you can back either country at 30/1 to win Euro 2020.

Leading up to the tournament we wrote a piece detailing why Roberto Mancini could lead 12/1 shots Italy to glory at Euro 2020; at a time when the Italians weren’t being considered among the main cluster of favourites.

We spoke about Mancini’s commendable three-year rebuilding job, how he’s blended youth and experience to create an exciting, high-energy and cohesive side who had previously lacked direction, unity, and confidence.

It’s worth remembering that prior to Mancini’s appointment in 2018 the Italians had crashed to a nadir after they missed out qualifying for a World Cup for the first time since 1958.

Mancini’s since accumulated 38 games at the helm of The Azzurri. He’s lost just twice and not since September 2018. He boasts a 73.68% win rate, is unbeaten in 33 matches, with France are the only country to breach Italy’s defence more than once in a single game.

Going undefeated in nearly three years is impressive at any level, but it’s the different ways that Italy have won games at Euro 2020 that’s likely to have pleased Mancini. There were straightforward successes against the likes of Turkey and Switzerland, a hard-fought victory in extra-time against Austria, they hung on against Belgium, then held their nerve to topple Spain on penalties in the semi-final. 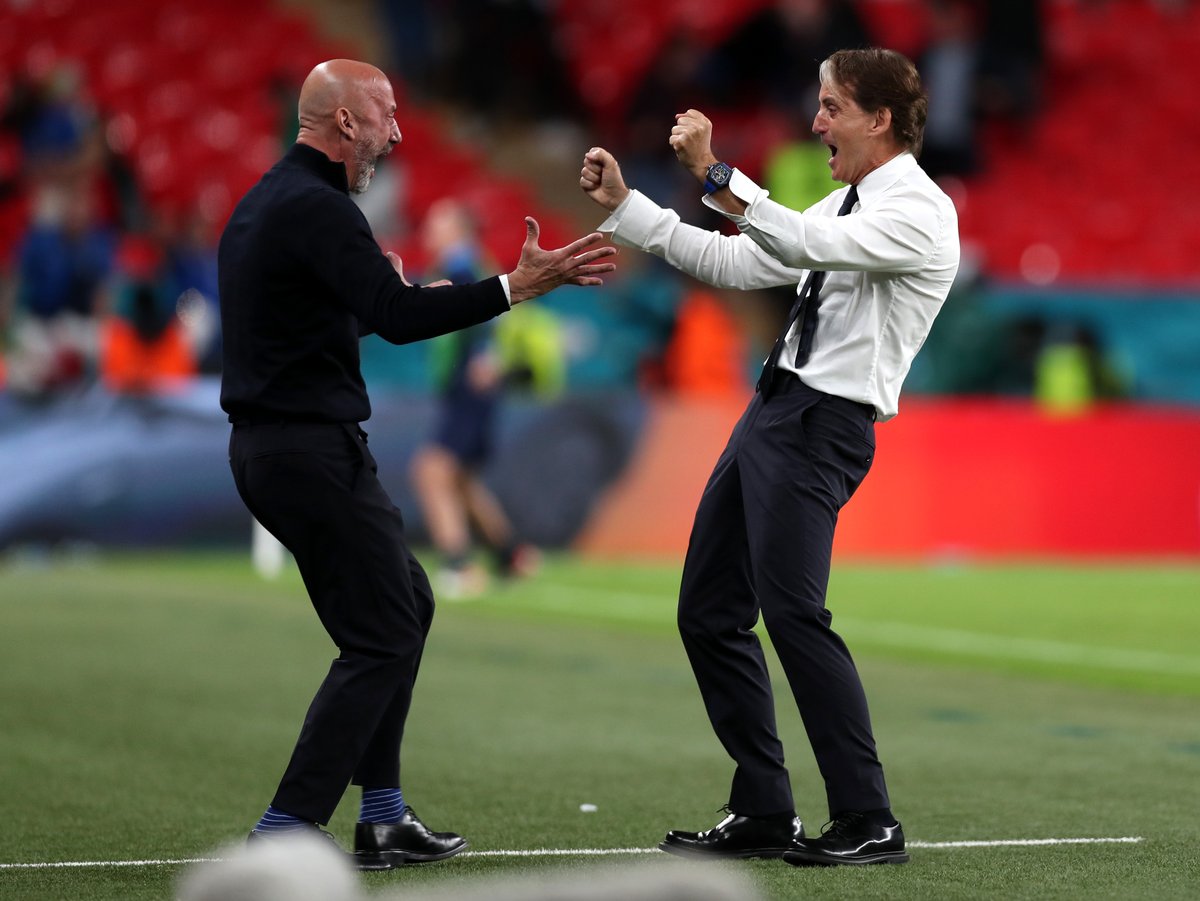 Giorgio Chiellini and Leonardo Bonucci have excelled at the back ahead of the young but already very experienced shot-stopper Gianluigi Donnarumma. Jorginho has been touted as a possible Ballon d'Or-winner, Federico Chiesa has electrified, Marco Verratti is always a delight to watch, while Leonardo Spinazzola was absolutely brilliant before he suffered a devastating injury.

The enviably suave Mancini famously ended Man City's 35-year wait for a trophy, then went on to win the Premier League in dramatic fashion. He’s now on the cusp of making Italy European Champions for the first time in 53 years.

What a man. What a manager. ❤️

Italy have never lost to England at a major tournament, but Southgate is used to breaking boundaries and changing narratives.

After becoming the first England manager in just shy of 30 years to reach a World Cup semi-final, the 50-year-old has just become the first of his countrymen to propel The Three Lions through to the last-two of a European Championship. His tally of nine knockout-stage wins surpasses that of even World Cup winner Sir Alf Ramsey.

Like Italy, England have multiple reasons to be confident: They are unbeaten in a dozen games - 11 of which have been wins - have won 15 of their last 17 at Wembley, and have only conceded one goal all tournament; and not yet from open play.

Southgate, 8/11 to be Knighted (Ladbrokes), and his coaching staff have been an oasis of calm and composure as emotion, tension, and expectation bubbles around them. Not everyone has agreed with his team selections, substitutions, or tactics but to his credit Southgate has refused to panic, instead staying true to his principles. After leading England to a first major final in 55 years his critics have disappeared into the shadows.

After blanking in the group stages skipper Harry Kane now has four goals to his name and the Golden Boot in his sights at a tasty 6/1. Raheem Sterling (20/1 for the top goalscorer accolade) has arguably been England’s best player, and is 7/4 to be named the Player of the Tournament.

19-year-old Bukayo Saka has stepped up to the plate superbly, the defence has conceded once in 540 minutes of tournament football, and Southgate does of course have an array of exciting options to turn to off the bench. 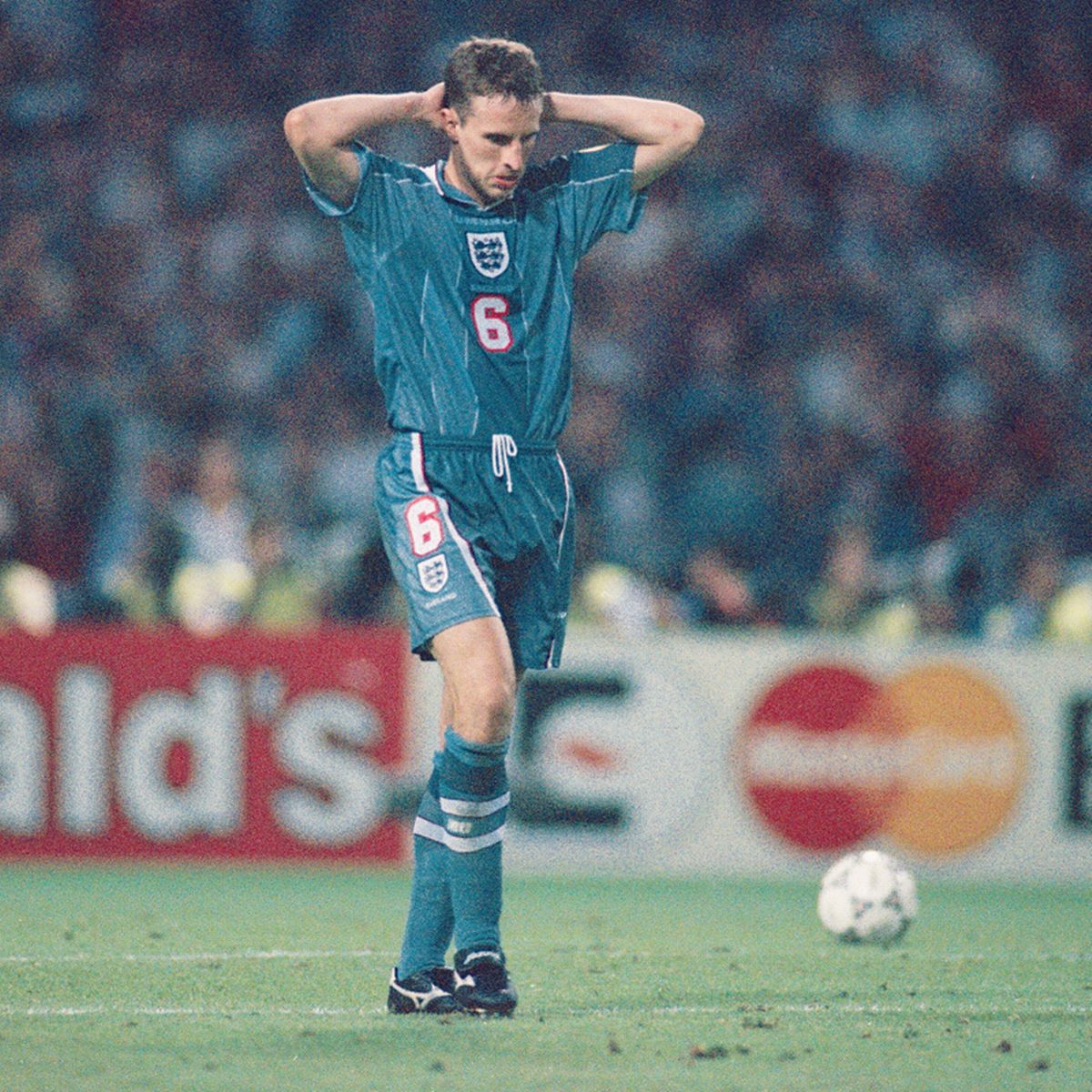 "Weirdly I texted him the other day, to say congratulations, because I felt so proud to be his pal. He came back with a beautiful answer. He said 'Thank God my mum and dad don't have to put up with all that pain anymore'". 📱

Whether Southgate or Mancini come out on top this Sunday, we can all look back on a fantastic month of football.

It’s a tournament that was forced to reschedule due to a global pandemic and even this summer there were calls to delay it further, to give the players a rest after a taxing year. Instead, we have been rewarded with unforgettable moments played out in front of returning fans who have been absolutely spine tingling in their support.

Both Southgate and Mancini deserve all the plaudits that have come their way. They’ve been inspirational figures, turned doubters into believers, reconnected their countries with supporters, created identities, and spoken articulately and passionately on difficult topics.

They’ve both been winners in our eyes, but only one will lift the Euro 2020 trophy on Sunday night, and we await with eager anticipation to see which man will stand alone at Europe’s managerial summit.

Here at The Sack Race we are predicting a tight yet entertaining 1-1 draw at 11/2, with Southgate’s England to sneak it on penalties - yes, you read that correctly - at 10/1 in front of a jubilant home crowd.