Euro 2021 Betting: England's likeliest line-up vs Croatia according to the odds

Paddy Power have subsequently released odds on who will start the Three Lions’ first clash against Croatia on June 13, with Harry Maguire touch and go to feature from the outset due to his recent ankle complaint.

So, according to the odds, what is the most probable starting XI going to be for the greatly-anticipated curtain-raiser in 11 days time? 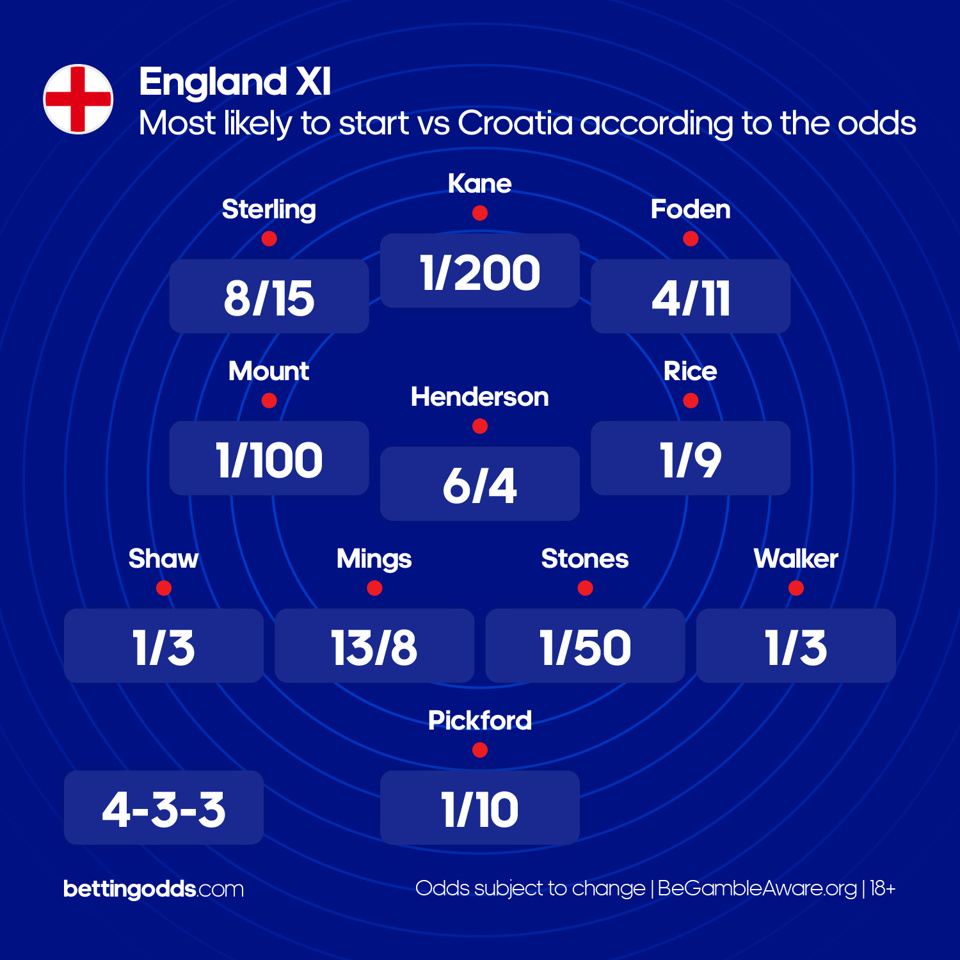 Jordan Pickford divides opinion among football fans, but one thing is certain and that is his unrivalled experience at a major tournament, having been No 1 for the 2018 World Cup in Russia.

The Everton shot-stopper is definitely the best with the ball at his feet, too, and at 1/10 it’s clear the bookies think he will line-up against Croatia. We do as well.

Southgate surprised many by calling up four right-backs to his final squad, with Kieran Trippier, Kyle Walker, Reece James and Trent Alexander-Arnold all getting the nod, taking the total number of defenders in the 26 to 10.

The England boss is expected to alter between a back-four and back-three depending on opponent at the Euros, but against a strong Croatia side and with Harry Maguire likely to miss out due to his ongoing race against fitness, it wouldn’t be too surprising to see a traditional defensive line deployed for safety reasons.

If this proves to be the case, the odds suggest that Man City’s experienced Kyle Walker will start at right-back, alongside John Stones at centre-back and Luke Shaw at left-back.

Should Maguire - currently 4/6 to start against Croatia - be deemed fit enough, he will undoubtedly partner Stones in the middle of defence but with Southgate suggesting he may miss out, it’s likely the left-footed Tyrone Mings would replace him as a left-sided CB (13/8).

If a back-three is adopted, Conor Coady (11/4) could start ahead of the Aston Villa man due to playing there more for Wolves, and in this instance the odds suggest Reece James will start at right wing-back (5/2), with Alexander-Arnold's inclusion up at 10/3 and Trippier's at 4/1. I’d fancy Mings if the chosen formation is 4-3-3, though.

Jordan Henderson’s inclusion in the squad following months of being sidelined by injury comes as welcome news. The Liverpool skipper is a huge personality to have around the changing room and will add a wealth of experience to the midfield.

If he is fit, he’ll definitely start against Croatia though if Southgate opts against risking him, it’s likely Kalvin Phillips (11/4) will come in as a straight swap to sit alongside Declan Rice in the middle of the park.

Mason Mount is a guaranteed starter a little further forward, with Jack Grealish an outside fancy at 11/2 - most likely due to being out injured for so long towards the end of the season. The aforementioned Declan Rice (1/9) will almost certainly start in the heart of midfield barring any late injuries.

Harry Kane is the most nailed on starter in the England squad, priced at 1/200 to lead the Three Lions’ attack. Meanwhile, Raheem Sterling - who endured a pretty underwhelming second half to his campaign for Man City - is expected to get the nod on the left-hand side of a front-three.

The international stalwart has always upped his game for the national team and brings plenty of experience to a dynamic forward line alongside a telepathic relationship with leading man Kane.

Sterling’s teammate Phil Foden has been phenomenal this season and simply has to start at the Euros. With Marcus Rashford’s wavering form it would be no surprise to see the United forward benched for the first game, allowing the exuberant Stockport native the perfect opportunity to shine on the main stage at his first major tournament for the senior side.

Who do you think will start England’s first match? Let us know on Twitter @BettingOddsUK!