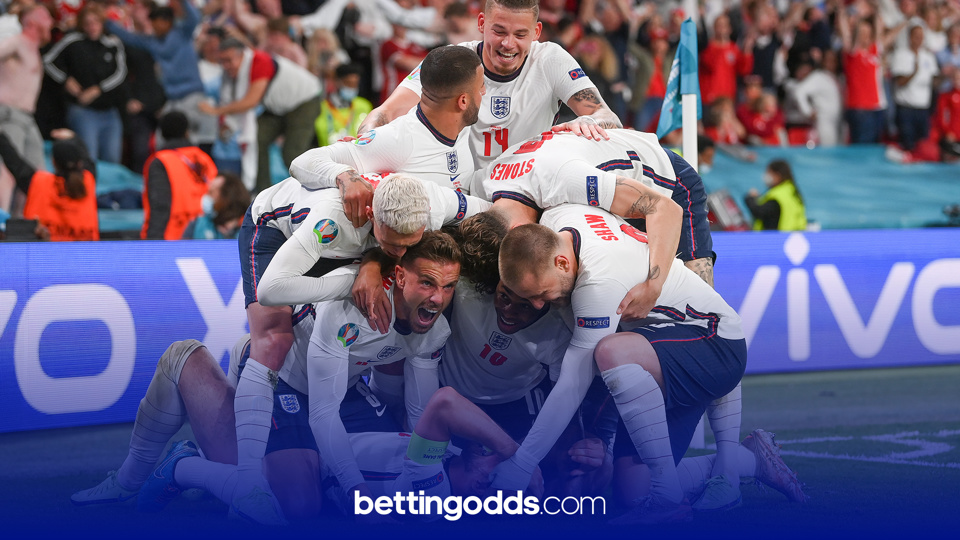 Thursday’s hangover is now a thing of the past and England fans can prepare for the monumental occasion that is a Sunday’s final against Italy. Gareth Southgate and his players have done the nation proud whatever the outcome, however bookmakers have them slight favourites to lift the trophy over Roberto Mancini’s men, priced at 4/5 to do so.

By reaching the final, England have become the 13th team to do so in European Championship history and are the first newcomers to a final since Greece and Portugal in 2004. Ahead of Sunday’s game we’ve cast our eye through the main betting markets and also provided for some key stats which will hopefully lead to some profitable punting for the game.

Let’s start by taking a look at the Match Result odds. The Three Lions have kept five clean sheets in six games so far at the tournament can be backed at a current best price of 17/10 to win the game in 90 minutes with Betfair.

The last two meetings between England and Italy, which were both friendlies, have ended in a 1-1 draw, with the most recent of those being in 2018. A stalemate after 90 minutes at Wembley on Sunday is being offered at 2/1 with the thought of dreaded extra-time and penalties enough to make any England fan nervous.

Italy have not won the Euros since their only triumph back in 1968 and they are one of three teams in history to have won the competition on home soil along with Spain (1964) and France (1984). 2/1 is the price that the majority of firms have on show for the Azzurri to win the game in 90 minutes, an implied probability of 33.3%.

Having a look at some prices from the shots on target market that are available with Betfair and Paddy Power and England striker Harry Kane, is the shortest price of any player across both sides. Kane is just 7/5 to register 2+ shots on target, however punters should be cautious as the 27-year-old has only hit this line in one of his six games at the Euros (excluding extra time).

Harry Maguire is also worth some serious consideration in both the shots and shots on target markets ahead of the game. The Manchester United captain has registered at least one shot on target in all three knockout games at the Euros and got off 36 shots in 34 games in the Premier League last term. Maguire can be backed at 12/5 to hit the target once against Italy with a repeat of his two against Denmark priced at 17/1.

Harry Kane is tied level with Gary Lineker for the most International goals scored for England at major tournaments. The pair both have ten to their name and with Kane just one behind Patrick Schick and Cristiano Ronaldo for the Golden Boot. England’s penalty taker can be backed at a current top price of 19/10 with William Hill to get on the scoresheet against Italy.

No player in the Italy squad has scored more than two goals at this summer’s Euros, Federico Chiesa is a slight doubt for the game but should he start he’s a rather attractive 5/1 to score anytime with BetVictor. With two goals in his last three appearances, including against Spain in the Semi-Final, Chiesa looks slightly overpriced after letting off an average of 3.2 shots per 90 minutes at the Euros.

Player to be carded

Harry Maguire is the only England player to have received more than one yellow card at the Euros, after one against Germany and Denmark. Maguire also landed a ‘to be carded and 1+ shot on target’ double in both of those games priced at 18/1 and 11/1.

Italy also have a fairly respectful disciplinary record at the tournament picking up just seven yellows across six matches. Those seven yellows have all gone to different players but when looking at the fouls data from the previous six games, it’s Giovanni Di Lorenzo who tops the charts with an average of 2.2 fouls per game. The 27-year-old right-back is being offered at 7/2 with several firms to pick up a card in the Final.

Luke Shaw has made more assists than any other player so far for England after two against Ukraine and another against Germany. Manchester United has put in some excellent performances down the left and needs one more to tie level with Steven Zuber of Switzerland who currently has the most at the tournament with four.

Ciro Immobile, Marco Verratti and Nicolo Barella all have two assists so far for the Italians with Immobile both priced at 9/. PSG’s Marco Verratti has accumulated the most xA (expected assists) at the tournament and can be backed at the slightly short price of 13/2.

Fans will have the choice of either ITV or BBC to watch the game on Sunday with it being shown live on both with kick off 8pm. Enjoy the game, let’s hope Gareth and the lads can bring it home. Please always gamble responsibly.