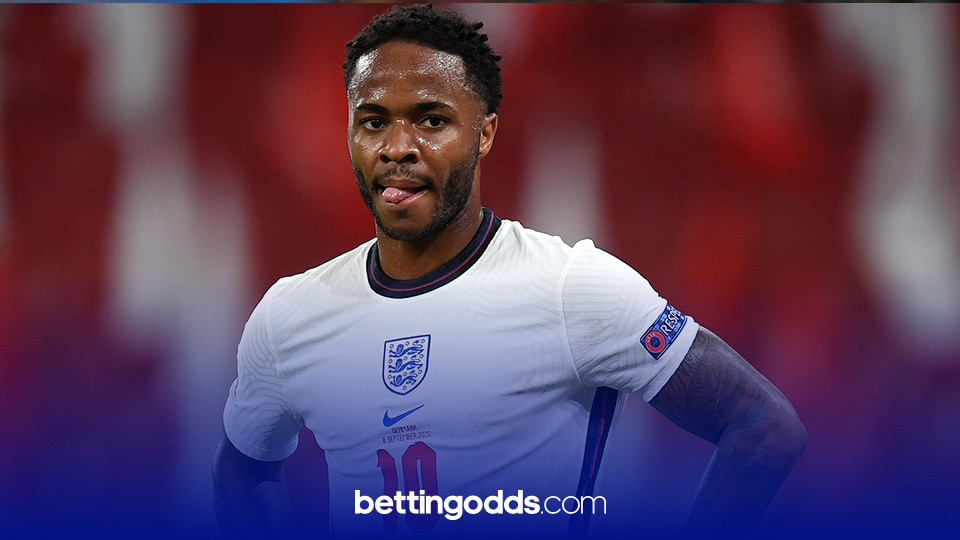 England v Germany Betting: Raheem Sterling scored in both of England's wins in the group stage and features in our 20/1 double
By Anthony Eadson
17:00 Monday 28th June 2021 - 4 minute read

England take on Germany in their 300th International match at Wembley on Tuesday evening. The Euro 2021 Round of 16 clash looks one to savour with the winner potentially having a rather generous route to the final which would see them play Ukraine or Sweden in the quarters, before a semi-final game with either Denmark or the Czech Republic.

The Three Lions have never lost a game in a Euros or World Cup in which they have played at Wembley, winning nine and earning a draw in five of those. The last time these old enemies clashed horns was back in 2017 in an unmemorable Friendly that ended 0-0.

Here at BettingOdds.com we’ve had a look through the odds for the game and have picked out a selection we like the look of.

Some England fans had questions over whether or not Raheem Sterling should be in the starting XI for the Euros, but the Manchester City man has proved his doubters wrong, scoring his sides only two goals in a mediocre group campaign.

Over the last 18 months Sterling’s goal scoring for his country has improved drastically. In his last 19 matches for England the 26-year-old has scored 14 goals, after scoring just twice in his first 45 appearances for the national team. Furthermore, Sterling’s goals have all come in competitive matches as opposed to friendlies which bodes well for their knockout game with Germany.

It’s the shots on target market where we are backing Sterling against Germany on Tuesday, and after hitting the target twice in his most recent game against the Czech Republic we fancy a repeat. Sterling has registered at least one shot on target in five of his last seven starts for club and country, hitting 2+ in two of those. With him looking England’s biggest threat at the tournament so far, we are happy to include him for two shots on target.

Kai Havertz is a player who grew in confidence throughout last season and looked much more settled under the guidance of Thomas Tuchel at Chelsea. At this summer’s Euros, Havertz has scored two goals, with no other player having scored more for Germany. The forward’s accumulative xG figure stands at 2.2 for the tournament with the next highest player in the squad being Robin Gosens with 0.6xG.

Besides topping the goals and xG rankings for Germany at the tournament, no other player for Joachim Low’s side has registered more shots on target at Euro 2021 than Kai Havertz. The 22-year-old hit 2+ shots on target in his group games against both Portugal and Hungary and we’re leaning towards him hitting that line again tomorrow at a generous looking price with Betfair.

Combining both Raheem Sterling and Kai Havertz to have 2+ shots on target in the game currently pays 20/1 with Betfair and just slightly less with Paddy Power. We think this is a decent price considering the same bet pays just 9/1 with Sky Bet. A considerable difference for two players who have arguably been the most prominent attacking threats for their countries at this tournament.

Both players hit two shots on target in their most recent games at the tournament and with what’s at stake on Tuesday we fancy a big game from both of these young men.

Best of luck to those following any of our selections for the game which can be seen live on BBC1 at 5pm. As always, please gamble responsibly.