The 150th Open Championship takes place at the home of golf this week as the British Isles basks in its annual one week heatwave. It looks set to be a scorcher up in Scotland and ahead of the tournament we’ve taken a look back to when Rory Mcllroy’s dad landed himself a six figure bet back in 2014. 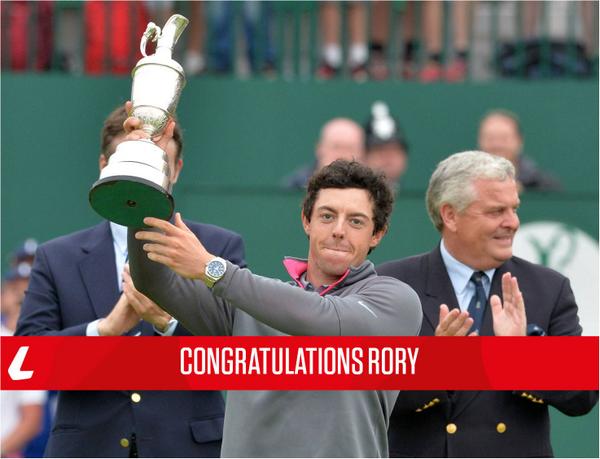 CONGRATULATIONS RORY: We're paying out 180k to Rory's Dad and pals. There'll be some party at the McIlroy's tonight! http://t.co/wOG7vvIygd

Many parents dream of their children becoming successful athletes and winning personal accolades, but not quite as many had as much faith in their child as Rory Mcllroy’s father Gerry.

Back in 2005 Mr Gerry McIlroy, was a bar steward in Belfast and placed a £200 bet on his 15-year-old son Rory, to win The Open Championship before the time he turned 26. Ladbrokes had offered odds of 500/1 on his son to lift the Claret Jug in the next 11 years, but it wasn’t just Gerry who had taken a punt on young Rory as in fact his friends had placed similar bets at 250/1 and 150/1 which would go on to cost the bookmaker a further £80,000.

On that famous Sunday at the Royal Liverpool Golf Club, Rory went on to win the tournament by two shots, beating Ricky Fowler and Sergio Garcia in second and third. When interviewed that evening and asked about the bet that his dad had placed a decade ago, Rory stated

“I don’t think it matters to him that much any more, but the mates he did it with, I think they’re a little happier”.

It wasn’t the first time that a famous parent had taken Ladbrokes to the cleaners either, with Lewis Hamilton’s dad Richard Hopkins placing a series of bets on his son both to become a World Champion (500/1) and to win an F1 race by the age of 23 (200/1).

Rory McIlroy has not won a major since back in 2014, but this time round he arrives at St Andrews in good form having finished 2nd at the Masters as well as defending his title at the Canadian Open, where he beat Tony Finau by two shots. McIlroy is the favourite to lift the Claret Jug on Sunday and can be backed at around 10/1 with most firms. You can also read a full betting preview for the tournament from our in-form golf expert Jamie Worsley.

The Open Betting Tips: Scheffler is the man to beat at St. Andrews

Just three months following Scottie Scheffler’s success at Augusta, we arrive at St Andrews for The Open Championship, our final major of the year and are faced with the sad prospect of another nine months before we see these…