On Monday Betfair reported a punter had place a £1m bet on Joe Biden to become the next President at odds of 1/2
By Anthony Eadson
14:02 Tuesday 3rd November 2020 - 5 minute read

The day has come, the 2020 US Election is finally upon us and @AnthonyEadson is here to give us the latest odds and insight into what has been one of the most interesting betting events in history.

I woke up this morning to see a video of Donald Trump dancing to the YMCA, telling his fans to go out and vote for him on his very own Twitter channel. It’s certainly not how many people envisioned US Politics would be translated to the masses in 2020 but in just a few hours time we should be closer to knowing whether or not Donald Trump will win a second term in the White House

Will history repeat itself? Can Donald upset the odds once again? These are the questions on the minds of many punters on Tuesday and with odds of 6/4 to be the Next President, Trump is certainly the outsider just as he was four years ago. Odds of 6/4 imply a 40% chance that we will be seeing Trump in for a second term. Four of the last five Presidents of the United States have gained a second term and if he was to fail, Trump would be the first since George Bush Senior to do so.

Joe Biden has been the favourite with bookmakers since August 1st when the two prices both traded at 2.0 (1/1) on the Betfair Exchange. Since then we have seen a significant swing in the betting markets with Biden’s price continuing to shorten all the way into 4/7. That’s a 64% implied probability of victory for the former vice president.

Up until around just a week ago the record for the highest total amount placed on a market with the Betfair Exchange in history was £199m which had been placed on the ‘Next US President’ market back in 2016 for Clinton v Trump.

The record has now been completely blown out the water with a staggering £320m having been placed on the event on the Betfair Exchange. Forecasters are now predicting that figure could rise to an eye watering £450m before the close of play on tuesday.

Punters from across the globe are also weighing in with their wagers for the event and yesterday Betfair reported that someone had placed a £1m wager on Joe Biden to be the next President at odds of 1/2 (1.5).

This in fact is the biggest ever Political Bet placed in history with the punter in question set to bag theirselves a cool £500k profit with a combined return of £1.5m if the former vice-president is to defeat Donald and become the 46th President of the United States.

How does this compare to other betting events?

So with the news that The 2020 Next President Market has become the most bet on event in the history of the Betfair Exchange, let’s have a look at how this compares to other key sporting and political events in the past.

2016 very much rewrote the script for Political Betting for certain punters as there were huge shocks in both Trump winning the US election and Britain voting to leave the EU in the referendum. The latter had over £113m placed on the event which is still enormous when you compare to the events below.

Political Betting is clearly a growing area and you only have to see from these figures how they can dwarf some of the biggest events on the planet. The figures below show the amounts placed with the Betfair Exchange. 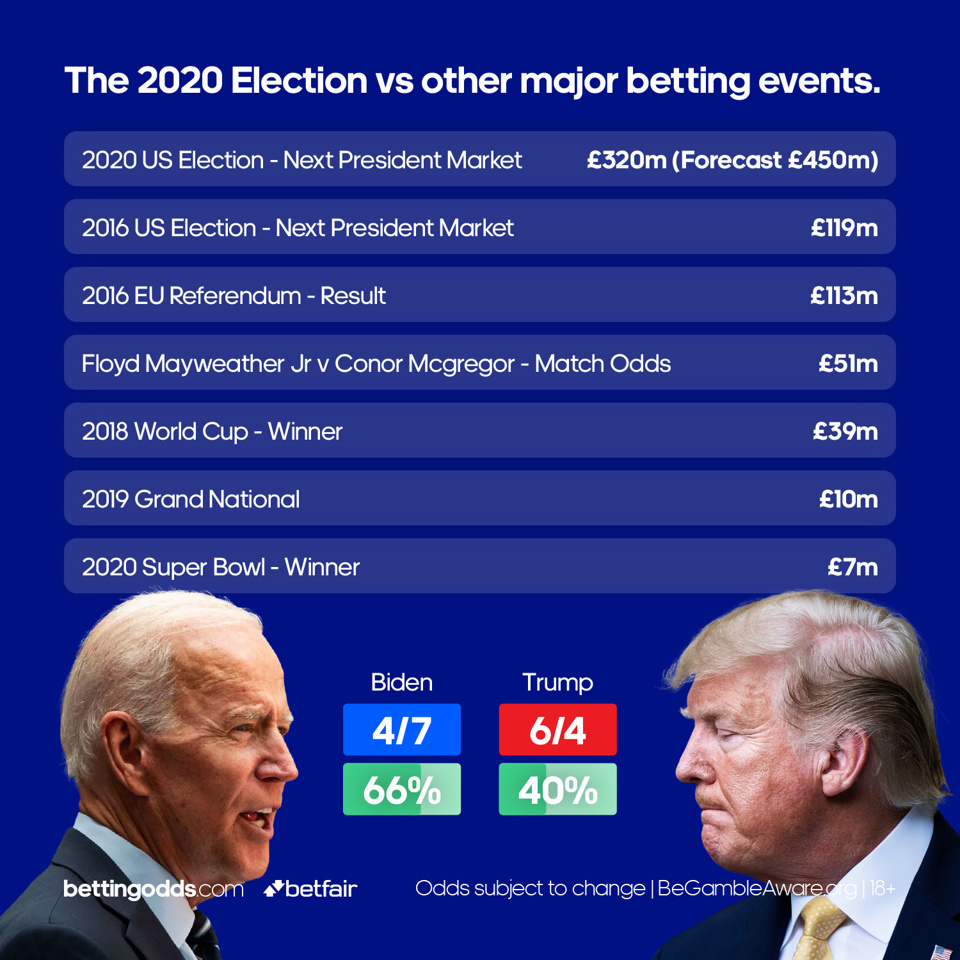 How and when will my bet be settled?

According to Betfair and their market rules around how the Next President market will be settled, there are three different scenarios.

Out of the three possible scenarios this is the least likely. Joe Biden would need to secure a sizeable win in Florida with other key states having to report their results faster than anticipated.

2) Settled on Wednesday or Thursday

A lot more likely than the first scenario as the logistics behind the election can often take time. There has already been a large increase in the amount of postal voters which will take longer to count than the previous elections. This may cause betting markets to stay open throughout this counting period.

A contested result could happen if we see a margin of less than 1% in some of the key swing states. Again Florida, Michigan and Pennsylvania could all be key here and this could also potentially lead to a recount.
If there is a contested result, it will most likely lead to a legal battle regarding recount and for the Supreme Court to potentially decide the winner.

It may be worth checking with your bookmaker around which market rules apply here and how your bet will be settled, but one thing is for sure, if Donald does get beat, he will not go quietly.

In my opinion, yes there have been big Political betting upsets in 2016 but i don’t see history repeating itself here. We cannot simply base the narrative of this election on the happenings of 2016 and I do think the polls and the betting markets have this one right and that Joe Biden will become the next President.

It could be a long battle in the Supreme Court with Donald dragging his feet but whatever happens it sure has rewritten the history books in terms of Political Betting.

Next Prime Minister Odds as BettingOdds.com provide a Betting Market update following the first televised in the…

Next Prime Minister Odds as BettingOdds.com provide a Betting Market update following the latext round of voting…

Next Prime Minister Odds as BettingOdds.com take a look at the contenders to replace Boris Johnson and the updated…

Next Prime Minister Odds as BettingOdds.com take a look at the contenders to replace Boris Johnson now he has…