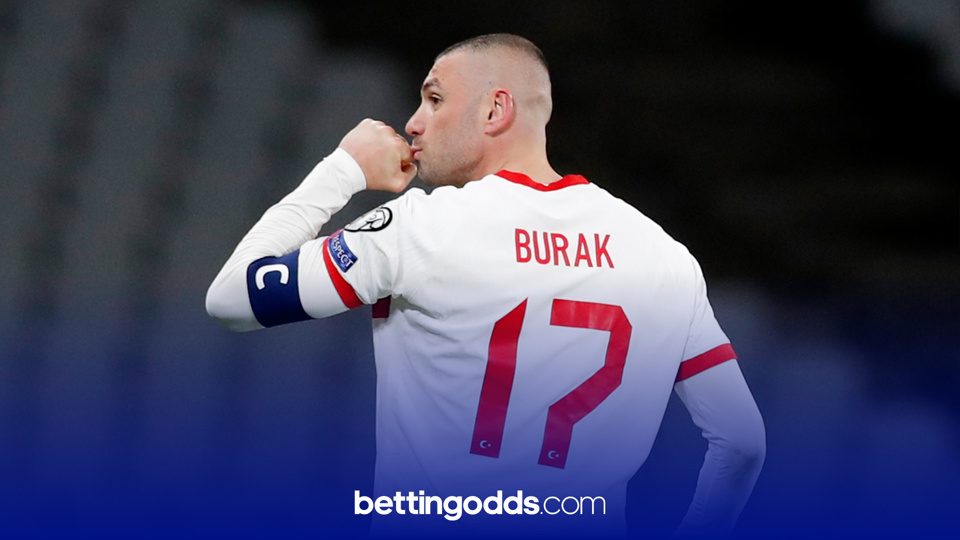 Anticipation for Euro 2021 is close to reaching an all-time high as the tournament kicks off in seven days time. The opening fixture sees Turkey face Italy on Friday 11th June at 20:00 inside the 70,000 seated Stadio Olimpico - home to both Lazio and Roma in Italy’s capital.

There is just a single injury concern among both teams as things stand, with key figure Marco Verratti a surprise inclusion in Roberto Mancini’s 26-man squad. The robust midfielder missed the latter stages of the season with knee ligament damage, and while it is currently unknown as to when the PSG man will be deemed fit enough to feature, he is expected to miss Italy’s first match. 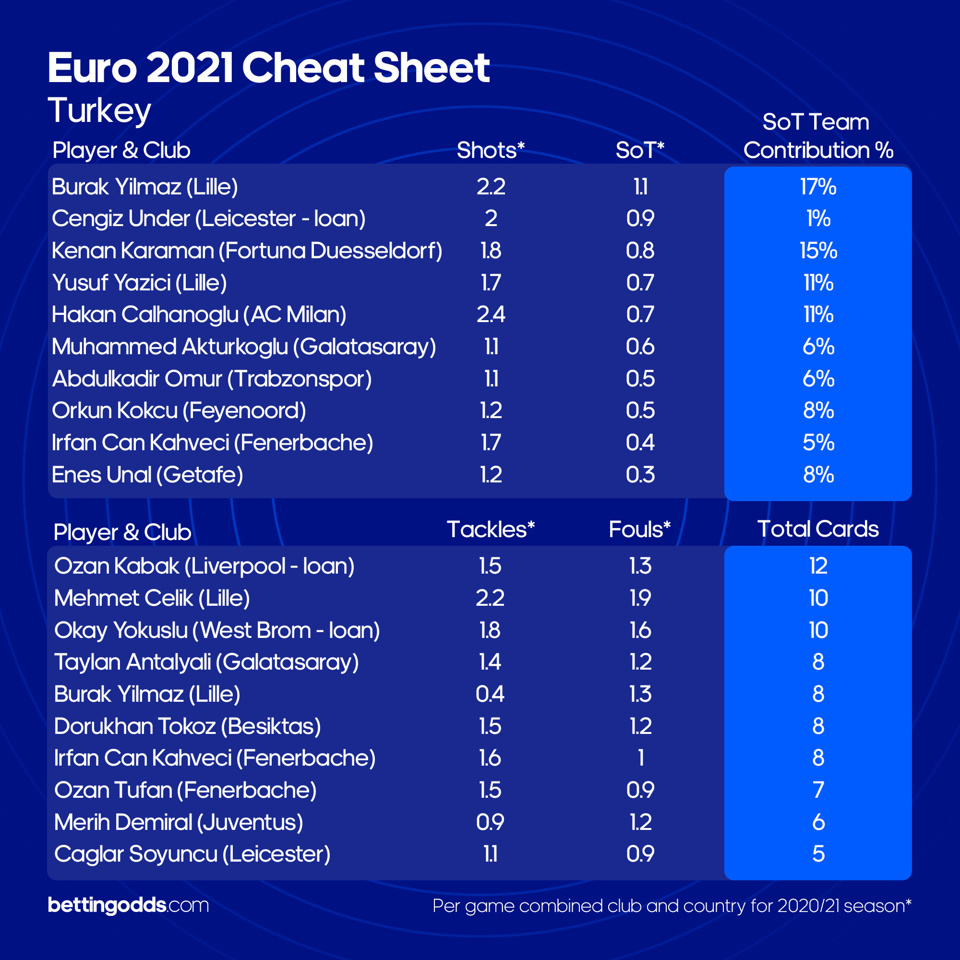 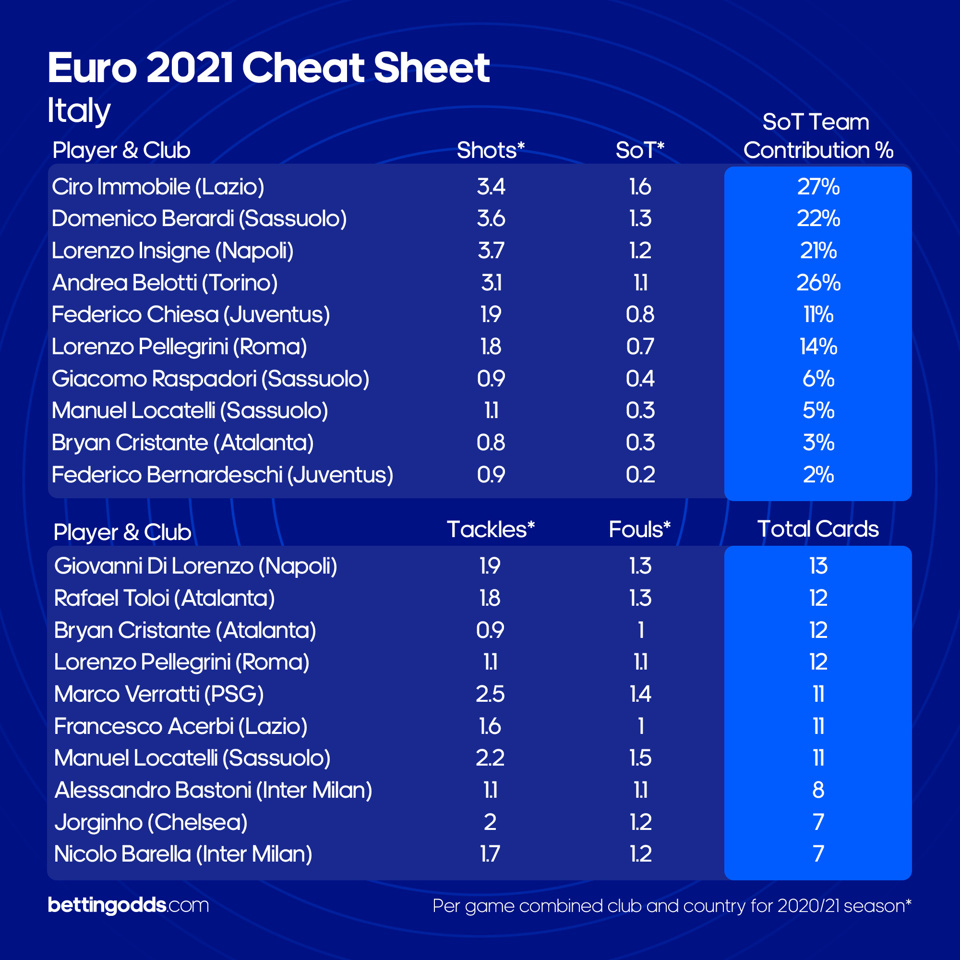 An immediate attention grabber is Ciro Immobile's impressive 1.6 shots on target per game stat. He's quite the distance ahead of both his teammates and their Turkish rivals, with Domenico Berardi the next closest, clocking in at a 1.3 average.

The 31-year-old Lazio forward enjoyed a strong campaign, netting 28 times from 48 appearances for club and country. And as you can see from the graphic above, the Italian striker contributed 27% of his side's total shots on target in the league this season.

However, in Verratti’s absence, there's a real opportunity for Turkey to hurt Italy on the counter attack. And if there's anybody equipped to do so, it's their captain: Burak Yilmaz.

The 35-year-old is very much the focal point in this side, with the skipper also on penalty duty for his nation. Yilmaz boasts relatively strong stats himself, averaging 2.2 shots per game, with 1.1 of those hitting the target.

After a solid 16 goals return and finishing as the fourth highest scorer in Ligue 1 during Lille’s title-winning campaign, Yilmaz could enjoy getting at an Italy side who have chopped and changed their lineup frequently over the course of the past eight months.

On this subject, there is a suggestion of more value on the Turkish side for shots and shots on target. Yilmaz’s Lille teammate Yusuf Yazici has produced an attacking return every 2.21 games this season, as they squeezed out PSG to win the French top flight division for the first time in a decade.

In terms of numbers, the attacking midfielder is a little further down the table with his shots on target average of 0.7, but if you compare him with his international teammate, Hakan Calhanoglu, the pair like to get shots off from deep, as can be seen by the midfielder's team high of 2.4 shots per game.

If Turkey are to get anything from this game, he and Yilmaz will be critical to their success. And as teammates for both club and country, you can imagine their understanding of one another’s strengths could be a deciding factor in the outcome of the game.

As for cards, there are a number of strong contenders worth taking a look at. One Italian has entered the book more times than any other available player, and that's Giovanni Di Lorenzo who leads the pack with a staggering 13 yellow cards from 54 appearances for Napoli and Turkey this season.

Rafael Toloi is the first of three Italians to collect 12 total cards over the course of the campaign, receiving 11 yellows and a single red card in a Coppa Italia match for Atalanta. The other two are Bryan Cristante and Lorenzo Pellegrini who have both featured in a midfield three and a midfield five for their country under Mancini. Notably, the pair also collected a booking while on international duty, with the former’s caution coming within a 9 minute substitute appearance during a UEFA Nations League match.

On this front for Turkey, maybe the most obvious perpetrator tops the leaderboard, and that is Ozan Kabak. The Liverpool loanee collected 11 yellows and one red for Liverpool, Schalke and his home nation in the 2020/21 season. But despite this, he finds himself behind two of his own players for a higher number of fouls per game: Lille's Mehmet Celik and fellow Premier League loanee Okay Yokuslu.

You'd expect Turkey would have to keep a clean sheet to win this match, in which case, a number of tactical fouls higher up the pitch, as well as set-pieces deep into their own half is a likely scenario. If this is how the game plays out, these three will no doubt be responsible for causing a great number of them, and could find themselves booked as a result.