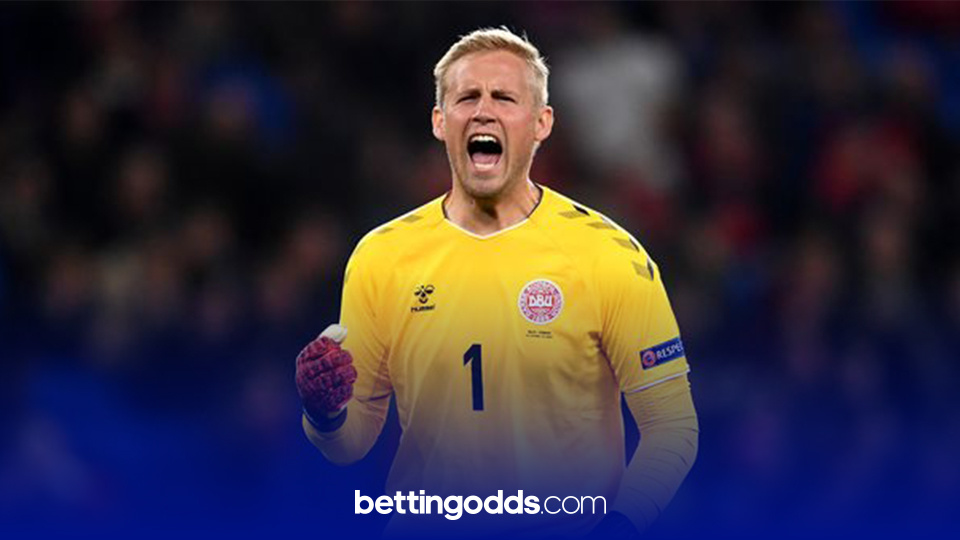 Russia take on Denmark in the final round of Group B fixtures on Monday evening. The game will be played in Copenhagen and we’ve got all the data you need for your betting needs with our Cheat Sheet below.

This will be a must win game for the Danes after defeat in both their fixtures against Belgium and Finland. There is still the possibility of qualification for Denmark due to the nature of four third-placed finishers qualifying for the round of 16, with Finland and Russia both currently having three points and Belgium, six.

Russia grinded out a priceless 1-0 victory against Finland on Matchday two thanks to a solitary goal from Aleksey Miranchuk. If Russia manage to better Finland’s result against Belgium, they could finish second in the group which would see them face the runner up from Group A, which could well be Wales. 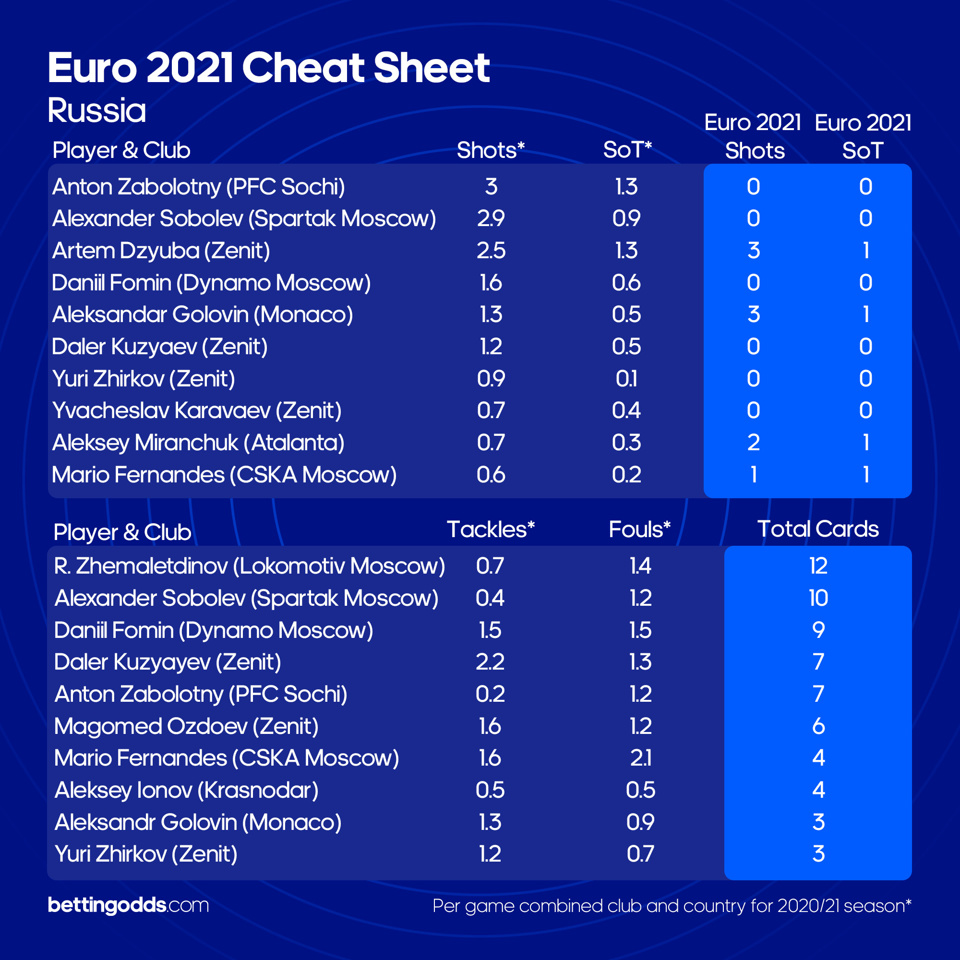 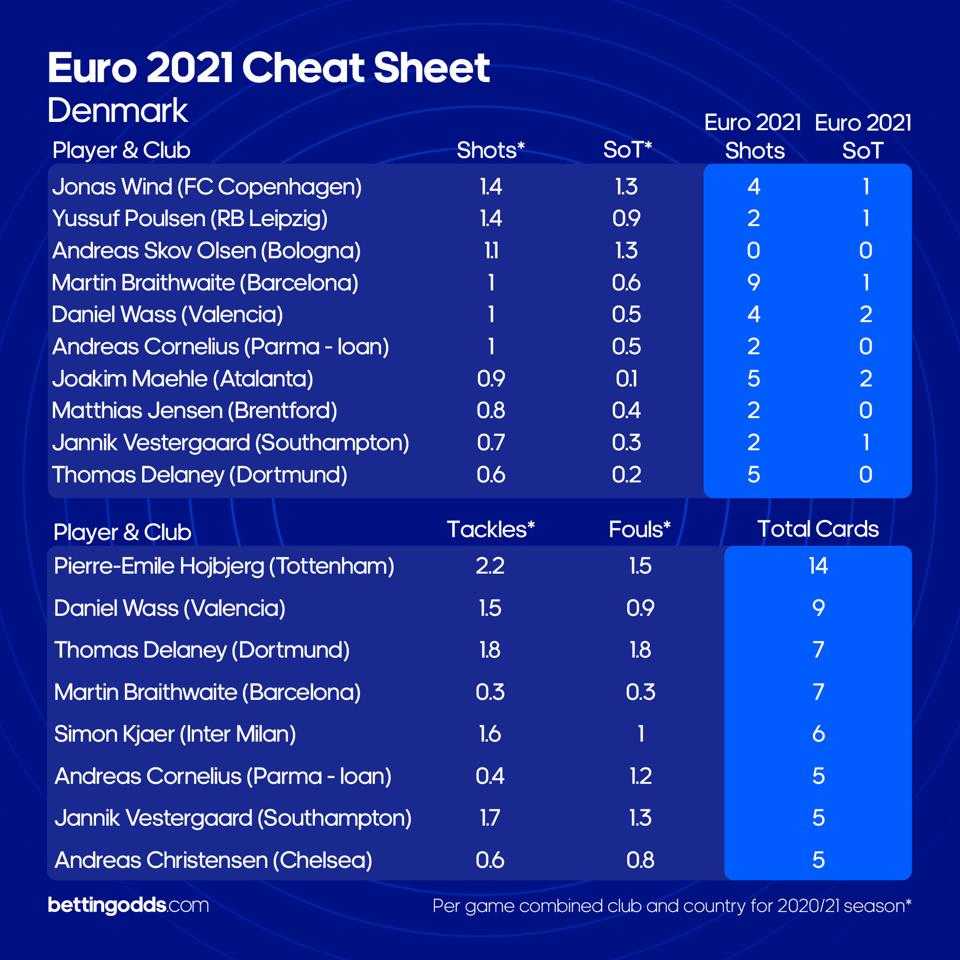 Kevin De Bruyne massively changed the game for Belgium after coming on at half-time against Denmark with his side 1-0 down. A goal and assist from last season’s PFA player of the year was enough to put Denmark to the sword, although Kasper Hjulmand’s side did start the game with an incredible energy and tempo, which we expect to see again in the first half against Russia.

One player we really like the look of in the shots markets against Russia is left-wing-back Joakim Mahele who registered three shots against Belgium after hitting two in his opening fixture against Finland. Mahele was priced at 8/1 with Paddy Power to have 2+ shots against Belgium which landed with relative ease, and we’d be recommending anything north of 4/1 for 2+ shots for the final group fixture, with this selection landing in both Denmark games so far.

With Denmark needing to get the three points we fully expect them to take the game to Russia and another player to keep an eye on in the shots markets is Barcelona’s Martin Braithwaite. The ex-Middlesbrough man let fly an impressive seven times against Belgium on Thursday, taking his tally to nine for the tournament. Only one of those seven shots tested goalkeeper Thibaut Courtois and we’d tread carefully if choosing to follow Braithwaite in the shots on target market.

One player who we like the look of to pick up a card on Monday evening is Russia’s Roman Zobnin. The Spartak Moscow midfielder has featured in both group games so far and has registered two fouls in each of those. None of those fouls were punished with cards and with him picking up seven yellows and one red in 28 league appearances in Russia last season I think he’s primed for one against Denmark. If Russia avoid defeat they will give themselves every chance of qualifying and with that in mind we think they will be making plenty of fouls to break up play and keep out the Danes. Any quotes of 4/1 or higher will make appeal for Zobnin to be carded.

get offer get offer
#AD Bet £10 & Get £50 in Free Bets for new customers at bet365. Min deposit requirement. Free Bets are paid as Bet Credits and are available for use upon settlement of bets to value of qualifying deposit. Min odds, bet and payment method exclusions apply. Returns exclude Bet Credits stake. Time limits and T&Cs apply.
Free Betting Offers