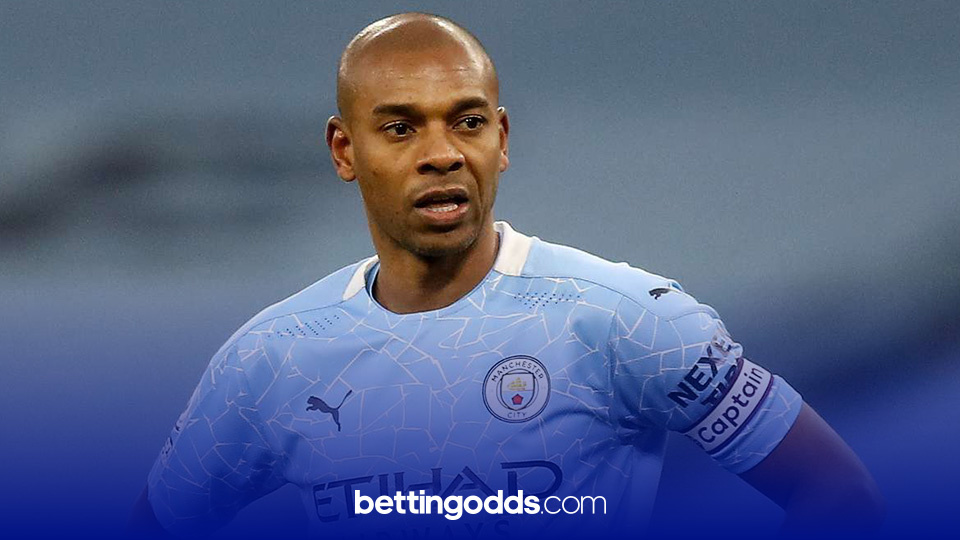 Manchester City v Chelsea Tips: Fernandinho his picked up 149 yellow cards in his club career and features in our Bet Builder double for the game
By Anthony Eadson
16:45 Friday 28th May 2021 - 3 minute read

Manchester City have the chance to get their hands on their first Champions League trophy as they take on Chelsea in the final that kicks off at 8:00pm in Porto on Saturday evening. There’s plenty of good offers knocking around from the bookmakers which you can read more about here, including a free £5 bet builder from Paddy Power for new and existing customers.

With this in mind we’ve taken a look into the data behind the players involved and have picked out a bet builder that we like the look of that pays just under 13/1 with Paddy Power.

The shots markets have continued to grow in popularity this term and the first half of our double comes from here as we’re taking the 16/5 for Kevin De Bruyne to have 2+ shots on target in the match.

Due to missing some of the season through injury, De Bruyne has only started 23 games in the league. He’s still managed to score six goals in that period and provide an impressive 12 assists. The thing that really stands out this term though is how much more the Belgian is shooting more than any other of his team mates.

With 3.2 shots per game on average, the 29-year-old has the best shots per game ratio of any player at City this season. The next highest at the club in the league this season is Raheem Sterling with 2.3pg, with only Bruno Fernandes, Mohamed Salah and Harry Kane ranking better than De Bruyne in the entire division.

Only Arsenal has Kevin De Bruyne scored more goals against than Chelsea in his career, who he bagged against on four occasions. We’re expecting a big performance from City on Saturday and expecting De Bruyne to be on both penalties and free-kicks for Pep Guardiola’s side.

All set for the 150th yellow card of his club career

Despite only starting 12 Premier League games this season, no player has picked up more yellow cards in the league for City than Fernandinho, who has six along with Rodri. What’s more, when we look at the other formats the Brazilian has played in this season he has a further six yellows! Picking up two in the League Cup, two in the FA Cup and two in the Champions League.

Game script is important here and there’s no denying just how big this game is to both teams. 17/10 is incredibly short for a booking, but we feel that Fernandinho will be putting everything on the line for his team tomorrow in search of that elusive Champions League trophy.

Fernandinho averages 2 fouls a game in the Champions League this term and the referee for the game will be Antonio Lahoz, who has refereed five games in this competition this campaign, dishing out five in each on average. That’s a healthy ratio and we’ll be hoping that he can show Fernandinho his 150th yellow card of his club career.

The double currently pays between 12/1 and 13/1 with Paddy Power. Best of luck to those following and thanks for taking the time to read our views here on BettingOdds.com this season, we’ll be back with more tips for the upcoming European Championships.