As part of BettingOdds.com’s series of Cheat Sheets for Euro 2021, next on the agenda is a deep delve into the biggest offenders where tackles, fouls and cards are concerned.

Below, you’ll find the highest ranked players participating at the tournament for the aforementioned categories, ranked by their average fouls per game at club level during the recent 2020/21 season. 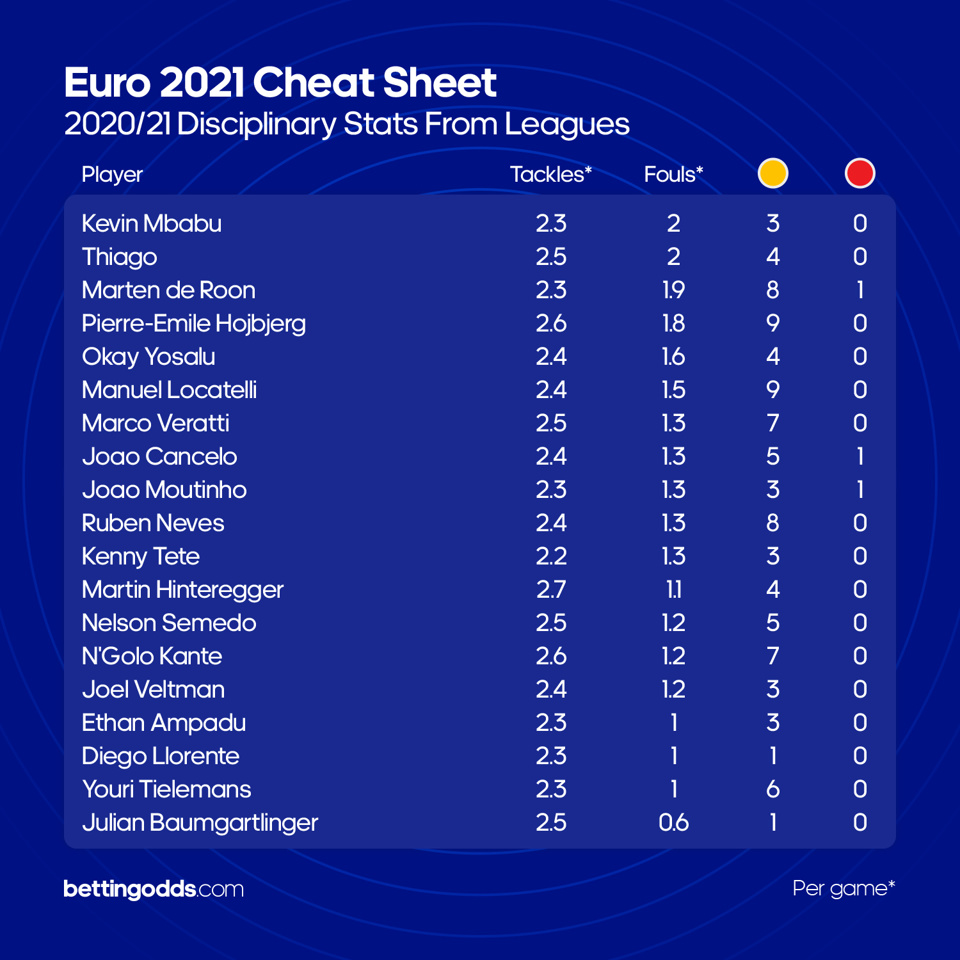 Most fouls per game

In terms of how many fouls players committed per game in 2020/21, Switzerland's Kevin Mbabu's and Spain's Thiago both had an average of exactly 2, which sees them top the chart, while Netherlands midfielder Marten de Roon follows closely behind with an average of 1.9 per game.

Interestingly, Austria’s Julian Baumgartner had the best tackle-to-foul conversion rate, with just 0.6 of his 2.5 tackles p.g resulting in a free-kick being awarded to the opposition.

Most tackles per game

As we can see from the findings above, Frankfurt defender Martin Hinteregger is the highest ranked player for tackles per game with 2.7. The Austrian commander has evidently been quite cute with those tackles, however, with just 1.1 of those converting to fouls each game and 4 yellow cards yielded from 29 starts.

A familiar name follows up in the shape of Chelsea’s N’Golo Kante. It’s no secret just how important the Frenchman is for both club and country, tirelessly breaking up play in the middle of the park, so it’s unsurprising to see him rank near the top of the pile for tackles per game with 2.6. Like Hinteregger, Kante’s tackles have only amounted to a small fraction of fouls per game with 1.2, proving just what a strong tackler he is.

Elsewhere, the likes of Pierre-Emile Hojbjerg (2.6), Nelson Semedo (2.5), Thiago (2.5) and Joao Cancleo (2.4) also ranked highly for the most tackles per game in the Premier League last season.

The joint-biggest offender in the cards department was Italy’s Manuel Locatelli, who picked up 9 yellows in 34 appearances for Sassuolo. The tenacious midfielder averaged 1.5 fouls per game in 20/21 (2.4 tackles overall) so is certainly a player to keep an eye on for your card bets at Euro 2021.

Alongside Locatelli, Hojbjerg’s name is again present at the top of the chart for yellow cards amassed throughout last season (9). All evidence supports the theory that the Danish general should be a player to get behind in the cards market this summer; hopefully he doesn’t disappoint us.