Euro 2021 Betting: Where can you bet on a player to start for England vs. Croatia?

Sky Bet have released odds on which players will start England’s first match against Croatia at Euro 2021.

The recent qualifiers have presented Gareth Southgate with plenty to ponder ahead of the summer’s Championships, with a number of players impressing for the national team, so much so that it is almost impossible to predict who the England coach will choose as his starting eleven for the curtain raiser against Croatia on 13 June.

While there are a handful of players who are guaranteed to start and play a key role for the Three Lions throughout the tournament - the likes of John Stones, Harry Maguire, Jordan Henderson (if fit), Harry Kane and Raheem Sterling - the rest of the positions are to be contested between a number of the country’s most talented footballers.

A lot will depend on the formation chosen by Southgate as some players fit certain systems better than others, and we have factored that into our consideration when assessing four different potential line-ups for England at Euro 2021.

Below, you will find a starting XI selected based on the shortest-priced selections in both a 4-3-3 and 3-4-3 formation, alongside two ‘value’ potential XI’s - one in a 4-3-3 and one in a 3-5-2 - containing players with longer odds in the ‘To Start vs. Croatia’ market with Sky Bet. 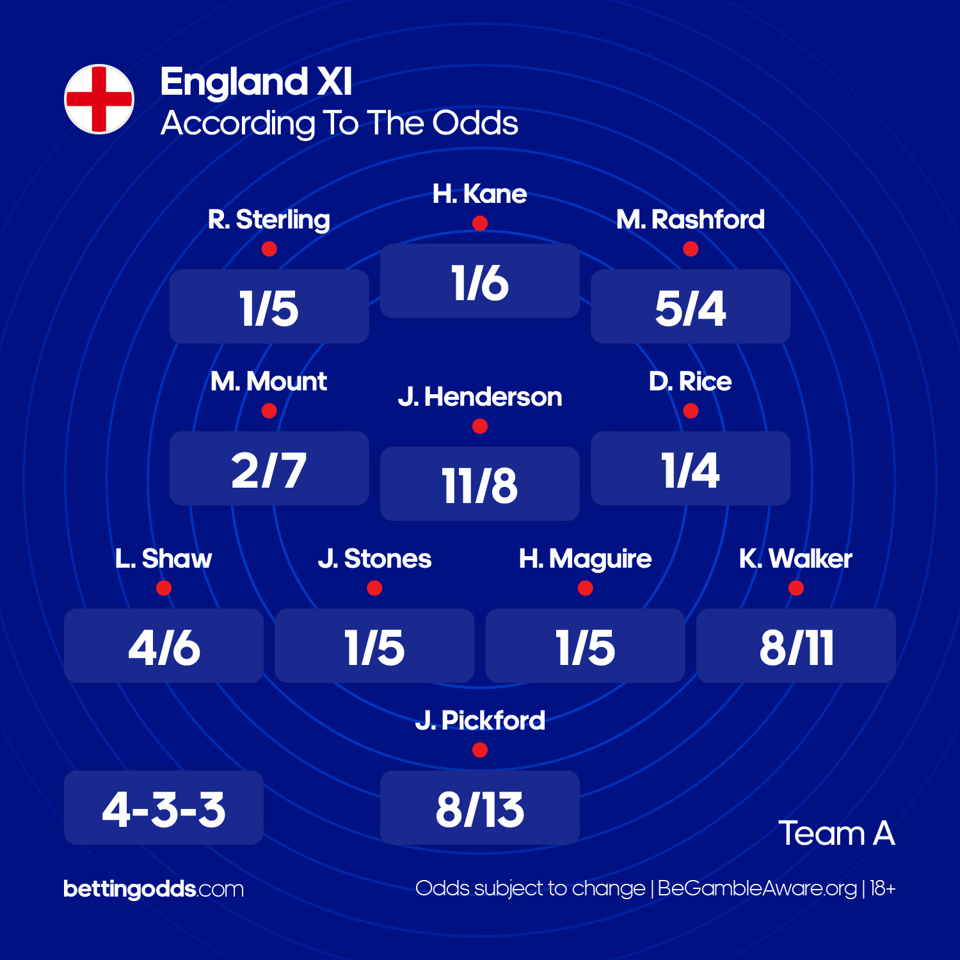 The first line-up is the most likely based on the odds. Gareth Southgate often flips between a 4-3-3 and 3-4-3 formation, but with Croatia the biggest threat to the Three Lions in Group D it is likely that a more cautious approach will be adopted, with a flat four at the back and two ‘holders’ deployed in midfield.

If this is the case, I expect to see Kyle Walker and Luke Shaw - England’s best defensive full-backs - start alongside the trusty centre-back pairing of John Stones and Harry Maguire. Rice and Henderson (if fit) will likely be the linchpins in a midfield-three, with Mason Mount in the creative No 10 role just behind a front-three consisting of Marcus Rashford on the right, Raheem Sterling on the left and Harry Kane through the middle. 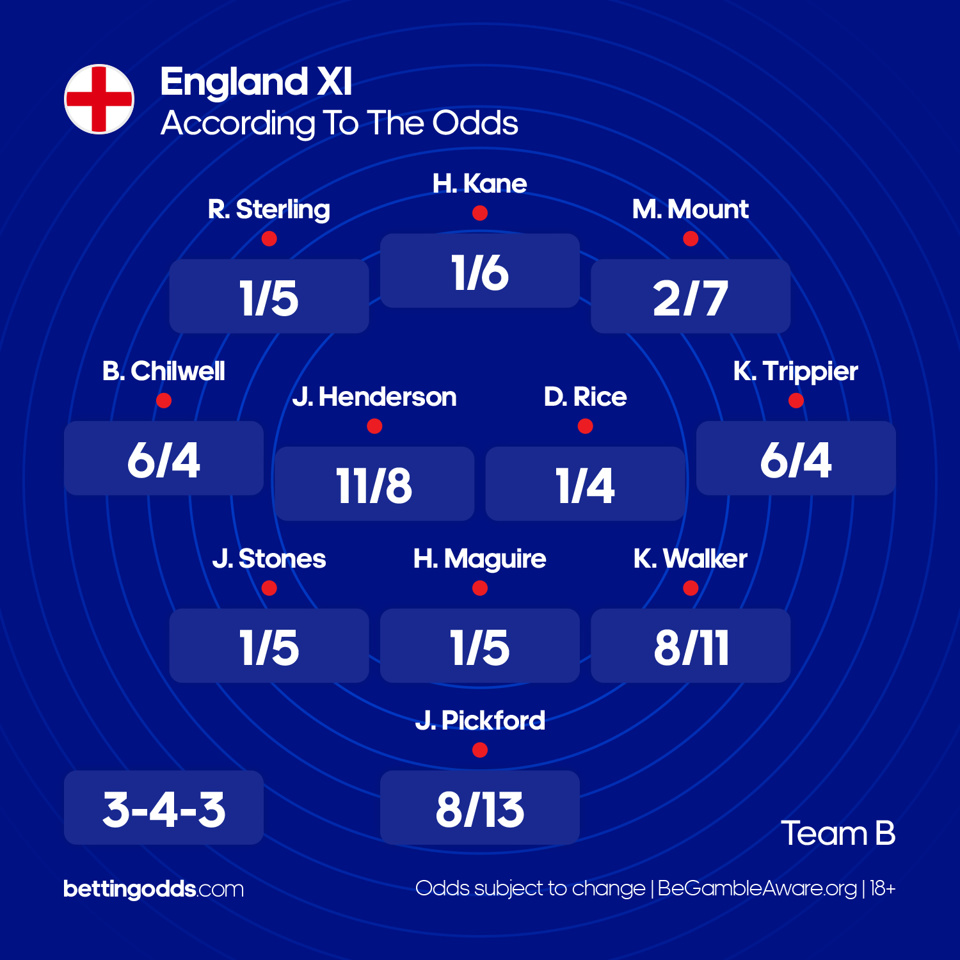 The second option available is a 3-4-3 formation, which quickly turns into a 5-3-2 when the team is defending. This line-up is similar to the 4-3-3 option but would see Walker and Shaw replaced by Kieran Trippier and Ben Chilwell, who arguably offer a little more going forward than the aforementioned pairing, although a strong argument can be built in Shaw’s case. Walker will remain in the side but as a right-sided centre-half as opposed to a wing-back, just like he did at the 2018 World Cup.

This is a slightly more adventurous system which would feature more attacking intent from the full-backs. Trippier’s crossing ability could be the difference in this formation and provide Kane with more to feed off in the box. The same can be said for Trent Alexander-Arnold should the Liverpool man be recalled to the fold for the tournament.

Mason Mount would play in a more advanced role in this system, alongside Kane and Sterling in the front-three, while Rice and Henderson remain in the centre of midfield. 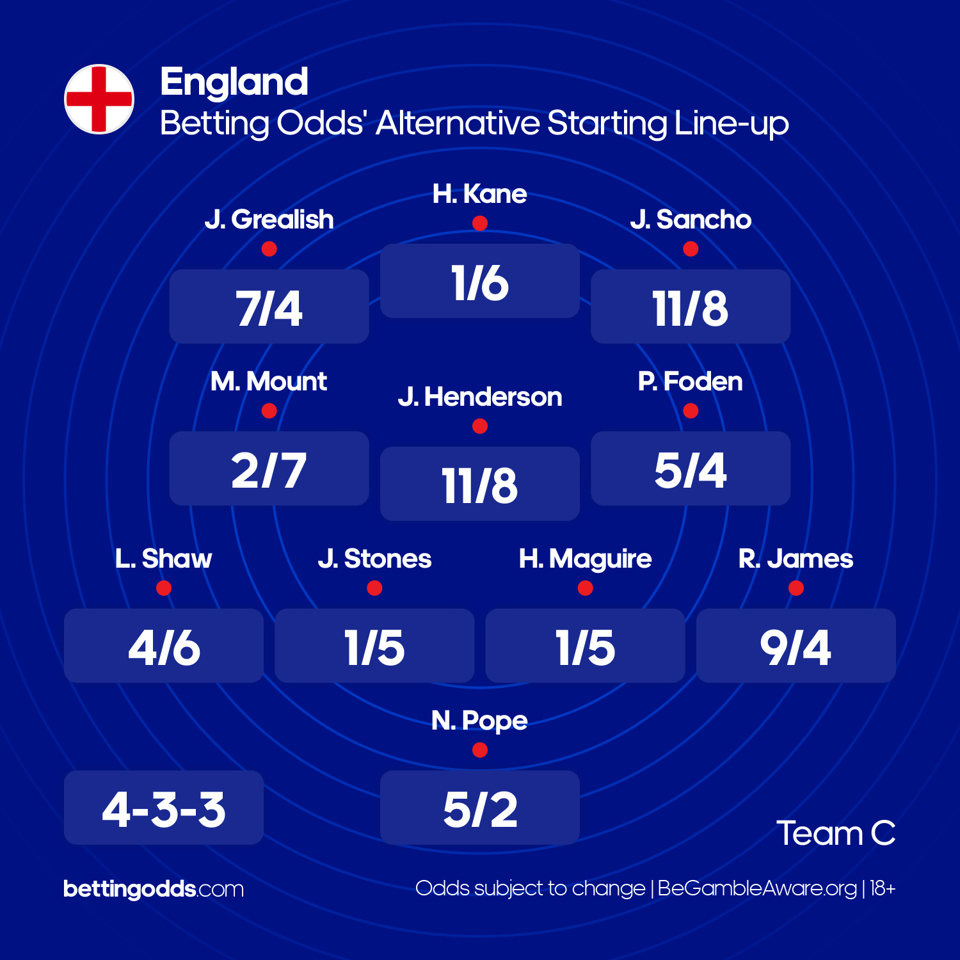 This is where we can start to get a little creative, and where the more valuable selections start to be introduced. It is unlikely that Southgate will divert from his tried and trusted methods for the first game at the European Championships, but if he fancies spicing things up a little then this line-up is certainly one which excites us.

The notable absentee here is Raheem Sterling, but the Man City winger is in all of the other teams so I thought it was time he gave someone else a chance - he can always be introduced in the latter stages to wreak havoc against exhausted, helpless defenders. A frightening prospect.

Nick Pope starts between the sticks in this formation as opposed to Jordan Pickford in a move many England fans will hope to see happen on a regular basis. Pickford’s distribution is exemplary but he is too prone to a mistake and fills me with little confidence when facing a high volume of shots. Pope, on the other hand, has work to do in regards to his kicking but he is a much stronger shot-stopper and commands his area better than the Toffees keeper.

Pope has played the previous three games for England in the absence of the injured Pickford and kept two clean sheets whilst doing so, albeit against far inferior opposition. At 5/2, the Burnley man represents tremendous value in this market.

Away from the goalkeeping situation and Reece James gets the nod at right-back, priced at 9/4 and a viable option to start the first match of the Euros given his popularity in the international set-up, while Phil Foden (5/4), Jadon Sancho (11/8, fitness depending) and Jack Grealish are also bigger-priced selections and would add a great deal of flare to the starting XI. 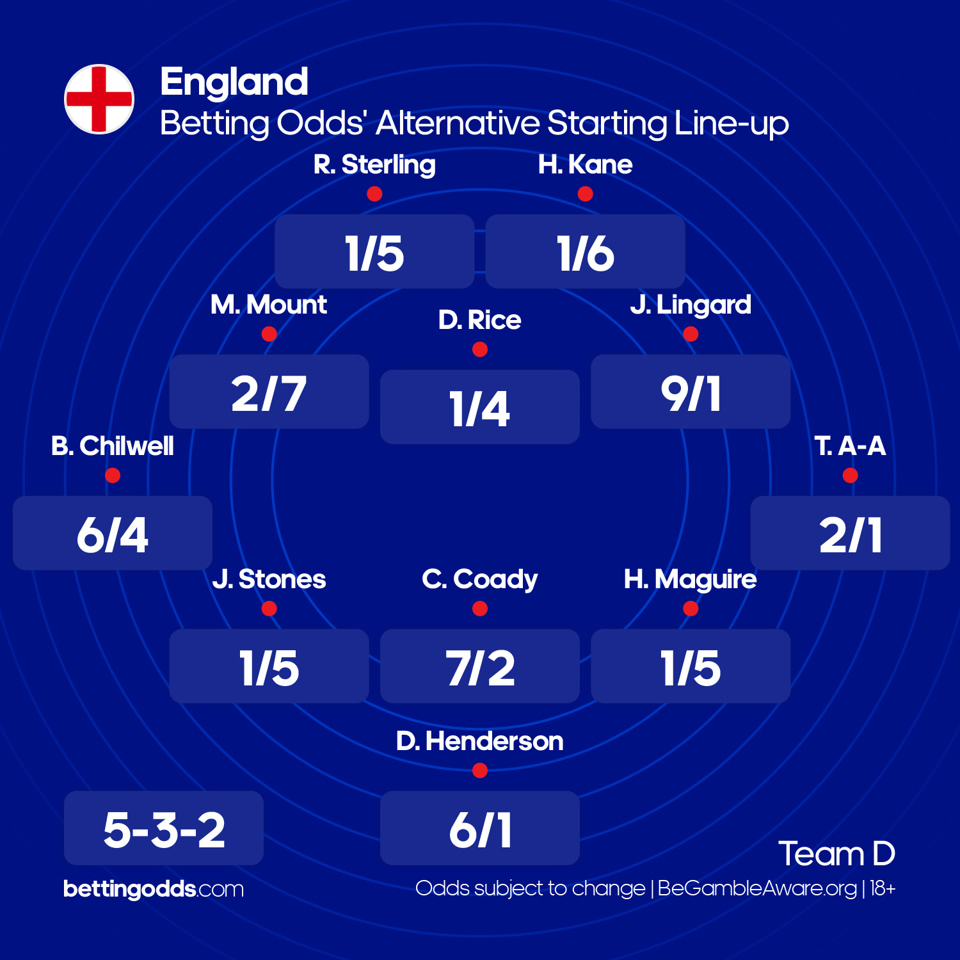 The fourth and final line-up is the least likely but features a number of players with attractive odds in this market.

Man Utd goalkeeper Dean Henderson is a 6/1 shot and could be called upon if he continues to impress at Old Trafford from now until the end of the campaign, and Pickford’s injury woes deepen. Trent Alexander-Arnold was dropped from the squad for the recent World Cup qualifiers but I expect him to be recalled for the Euros and if so he will be a prime candidate to start at right-back in a back-five (2/1).

Jesse Lingard has impressed massively since his move to West Ham and looked sharp against San Marino last week, which although is to be expected from a Premier League footballer playing against part-timers, still shows that he is relishing his new found confidence.

While it is unlikely he will start the Three Lions’ opener and not even a guarantee that he will make the final 23-man squad, the 9/1 on offer makes Lingard the highest priced player in this market who has a slightly realistic chance of featuring from the outset against Croatia, especially as we all know just how highly he is rated by Southgate.

The ever-present Mason Mount would partner Declan Rice or Jordan Henderson in midfield in our hypothetical ‘Team D’, while Sterling is recalled to partner Kane as a two-man pairing up front.

What would be your starting eleven for the first game against Croatia? Let us know your thoughts by Tweeting us @BettingOddsUK!