Welcome to BettingOdds.com’s Euro 2021 Shots & Goals Cheat Sheet, where we’ve compiled all the stats from last season’s top goalscorers and shot-takers to help sniff out some potential value in these markets for the upcoming tournament. 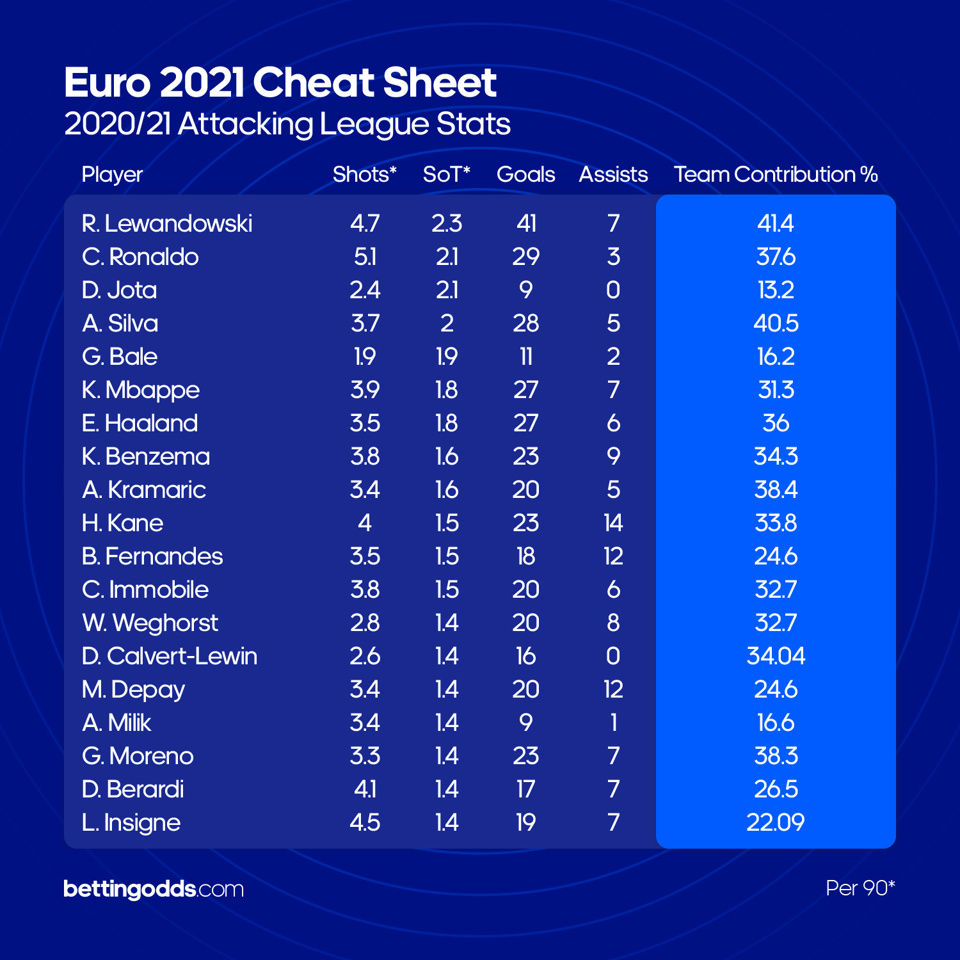 Ronaldo averaging 5+ shots a game in Serie A

It’s unsurprising to see Cristiano Ronaldo’s name too far away from this list when you consider how lethal the Juventus front man is in the final third. Although now aged 36, the veteran goal-addict still tops the pile for shots per 90, amassing a sensational 5.1 on average every game! CR7’s shots on target stats per 90 are slightly lower at 2.1 and rank him joint-second behind Bayern’s Robert Lewandowski (2.3), while his shot-to-goal conversion is sizably behind the Poland striker, with 29 goals to Lewandowski’s somewhat unfathomable 41.

It goes without saying what a force Ronaldo is for Portugal and just how important he will be to his country’s chances of retaining their crown as the kings of Europe this summer. With so much creativity in their midfield and out wide - with the likes of Bruno Fernandes, Bernardo Silva and Diogo Jota all supplying their talisman up top - it doesn’t take a genius to work out that Ronaldo will once again be at the forefront of things where goalscoring and letting shots off are concerned.

Sticking with Portugal, Diogo Jota’s form for Liverpool this season has been impressive, despite him missing a large chunk of the campaign through injury. The former Wolves forward still managed to score 9 league goals for the Reds, averaging 2.4 shots per 90 minutes, with 2.1 of those landing on target. Jota will be key for Portugal at the Euros with his link-up play alongside Ronaldo, Silva, Neves, Felix and Fernandes pivotal for their chances of qualifying from the Group of Death ahead of France and Germany.

With the emphasis so frequently on Ronaldo and Fernandes in the shots department, Jota could offer some nice value in the betting so keep your eyes peeled for him when scouring the markets. As we can see from his numbers this season, he rarely disappoints, while his form for Portugal has been stunning since he made his senior debut in 2019 - scoring six times in just 12 outings for A Seleção (all competitions).

Interestingly, Inter Milan striker Romelu Lukaku is nowhere to be seen in the top-20 players for shots on target per 90. The Belgian marksman only averaged 1.6 in Serie A this season despite finishing with a stunning 24-goal haul as Inter stormed their way to the title.

This doesn’t mean he should be disregarded at Euro 2021, however, far from it in fact. Belgium have been drawn in Group B for the tournament which is arguably the weakest of the lot on paper. The Red Devils are expected to make light work of Russia, Finland and Denmark to progress through to the last-16 and Lukaku will have the perfect opportunity to handsomely boost his goalscoring numbers in the process.

The ex-United man is second-favourite in the Euro 2021 top-scorer betting at 8/1 with William Hill, although if you take the 6/1 on offer from Paddy Power, the Irish bookmaker will give you a £1 free bet each time he has a shot on target. In Lukaku’s case, this should be at least once a game, if not much (much) more.

If Robert Lewandowski played for one of the bigger and better international teams, the Golden Boot would be somewhat of an unfair contest. His stats in front of goal are unrivalled at present, surpassing the 40 mark yet again in the Bundesliga alone throughout 2020/21, registering on average 4.7 shots and 2.3 shots on target per 90 mins.

While Poland are not expected to mount a serious challenge for the trophy, priced at 80/1 in the outright betting, Lewandowski’s ability to seamlessly find the back of the net practically each time he steps on grass is a factor worthy of consideration here, especially when talking about the Paddy Power offer I’ve referenced above.

Poland are expected to qualify for the last-16 as either runners-up to Spain in Group E or as a best-performing third-placed nation, so the 32-year-old will have plenty of opportunities to do what he does best at Euro 2021: take shots and score goals. He definitely could be worth backing in the top-scorer betting at 25/1 for the Paddy Power offer alone.