Welcome to BettingOdds.com’s Euro 2021 ref watch feature, where you can find out everything you need to know about the officials taking charge of the matches at this summer’s major tournament. We’ve provided the key stats for the men with the whistles to help you when selecting your bets. 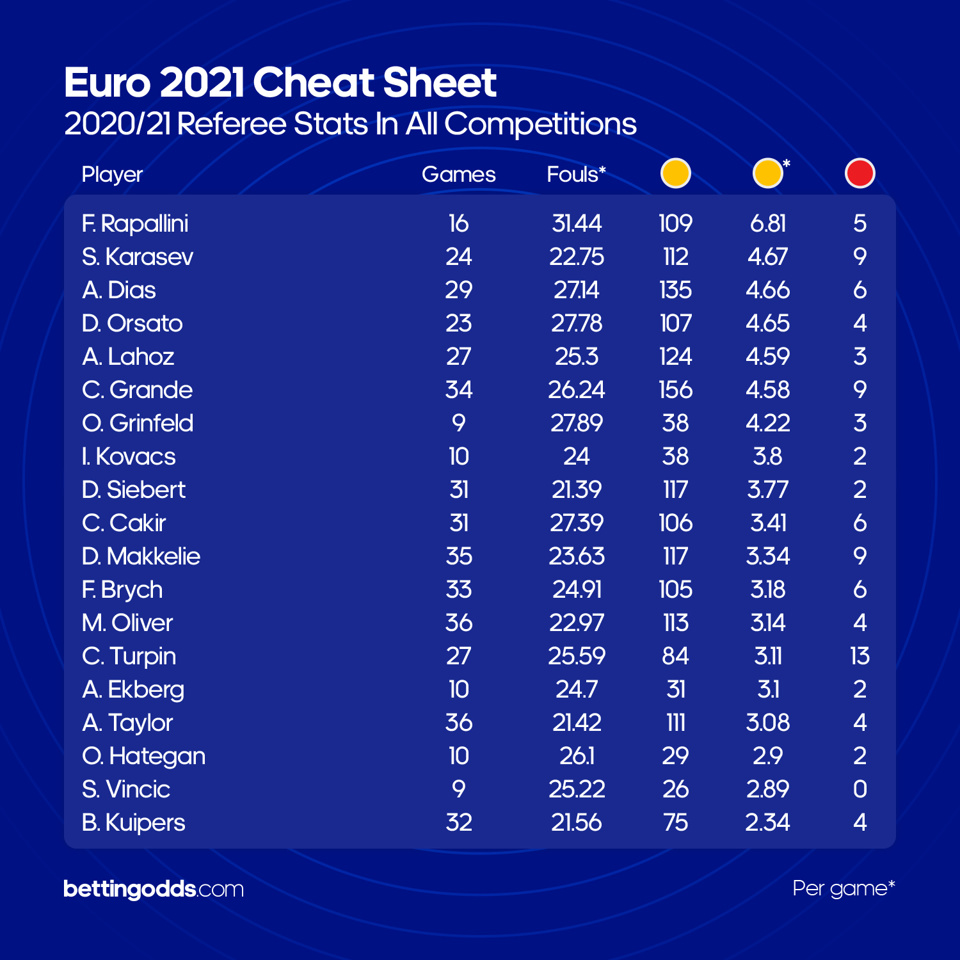 Topping the charts for the most fouls given per game is referee Fernando Rapallini. He averages 31.44 fouls in a match, with the next highest being Israeli-born Orel Grinfeld with 27.89 who is quite some distance off. His 16 appearances this season have all come in the Argentinian Superliga back in his home country.

Rapallini is part of an exchange programme within the UEFA and South American Football Confederation CONMEBOL which will see a South American referee join the European group of referees at the tournament for the first time ever; with a Spanish refereeing team led by Jesus Gil Manzano joining the Copa America 2021 selection in Argentina and Colombia this year in return.

Sitting bottom of the pile with the fewest fouls awarded per game is Daniel Siebert. His total sits at 21.77 which is almost a whopping 10 fouls fewer per game than the leader Rapallini.

The German predominantly operates in the Bundesliga, with over half of his appearances this season coming from the division. In addition to this, he’s also managed games in Bundesliga II, Europa League, Champions League, FIFA World Cup and the A & B UEFA Nations Leagues.

However, his yellows per game averages out at 3.77 which is surprisingly high for someone at the foot of the fouls table.

Carlos del Cerro Grande dominates the chart for most yellows shown among the referees at Euro 2021. His total of 156 across 34 games this season leads the way by some significant margin, with the closest being Artur Manuel Ribeiro Soares Dias with 135, followed by Danny Makkelie and Daniel Siebert, with both on 117.

After naming the league in which Fernando Rapallini officiates in, it should come as no surprise that the Argentine boasts the highest yellow average of any referee at the tournament. Despite only reffing 16 games this season, he has brandished an astonishing 109 yellow cards, meaning he possesses an average of 6.81 per game.

This is head and shoulders above his colleagues, with the next highest being Russian Sergey Karasev with 4.67 yellows pg who has only taken charge of eight more games than Rapallini, while showing an additional three yellows than the Argentine.

Finally, the man who has produced the most red cards is Clement Turpin. Games with the French-born ref at the helm have seen 13 reds, with 12 of those incredibly coming in just 18 Ligue 1 matches this season. His other came in the single UEFA Nations League A game that he led.