As BettingOdds.com continues to bring you Cheat Sheets ahead of Euro 2021 kicking off next Friday, the next market I’m looking at today is the Golden Boot.

Below, you will find workings relating to the deadliest marksmen set to feature at the tournament, ranked by their average goals per game at club level during the 2020/21 campaign. 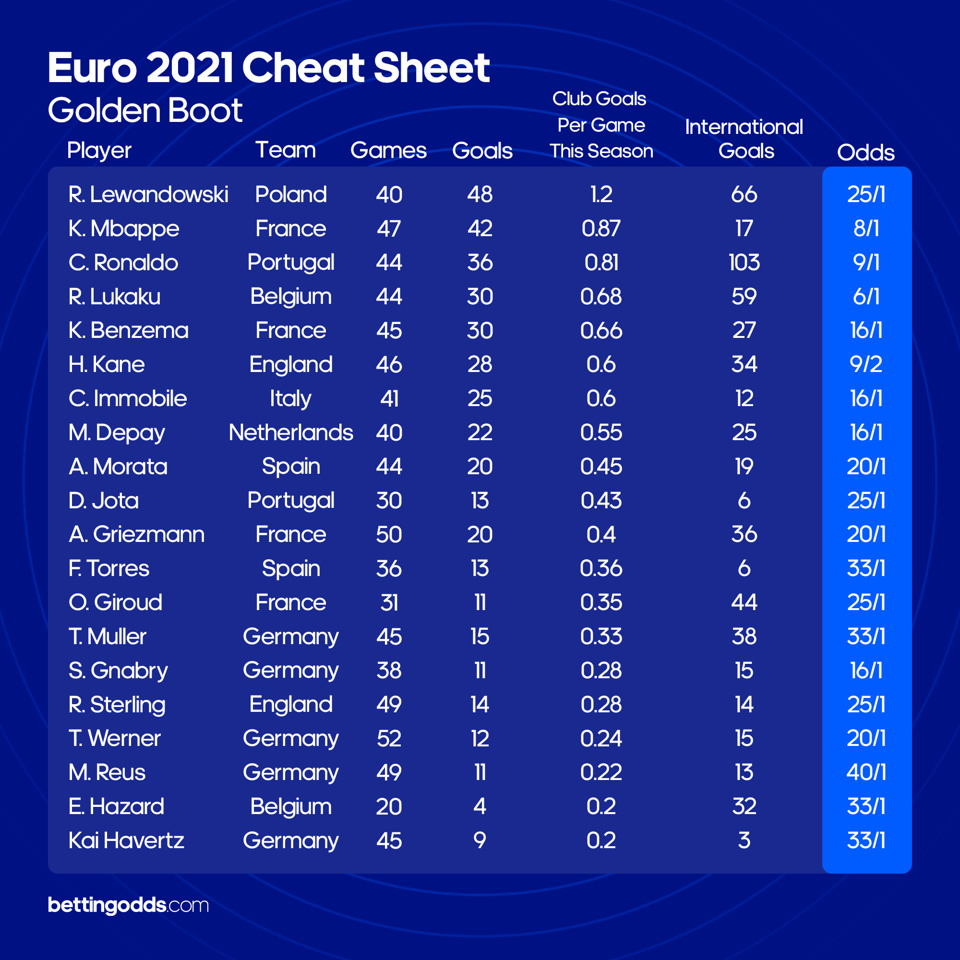 Lewandowski worth a play for Paddy Power offer alone

A familiar name crops up at the top of the list: Bayern Munich frontman Robert Lewandowski, who will be looking to help Poland qualify for the last-16 and beyond this summer. The 32-year-old was the most prolific goalscorer in Europe once again last season, scoring an astonishing 48 goals in all competitions as Bayern laid claim to their ninth consecutive Bundesliga title - that’s an average of 1.2 per game!

Unfortunately for Lewandowski, he doesn’t play for one of the stronger international outfits and therefore his chances of winning the Golden Boot are fairly slim, illustrated by his price of 25/1 in the market. He could, however, still be worth a bet with Paddy Power due to the Irish firm offering punters who back him a £1 free bet each time he registers a shot on target.

Mbappe could go the distance with France

Kylian Mbappe is among the favourites in the Euro top-scorer betting at 8/1, and one glance at his stats from this season tells you why. The 22-year-old enjoyed another goal-laden campaign for PSG, netting a whopping 42 times in all competitions.

With so much creativity in the France squad, Mbappe won’t be short of supply this summer and his price is certainly an attractive one, especially when you cast your mind back to how well he performed at the 2018 World Cup, then aged just 19.

France are also joint-favourites alongside England to win the tournament, and should travel deep into the competition which only enhances Mbappe’s chances of winning the prestigious award.

Cristiano Ronaldo may now be well into his thirties but he is still performing like the 25-year-old who lit up the Bernabeu every week. The Juventus forward will spearhead a really strong Portugal side at Euro 2021 which, like France, has so much creative prowess.

This could well be Ronaldo’s final European Championship, as the next time the tournament rolls around he will be 39, so he’ll want to bow out on a high and repeat his exploits from Euro 2012, where he won the Golden Boot award alongside several others after scoring three goals.

The 36-year-old notched 36 goals in 44 outings for Juve last season (an average of 0.8 per game) and will carry a huge deal of momentum into the Euros. At 9/1 in the market, he’s another interesting proposition.

Lukaku & Kane can boost their tally's in group stage

Elsewhere, there’s been plenty of interest around Romelu Lukaku (6/1) in the market due to the group Belgium have been placed in for qualifying. One would expect the Red Devils to make light work of Denmark, Finland and Russia, with Inter Milan striker Lukaku presented with a good chance of bolstering his goal-tally in the process.

Harry Kane is favourite in the market heading into the tournament at 9/2 and just like Lukaku could find himself with plenty of opportunities in front of goal in the group stages, especially in the games against the Czech Republic and Scotland.

As we can see from the Cheat Sheet, the England front man actually ranks all the way down in sixth position for goals scored per game last season with 0.6, though we are all well aware of the ability he possesses in the final third.

Returning Benzema not to be underestimated

A really interesting play could be France’s late addition Karim Benzema. Having been frozen out since 2015, Didier Deschamps surprised many by recalling the Los Blancos striker for the tournament, and he is now a 16/1 outsider in the top-scorer betting.

It remains to be seen whether or not Benzema will be taken as a squad player or as France’s main striker, but if it proves to be the latter then I certainly think he could be worth a dabble due to his vast experience and finishing ability, not to mention the team he will be playing in.