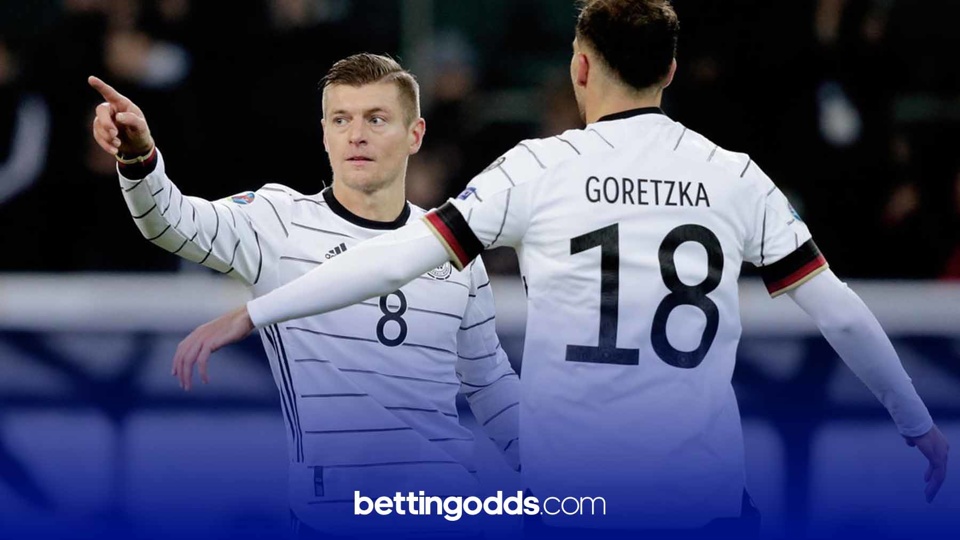 England v Germany is one of the most famous fixtures in football history and the two old foes once again face each other, this time in the Round of 16 at the European Championships. The Three Lions failed to score against Germany in both International Friendlies that they played back in 2017 and fans will be hoping for much more with the opportunity that now lies in front of them with their potential plotted route to the final looking one of the most generous in decades.

Here at BettingOdds.com we’ve taken a look through the main betting markets for the match and have some key stats which will hopefully lead to some profitable punting for the game.

The game takes place at Wembley kicking off at 5pm and this will be England's 300th international match they have played there. This will be their 77th match at their new site since it reopened in 2007. The Three Lions have won 187 matches at the home of football (D73 L39), and are still unbeaten in their 14 EURO or World Cup finals matches at Wembley (W9 D5).

In our opinion England always tend to go off a little shorter in the betting markets than what they should be at major tournaments due to the copious amounts of patriotic punting from the public. This potentially looks the case tomorrow with England priced at 6/4 to win the game in 90 minutes. The draw can be backed at 2/1 with Germany looking an attractive price at 9/4 with Paddy Power.

The last four meetings between these two sides have all been friendlies which have taken place since 2013. Three of those games have featured both teams failing to get on the scoresheet and have been relatively tight with two 1-0 scorelines to Germany and a most recent 0-0 in 2017.

Germany look too big a price at 9/4 in our opinion in the Match Result market, but it would be the 21/20 odds-against price ‘To Qualify’, that really stands out as a very backable bet.

Peripheral markets such as Player Shots on Target are as popular as they have ever been with British punters and having a look at the market for England v Germany, we can see that Betfair and Paddy Power and Betair are taking no chances on Harry Kane having 2+ shots on target. This selection is priced at 5/4, and after Kane has only registered one shot on target in his last three matches we’d be wary of taking these short prices in the shot markets for the England captain.

Southgate’s side have registered just six shots on target in their three games at the tournament with only two of the 24 teams having a lower total than that with Finland (3) and Slovakia (2). For this reason we’d be approaching this market with caution, but with 50% of England’s total shots on target coming from Raheem Sterling, if having to choose anyone, it would be the Manchester City man we would want onside at 4/7 with Betfair.

England currently possess the best disciplinary record at Euro 2021, having been shown just one yellow card which went to Phil Foden against Croatia. Germany on the other hand have picked up five in the group stage and the referee for the game will be Danny Makkelie who spends most of his time officiating in the Netherlands where he brandished 2.88 yellows per game on average last term. Although it’s worth noting that his ratio was significantly higher over Makkelie’s eight Champions League matches showing a healthy 5.25 yellow cards per game.

Raheem Sterling has scored both goals for England so far in their narrow 1-0 victories over both Croatia and the Czech Republic. The 28-year-old can currently be backed at a best price of 3/1 to hit his third goal of the tournament with fellow forward Harry Kane a shorter prospect at around 7/4 with most firms.

Kai Havertz is another player with two goals already to his name at this summer’s European Championships having bagged against both Hungary and Portugal. Havertz has amassed more xG than any other Germany player at the tournament (2.2) and five goals in his last eight starts for club and country he’s a player who looks overpriced at 4/1 to score anytime with Sky bet, while William Hill are the next best price at 10/3.

The anytime assist market is another that has grown in popularity of the course of the season and with certain bookmakers such as bet365 and Paddy Power allowing customers to now include these in their ‘bet builder’ sections, the popularity seems to continue to rise.

Having a look at the markets and one player who looks a generous price is Robin Gosens who has a goal and assist to his name at the tournament. No player has a higher xA (expected assists) total in the Germany squad than Gosens with (1.1xA) and with quotes of 15/2 available from Betfair/Paddy Power he looks a good prospect here.

Should Jack Grealish start for England he may also be worth some consideration at 7/2 with Betfair. The Aston Villa man set up Raheem Sterling in England’s final group game and registered six 10 assists in 26 league games for Dean Smith’s men last season.

Remember, the game can be seen live on BBC 1 at 5pm. We’ll have a full range of stats and tips for the game here on BettingOdds.com and if you are having a bet, please do so responsibly.