Just four teams now remain in this summer’s European Championships with England playing in the second of the semi-finals which take place at Wembley at 8pm on Wednesday against Denmark. We’ve once again provided you with our Cheat Sheet for the game which gives you all the data from the tournament and last season to help you hopefully pick out some profitable punts.

England lost 1-0 to Denmark the last time that these two teams met in the Nations League last October. England have failed to score in both fixtures against Wednesday’s opposition in 2020 with the other fixture finishing 0-0.

The Three Lions may be the 11/8 favourites to lift this summer’s trophy but Denmark should not be underestimated after the way they have bounced back after group stage defeats to both Belgium and Finland.

Gareth Southgate’s men have, however, been fairly faultless at Euro 2021 and have not conceded a goal in the five games they have played. They will come into this game in front of their home fans in high spirits after an emphatic 4-0 win against Ukraine, with striker Harry Kane now having scored three goals in his last three appearances. 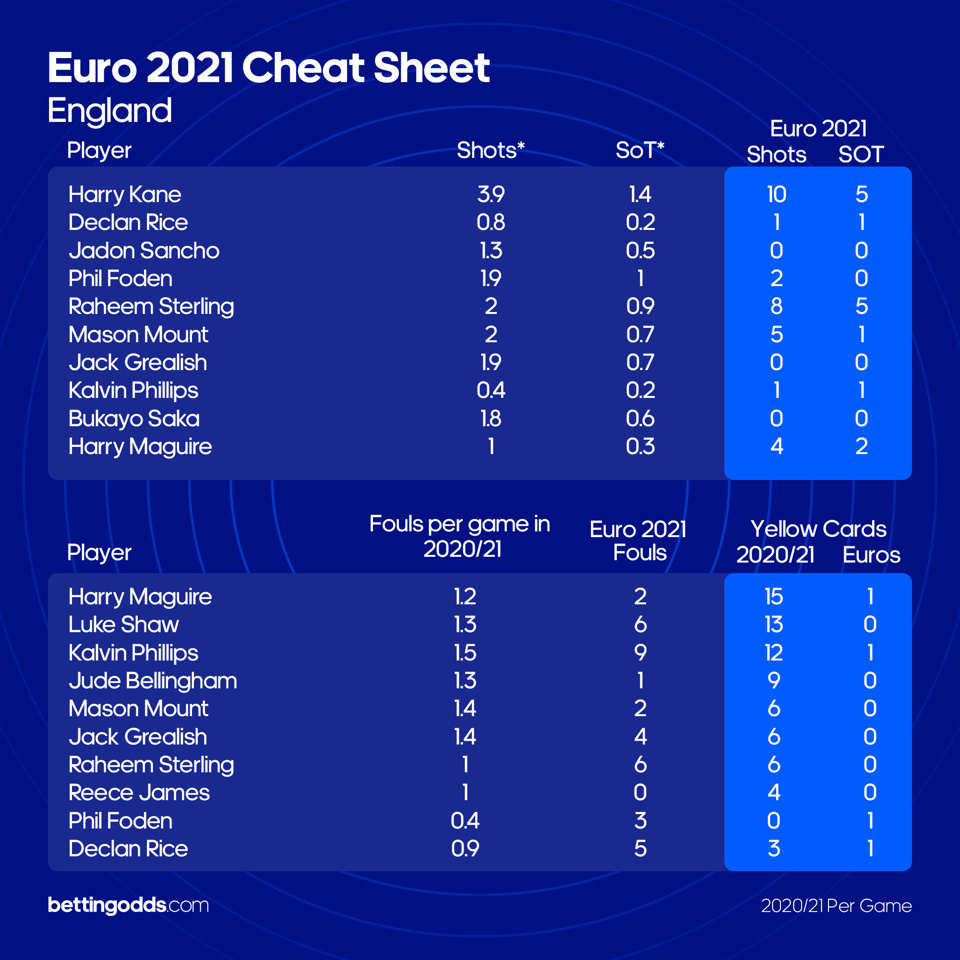 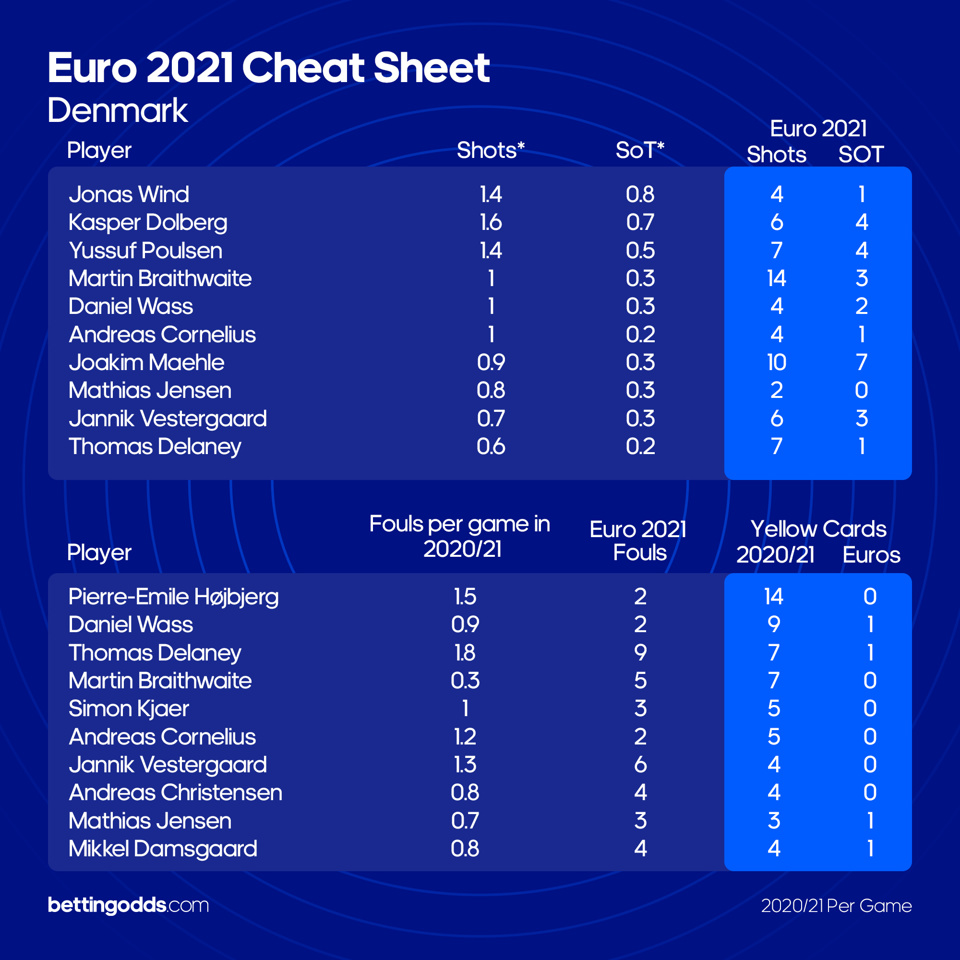 Harry Maguire was on the scoresheet for England with a thumping header against Ukraine, and with the Manchester United captain avoiding a booking, he will once again start at the heart of the defence against Denmark.

Against both Germany and Ukraine, Maguire has taken two shots, with one of them hitting the target in each match. The 28-year-old has in fact registered a shot on target for England in four of his last six competitive games for England and we’d expect the 15/8 for him to have one against Denmark to shorten slightly before kick-off.

With an impressive seven shots on target, only two players in Alvaro Morata and Patrick Schick have hit the target more than Joakim Mahele at the tournament. Maehle has played five games at the tournament and has registered 2+ shots on target in three of those, hit 1+ in one and drew a blank in the opening fixture against Finland. At 9/5 with Betfair we’d be keen to have Maehle onside to have a shot on target.

Harry Kane was emphatic against Ukraine on Saturday evening and very nearly made it a perfect hat-trick with an audacious left-footed volley from the edge of the area that nearly crept in the top corner. Kane has looked a shadow of himself in England’s opening games but with three goals to his name in the tournament, is now in with a sniff of the Golden Boot, for which he is 7/2 to do so with Paddy Power.

Having a look at the anytime goalscorer market for the match with Denmark and Tottenham’s talisman is just 11/10 to find the back of the net with most firms. Two of Kane’s three goals have come courtesy of his head and with quotes of 10/1 on offer from Sky Bet and 17/2 from Betfair, we think there could be a bit of value in this selection of Kane to score via his head.

You can find a full match preview and tips and predictions for the game here on BettingOdds.com. Enjoy the Semi-Final, let’s hope the boys can do it and please always gamble responsibly.

Referee for the game 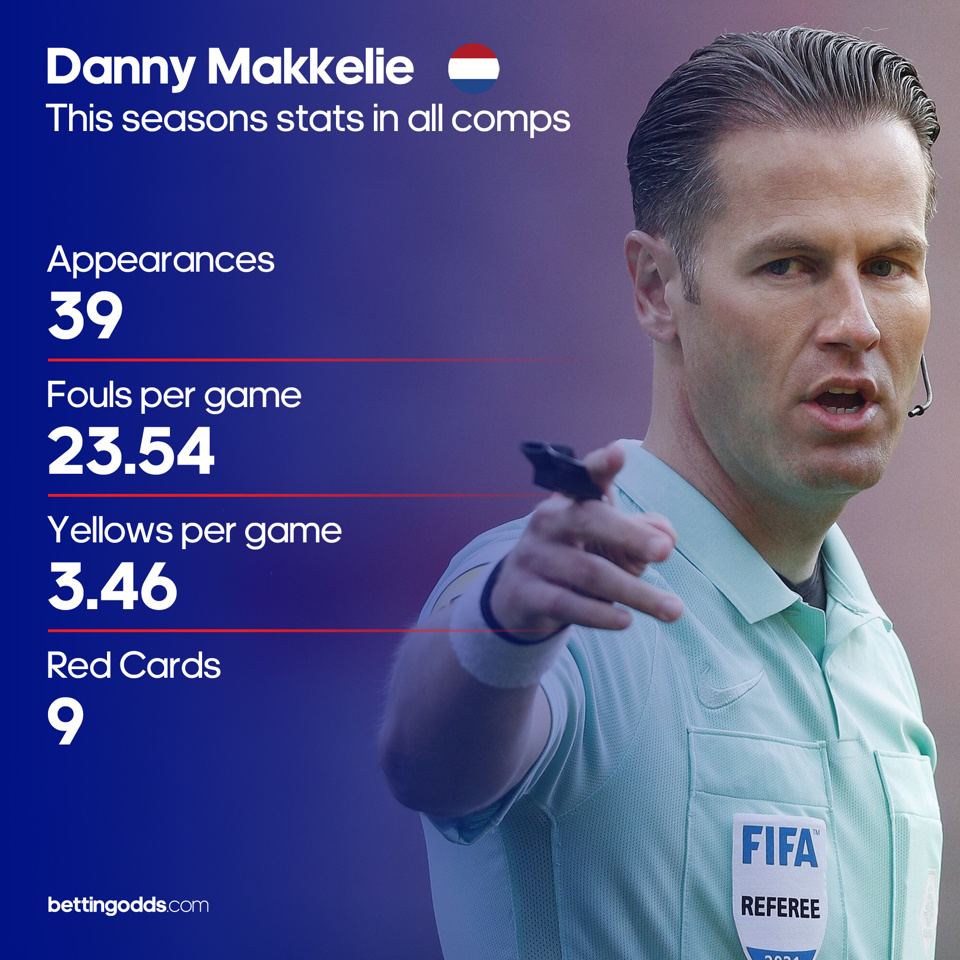