It’s the one that many will have been counting down the days for. In a duplicate of the 2018 World Cup semi-final, England and Croatia meet for the third time since that fateful evening in Moscow. Much like the UEFA Nations League format in 2018, the two sides have been drawn into the same group at this summer’s tournament and will kick off proceedings in Group D inside Wembley Stadium at 14:00 on Sunday 13th June.

For England, it appears as though this fixture will come too soon for a couple of regulars in the form of Harry Maguire and Jordan Henderson. Central defender Maguire is unlikely to be involved having only just started running again after injuring his ankle last month. While midfielder Henderson played the second half of England’s final friendly against Romania after nearly four months out following groin surgery.

Croatia, on the other hand, are injury-free, and should boast a fully fit 26-man squad to choose from for this potential group-topping decider. 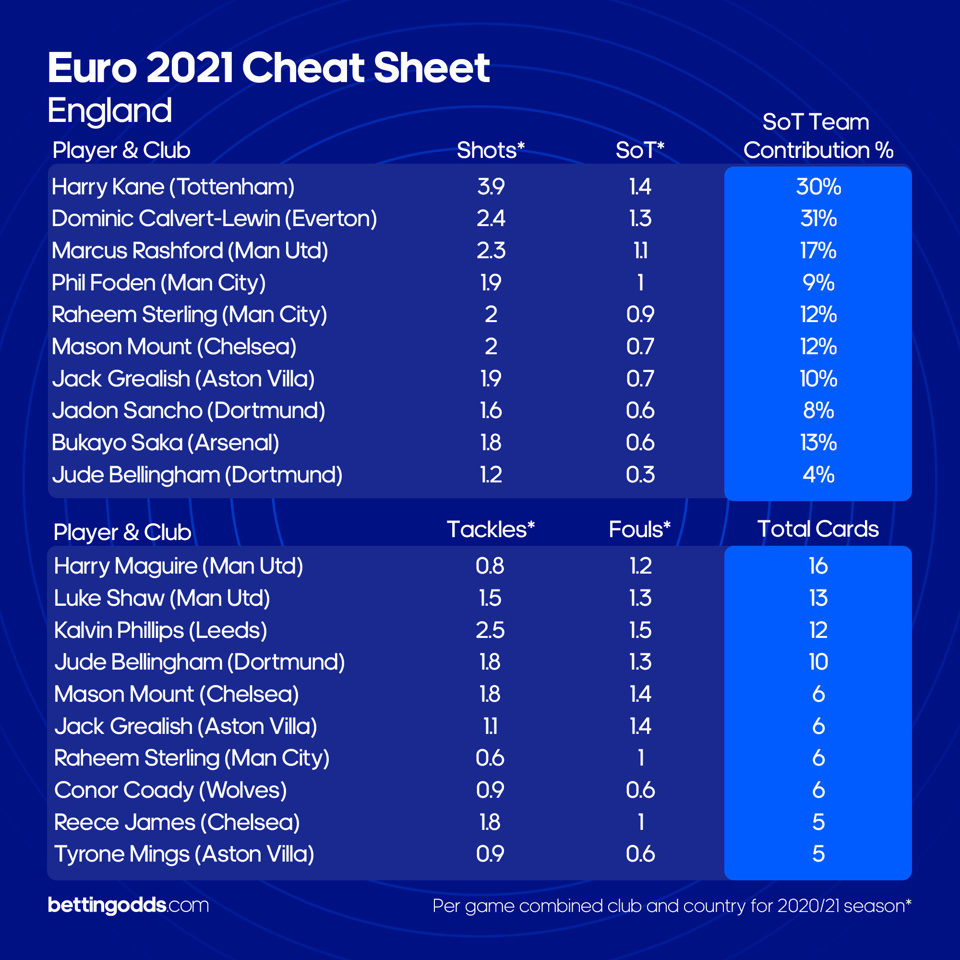 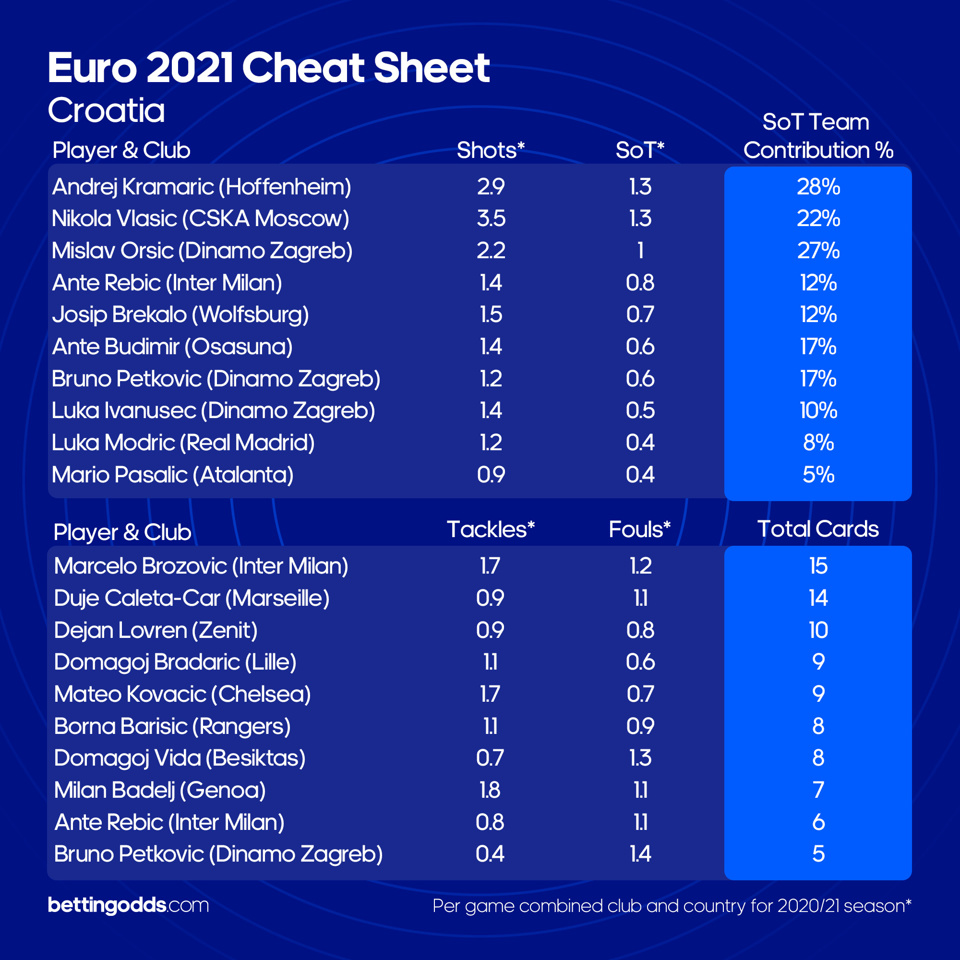 What won't surprise anybody is that England's skipper Harry Kane tops the chart for the highest average of shots on target per game with 1.4. Interestingly though, there are three players between the two teams who boast only 0.1 less than the Tottenham striker. We can safely ignore Calvert-Lewin as he's not expected to feature much, unless Kane suffers some sort of setback during the tournament.

For the Croats, both Andrej Kramaric and Nikola Vlasic are right up there with 1.3 shots on target per game averages. It's still uncertain who will lead the line between the ex-Leicester man, Ante Budimir and Bruno Petkovic, but Kramaric can make a strong case after the season he's had. 26 goals in 42 appearances for Hoffenheim and Croatia is an impressive return, and one that stands him in good stead to play a major role on Sunday.

Vlasic, on the other hand, may typically play in a more advanced role for club than he does on the international stage, but his stats could suggest that there is potential value to be found in the non-household names.

On the England side of things, question marks over their starting XI could offer some slightly better prices than usual. Phil Foden and Jack Grealish are both in contention for their first appearance at a major senior international tournament, and you’d expect either one to light up the stage with their talent. Surprisingly, when you break it down, there isn’t an awful lot separating the pair. The two share an equal shots per game of 1.9, with Foden's shots on target avereage only 0.3 higher than the Villa talisman's. It might be worth remembering the club teams that both play for though, and the fact that Grealish will be playing with a higher calibre of player in the international ranks, means he could well find greater opportunities to go for goal in this match up.

As previously mentioned, Man Utd skipper Harry Maguire is all but set to miss England’s opener which could result in a change of formation by Southgate from a back four to a three or five-man defence.

One name you’d expect to see on the home side’s team sheet is Luke Shaw. The full back has revitalised his career at Manchester United this past season, with many changing their opinions about his ability and application. Shaw is second to only Maguire for racking up the most cards of any player across both sides with 13. And without his United teammate alongside him in the heart of the Three Lions defence, it could be a complicated afternoon for the 25-year-old’s possible return.

If so, at least one of the two names inside England’s top ten most cautioned players is likely to feature who otherwise wouldn’t. Both Conor Coady and Tyrone Mings have similar tackles and fouls averages as one another, with the Wolves captain picking up two more yellows than his Midlands counterpart who saw himself sent off once for Villa this season.

Neither has appeared at a major tournament for their country before, so with an unsettled backline in addition to the nerves that come with representing England, could mean that a booking for either may be on the cards should they start. You could also argue that Mings may be preferred over Coady no matter which system Southgate chooses to deploy, considering that he is a left footer and can provide that natural balance to England’s set up.