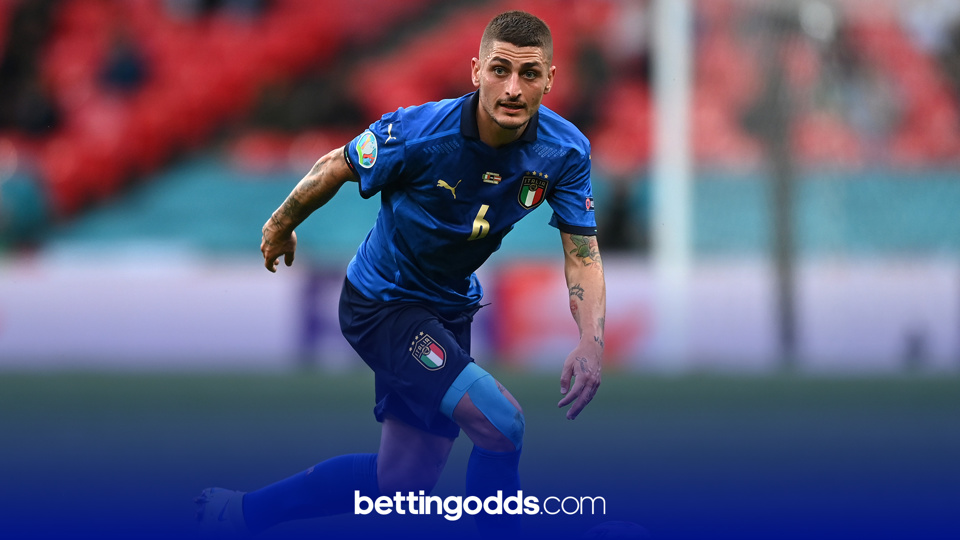 Glen Johnson would like Marco Verratti at Anfield next season.

Liverpool have already secured the signing of French defender Ibrahima Konaté ahead of the new Premier League season which kicks off this weekend, but the club’s former defender Glen Johnson has backed his former side to make moves for Euro 2020 winners Lorenzo Insigne and Marco Verratti.

BettingOdds.com caught up with the former England international to discuss the future’s of Alex Oxlade-Chamberlain, Nat Phillips, and Tammy Abraham, as well as his predictions for who will win the Premier League title this season and the 2021 Ballon d’Or.

With still a month to go in the transfer window, in an ideal world, who would you like to see your former side Liverpool sign this summer?

“I really like Lorenzo Insigne. He’s been brilliant for years, but he performed very well during the Euros. I just enjoy the way he plays and I think he would suit Liverpool too.

“I like Marco Verratti as well. They’re two huge names so it’s not rocket science choosing them as ideal signings for Liverpool.

“During the Euros you could see both of their desire to win and that’s what’s needed if you’re going to win league titles. You need those sorts of characters.”

“Yes. Possibly. West Ham’s a fantastic football club and they will let Alex enjoy his football. Obviously the only concern with Ox is that he’s got to stay fit, because he’s a fantastic player with bags of energy and great ability but that’s no good on the treatment table.

“Hopefully his body can get through all of next season. But I think West Ham United and Oxlade-Chamberlain would be a perfect fit. Moyes would take the shackles off him, let him go and enjoy himself, and see what he can do.

“Touch wood Alex can stay fit and get back to his best.”

Bayer Leverkusen are reportedly interested in Liverpool defender Nat Phillips. How much did he impress you last season and do you believe it’s time for him to leave the club considering the signing of Ibrahima Konaté?

“He really impressed me as he came into the side during a really tough time and he stepped into shoes that were impossible to fill and I think all the other young kids did that as well.

“They should all be proud of what they’ve done and Liverpool would have been considerably worse off if they didn’t step in and perform.

“I don’t think Nat should leave now as he’s young. I’d like to see him leave on loan as he shouldn’t give up on the Liverpool dream just yet and I’m pretty sure he won’t.

“If he could get a loan deal to a top side where he could gain loads of experience then I think that would be a very good option for him.”

Chelsea striker Tammy Abraham has been linked with a loan move to Arsenal and West Ham in the past week. If they’re unable to secure the signature of Erling Haaland, do you believe he still has a future at Chelsea considering that Olivier Giroud has already departed the club?

“No I don't actually. Even if another club doesn’t sign him, I don’t think the manager likes him and that’s been proven by the many times Tammy could have come into the side and Tuchel opted for something different instead.

“Tammy however can get enough goals in the Premier League so I’m sure there will be many teams after him, but for him I think the time is right for him to leave Chelsea.”

At this moment in time, who would you give the 2021 Ballon d’Or to?

“I’d probably say N’Golo Kanté. You don’t often see holding midfielders win the trophy. It’s normally strikers because they do the glossy bit, don’t they? But I’m going to go with Kanté.

“None of these teams can perform if you don’t have a Kanté. Unless you’ve got that anchor, like a Lucas Leiva, you have to have that sort of player to perform. But when the strikers go forward and perform, they forget about Kanté. They forget that he’s just won the ball back on the edge of the box and driven it 30 yards. I’d like to see a holding midfielder get it. It’s like the only people that appreciate that role are the players themselves.”

And finally, who are you backing for the title this season? Could either of your former clubs Liverpool or Chelsea mount a serious title challenge?

“I think if Chelsea get a new striker I think they could really take the title race.

“I fear for myself about United! They’re banging on the door and they weren’t even in form. I think their home record last year was awful and they were the ones who took the race to City. I think if they get it right and improve week in, week out, they can be a force this season. Obviously City are going to be favourites and rightly so because of their squad. But if Chelsea sign a striker I think they could do it.”

Bet Calculator
football/premier-league/insights/glen-johnson-on-who-liverpool-should-sign-this-summer
uk
Advert Disclaimer
Bettingodds.com is a free online resource which endeavour to provide helpful and useful content and odds comparison to its visitors. Please be advised that Bettingodds.com accepts affiliate commission from the companies appearing on the site, and agreed commission levels impact the location and order in which the companies (and/or their products) are presented on the website. Any ratings that appear on this site is determined by our subjective opinion of the brand but also based on market share and reputation, each brand's conversion rates, commission paid to us and general consumer interest. Company listings on this page don't imply our endorsement. We do not feature all providers on the market. Except as expressly set forth in our terms and conditions, all statements and warranties regarding the information presented on this page are disclaimed. The information, including odds, which appear on this site is subject to change at any time.
Bet £10 Get £30 In Free Bets (APP Only)
#AD New UK, IE & Malta users only. Min. £10/€10 first deposit only using Debit Card or Trustly. Free bets expire in 90 days. T&Cs apply.
Bet £10 Get £30 In Free Bets
#AD 18+. Play Safe. New customers using Promo code H30 only, Min £10/€10 stake,  min odds 1/2, free bets paid as 2 x £15/€15, free bets credited after  settlement of first qualifying bet, free bets will expire 30 days after  the qualifying bet is placed, payment method/player/country restrictions apply.
Bet £10 Get £20 In Free Bets
#AD Min stake £10. Min odds 1/2 (1.5). First bet only. Free bets expire in 7 days. Cashed out bets won’t apply. Payment method restrictions. Online UK customers only. 30 days to qualify for £20 in Free Bets. 18+. T&Cs apply
Welcome Offer
#AD Bet £10 & Get £50 in Free Bets for new customers at bet365. Min deposit requirement. Free Bets are paid as Bet Credits and are available for use upon settlement of bets to value of qualifying deposit. Min odds, bet and payment method exclusions apply. Returns exclude Bet Credits stake. Time limits and T&Cs apply.
Bet £10 Get £30 In Free Bets + 100 Free Spins
#AD 18+ New customers only. Opt in, bet £10 at odds 2.00+ within 7 days, no cashout. Get 3x £10 Free Bets, set events at odds 2.00+. Plus 100 Free Spins on Big Bass Bonanza, no wagering. Free Bets and Spins expire in 7 days. Card payments only. T&Cs apply. Please gamble responsibly.
Bet £10 Get £60 in Bonuses
#AD New UK customers only. Register using the promo code BETFRED60, deposit and place first bet of £10+ on Sports (cumulative Evens+) within 7 days of registration. First bet must be on Sports. £20 in Free Bets to be used on Sports, £10 in Free Bets to be used on Lotto and 50 Free Spins (20p per spin) credited within 48 hours of bet settlement. Further £20 in Free Bets credited 5 days after settlement. Bonuses have a 7-day expiry. Payment restrictions apply. SMS verification and/or Proof of I.D and address may be required. Full T&Cs apply.
Bet £20 & Get It Back As CASH If It Loses
#AD New customers only. Place your FIRST bet on any Football market and if it loses we will refund your stake in CASH. Max refund for this offer is £20. Only deposits made using cards will qualify for this promotion. T&Cs apply.
Get Up To £100 In Free Bets
#AD New customer offer. Place 5 x £10 or more bets to receive £20 in free bets. Repeat up to 5 times to receive maximum £100 bonus. Min odds 1/2 (1.5). Exchange bets excluded. Payment restrictions apply. T&Cs apply.
Bet £10 On Football & Get £40 In Free Bets + £10 Bonus
#AD £/€10 deposit using promo code "10FREE" - Minimum stake £/€10 at odds of 1/2 (1.5) - Free bets credited upon qualifying bet settlement and expire after 7 days - Free bet stakes not included in returns - Casino Bonus must be claimed within 7 days • To withdraw bonus/related wins, wager the bonus amount 40 times within 14 days • Casino Bonus expires after 60 days - Withdrawal restrictions, payment methods, country & full T&Cs apply
Get £35 In Free Bets
#AD Place a qualifying £25 fixed odds bet at odds of 1/2 or greater. Qualifying bet cannot be placed in-play or cashed out early. A first free £5 fixed odds bet will be credited upon settlement of the qualifying bet. 4 x following £5 free fixed odds bets will be added to your account on consecutive days. T&C's apply, 18+ begambleaware.org
Premier League
HOME
FREE BETS
FOOTBALL TIPS
LIVE SCORES