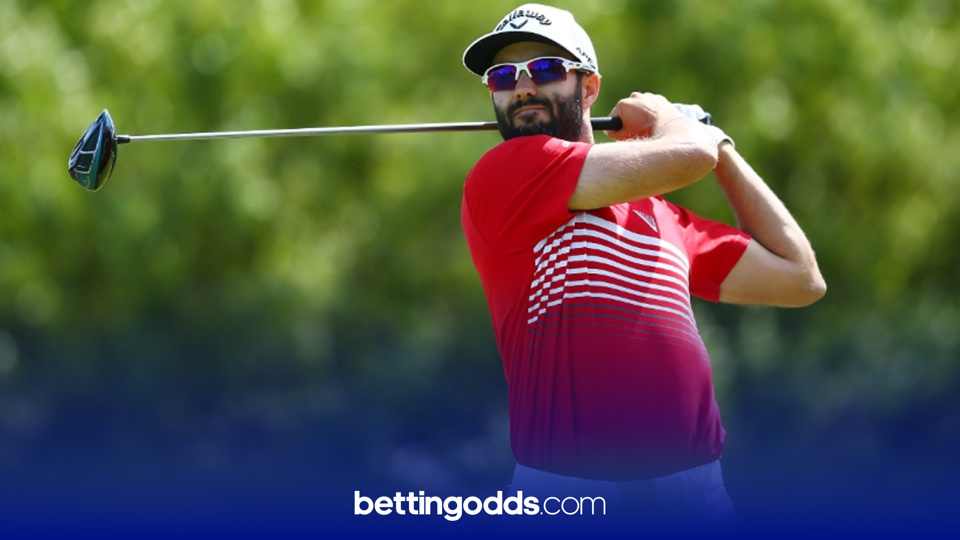 Our golf tipster Russell Palmer is back again for this week's PGA Tour event, the Workday Charity Open from the Memorial Golf Club in Ohio on Thursday 9th July...

The PGA Tour has been back four weeks and having not really threatened the scorers with my tip in the first tournament back I'm pretty pleased with the return in the last three weeks. If you've been following you'll have picked up a 30/1 winner (in the shape of Webb Simpson at the RBC Heritage) and three placed finishers, the most recent last week in Tyrrell Hatton who finished in a tie for fourth place at the Rocket Mortgage Classic.

Last week's event was won by Bryson DeChambeau, tipped by yours truly for the two events prior but considered too short last week sent off around 6/1 in a 150+ field.

DeChambeau's golf has been incredible since the return, the American is 67 under par for his 16 rounds and he simply overpowered the Detroit Golf Club. I'm still not convinced by his wedge play but his phenomenal distance means he's playing his approaches in with a short club on every par-4 and he was reaching par-5's with a drive and an 8-iron on Sunday.

As you'd expect, DeChambeau's price for the majors still yet to be played this season shortened across the board. 12/1 second favourite for the USPGA Championship next month, 14/1 for the US Open and probably the most interesting 14/1 in the US Masters betting, where the lack of rough and his power will really be an advantage.

DeChambeau takes the week off and we have a stronger looking field than in Detroit with the likes of Justin Thomas, Brooks Koepka and last year's winner Patrick Cantlay in the field.

The Workday Charity Open is the first of a double-header at Murifield Village, a new tournament added to cope with the COVID rescheduling before next week's Memorial Tournament played on the same course. It'll be interesting to see how that effects the odds for those who play well this week versus those who are giving this week a miss.

A player who just missed out on a top eight finish and some each-way returns on Sunday was Viktor Hovland who I put up last week at 22/1. Like DeChambeau, the Norwegian has been in really good form since the restart, but without the putting prowess of Bryson on the greens. Even with some pretty average putting stats, Hovland himself is 49 under par for the four tournaments he's played since the players came back on tour, joint second for scoring with Lucas Glover behind DeChambeau.

Hovland's four finishes read 23-21-11-12, ultra consistent and he was just one shot off a tie for 8th on Sunday night having only shot a one under par 71 for his final round. In fact, his stats for the week in Detroit read -3 shots gained putting, which was clearly where the problem lay.

Ranking top 10 for shots gained off the tee and approaching the green, he's primed for a good performance if he can get the flat stick going in Ohio this week.

Watch: In the UK from 12.00pm on Thursday - Sky Sports
Looking for Rose to go full bloom as a course winner
Odds are currently not available for this event

I had a very long look at Xander Schauffele this week given his overall stats, but the course form of Justin Rose has just swayed me the way of the Englishman given he's seven points bigger in the betting.

We got stung at the Travelers a couple of weeks ago when I put up Rose but he missed the cut. A week off hopefully has recharged the batteries for a player who finished third and fourteenth on his first two starts back on tour.

His course form at Memorial is really strong, the winner here in 2010, Rose has four top ten finishes in his seven subsequent visits and I fancy him to go close here again at a sporting price of 25/1 with Betfair paying eight places each-way.

Further down the betting I like the look of Adam Hadwin, who can be backed at 50/1 this week with William Hill.

The Canadian has made all three of his cuts since returning including a third place finish in Detroit at the weekend. He has a little bit of course form, making the cut in three of his five visits with a best finish of 11th.

It's Hadwin's stats that really catch the eye this week though. Tied for 7th in par 4 scoring last week, plus 4th for scrambling and 2nd for greens in regulation, his game looks in really good shape to take on the challenge of Memorial.

A click bigger in the betting this week is Kevin Streelman at 66/1.

I was kicking myself for not including him last week when he had some course form and was a big price, but I was put off by his two missed cuts since coming back. This week he's shorter in the betting but has a third place finish last week and a lot of good vibes at Memorial to pull from.

He's made five straight cuts at Memorial and three top ten finishes in the last ten years. Streelman comes into my team this week with Paddy Power paying eight places.

Another to add this week and it's the very likeable Ryan Amour who has really played well the last two weeks. 6th at the Travelers the American followed that up with a tie for fourth place last week. Armour is really accurate off the tee, totally unfashionable hence his three digit price at 100/1 and I'm happy to take a chance on him with Hills paying eight places again this week.

Finally, one at a price is Maverick McNealy. Perhaps it's the name but I like this guy a lot and he shot his way into a top 10 finish in Detroit thanks to a final round 66. McNealy is a good putter and can be found as big as 125/1 with 888sport paying six places each way or as short as 66/1 with Betfair and Paddy Power who pay eight places. Hills also pay eight places and go 80/1 if you're not brave enough to go all in with 888.

I had McNealy down as one of my others to follow but with the 125/1 decided he was a value play worthy of a proper pick.

A few others who caught the eye and I'd expect to go well this week include Rickie Fowler (30/1) who played himself back into some form last week finishing 12th and has a couple of podium finishes at Memorial, whilst Jordan Spieth was playing pretty well before taking last week off and if he can have a decent week with the driver could feature at a big price of  45/1.

Hideki Matsuyama was a winner here six years ago and has two subsequent top six finishes since, he finished 21st in Detroit last week which was a good effort after just scraping past the cut on Friday. He's short enough in the betting at 16/1 this week though and given he can chuck in a shocker with the putter I'm pretty happy to overlook.

As ever, enjoy the tournament and please gamble responsibly.

Three English Championship tips and predictions ahead of this week's event from the European Tour at Hanbury Manor.

Three Hero Open tips and predictions for this week's European Tour event from the Forest of Arden.

WGC FedEx Tips & Predictions: Three against the field in Memphis

Three selections for our WGC Fedex tips and predictions getting underway at TPC Southwind on Thursday 30th July.

3M Open Tips and Predictions: Five against the field in Minnesota

Tips and predictions for the 3M Open on the PGA Tour played at TPC Twin Cities in Minnesota from Thursday.

The Memorial Tournament Tips & Predictions: Six against the field in Jack's house

Five taken against the field in BettingOdds.com's Rocket Mortgage Classic tips o the PGA Tour teeing off on Thursday…

Six tips and predictions for the Travelers Championship played on the PGA Tour on the 25th June, including Bryson…