Why Roberto Mancini can lead Italy to glory at Euro 2020

When it comes to plucking out an outright winner for Euro 2020, Didier Deschamps’ world champs France dominate the discussion.

Rightly so too, their team is simply astonishing.

Gareth Southgate’s Three Lions are in contention of course, as are defending champions Portugal, while Belgium’s Golden Generation will look to finally peak this summer. Germany and Spain simply can’t be ruled out either.

However, there’s not been too much chatter surrounding the chances of Roberto Mancini’s resurgent Italy who head into the rescheduled European Championships unbeaten in a whopping 27 games.

Roberto Mancini: “We’re not always favourites from the start, but when you look at our history, there can only be one goal: to win.”

Mancini has overseen a commendable three-year rebuilding job at the helm of the Azzurri, having taken over in the painful aftermath of the country’s shambolic failure to make it through to the 2018 World Cup under boss Gian Piero Ventura.

Mancini has restored confidence, constructed an impressive looking side, and while it sounds odd to label the Italians as a ‘dark horse’, there’s a bubbling expectation that Mancini’s men can whip up something special this summer. 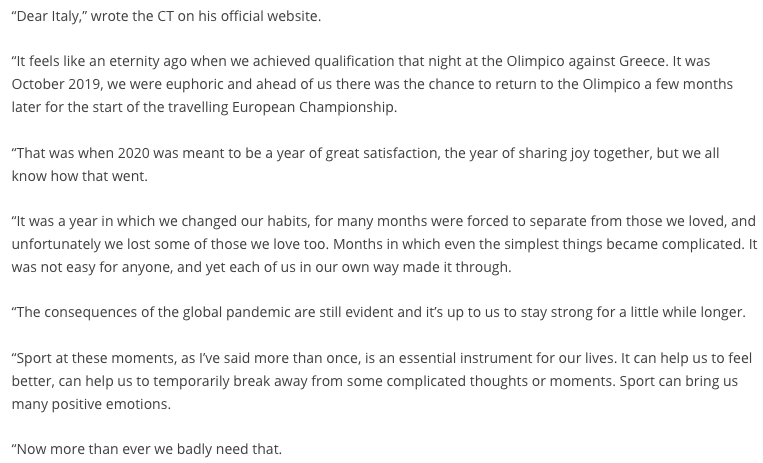 Roberto Mancini has penned an open letter to the Italian people ahead of #EURO2020...

"United under one blue sky, wearing the blue jersey, let us unite in a single shout that brings together more than 60 million Italians: FORZA AZZURRI!" 🇮🇹📩

The best managers adapt to any situation.

The Italian national team hit a nadir when they alarmingly failed to qualify for the 2018 World Cup, but the tide has changed under the irresistibly suave Mancini, who made the jump into international football that summer.

“This is a national team that has won four World Cups,” said the former Man City boss. “We haven’t won the Euros in over 50 years, it’s time to set that right.”

Like any Italian coach, Mancini exudes confidence. For good reason too.

In 32 games he’s amassed a 71.88% win rate, and lost just twice in three years. In fact, he’s currently unbeaten in a whopping 27 games - more on that shortly - and hasn’t suffered a competitive defeat since 2018.

The manager has never hid his ambition. He has a winning mentality and a CV which boasts four league titles from his time managing in Italy and England. His success in winning six domestic cup competitions in three different counties showcases his ability to thrive in the cut-throat nature of knockout football.

Prior to Mancini’s appointment Italy were all over the place.

There was no identity, no inspiration, no pride.

Over the course of the last three years Mancini has overseen a transitional period and ushered in a new era; highlighted through debuts to 33 different players under his watch.

He’s created a positive atmosphere and moulded together a stylish, technical team, featuring a blend of youthful vigour and valuable experience.

There’s now a real pride to the side - just look at how they blast out the national anthem - who adopt a possession-based approach in a 4-3-3 formation. They play with freedom, energy, and a high-tempo.

Italy are defensively strong and possess an intelligent and crafty midfield with Jorginho, Barella, and Verratti running the show, while there are plenty of other names ready to step up to the plate in this area.

In attack there are question marks over their lack of firepower; goals tend to be spread across the team. However, it’s hoped that Ciro Immobile - stunning at club level - can overcome his international-level hurdle and sparkle.

There may be a shortage of world class stars at the peak of their powers - apart from perhaps the technically sublime Marco Verratti - but there’s an ever-growing feeling that the current crop can conjure up something special this summer.

READ: Four managers to keep an eye on at Euro 2020

Mancini has brought back that winning feeling.

Yes, Italy’s qualification group was absent of big teams, but it’s still an impressive feat to win all 10 games, something no Italian side had ever accomplished. In the process, they thundered in 37 goals, while their defence was only breached four times.

In fact, in their last 16 competitive fixtures they’ve conceded only six goals. Sterner challenges in high-pressure moments await, but that is an impressive record and one that will give them buckets of confidence heading into tournament football.

Italy will be expected to win Group A, however with Mancini at the helm there’s no chance they will underestimate Switzerland, Wales, and Turkey who will each provide a different test.

Crucially, all three of Italy’s group stage fixtures will be played on home soil at Rome’s Stadio Olimpico where they’ve not lost since 2013, and never under Mancini.

Should Italy secure top spot in Group A, they will face the runner-up of Group C; one of Holland, Ukraine, Austria, and North Macedonia.

They may not be the favourites for Euro 2020, but with the pressure minimal and an exciting new generation bidding to shine, Italy will hope to go under-the-radar as they launch a quest for glory.

Winning breeds winning, and as they grow in confidence throughout the tournament Mancini’s men will begin to fancy their chances against whoever they could face in the latter stages.

They deserve to win Euro 2020 for this alone…