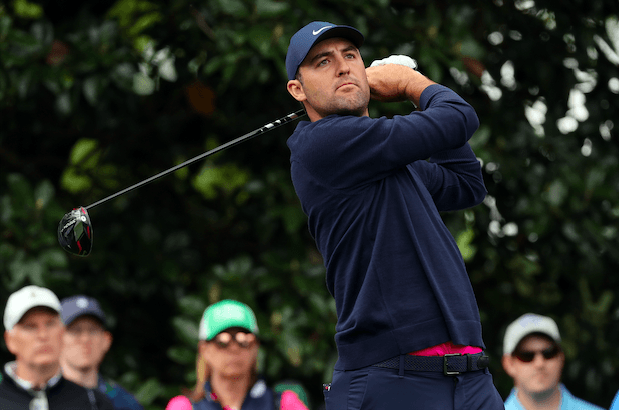 It was an eventful day two at the 2022 Masters, which saw a clear leader emerge from the pack, while big names missed the cut.

Below we take a look at the new-look leaderboard, the latest movements in the market, who won't be playing at the weekend, as well as the tee times for moving day...

Where else to start then with Scottie Scheffler: what a player, what a year he's having.

Not content with winning the Phoenix Open, Arnold Palmer Invitational, WGC-Dell Match Play, and becoming the new No.1 - all in the last few months - Scheffler has now set his sights on claiming the Green Jacket. He was simply sensational on day two, carding a 67 to open up a five shot lead at the summit on -8.

A further four players are one shot behind on -2, including Cameron Smith and Dustin Johnson, while another group of six are also in the red on -1: featuring former champ Danny Willett as well as Justin Thomas who, alongside Scheffler, registered the lowest score of the day (67) to thrust himself into the conversation after a miserable opening round.

Tiger Woods was brilliant on day one (-1), however he initially struggled on Friday in difficult conditions, opening with four bogeys in five holes.

Woods battled back with a couple of birdies, only to drop consecutive shots on the 11th and 12th. Backed by a huge following, he refused to buckle, carding two more birdies to finish on 74, meaning he's +1 overall (T19).

"I made the cut, I'm going to have a chance going into the weekend," he said afterwards.

Who has missed the cut?

Former champion Jordan Spieth missed the cut at the Masters for the first time.

Fellow major winners Brooks Koepka, Bryson DeChambeau, and Justin Rose will not be playing at the weekend, neither will Xander Schauffele.

However, Rory McIlroy , John Rahm, Sergio Garcia, Bubba Watson, Tommy Fleetwood, and Lee Westwood (+2) all made it through to Saturday.

Who is the favourite to win the Masters?

It won't come as too much of a surprise to see Scottie Scheffler top of the betting market with all bookmakers (best-priced 57/50 with SBK). Scheffler was incredible on Saturday and while there's still two days left to play, he's put himself in a cracking position five points clear of the chasing pack.

Next in the running on 12/1 we have Hideki Matsuyama, Shane Lowry, Dustin Johnson, and Cameron Smith, followed by Justin Thomas (14/1) who is well worth keeping an eye on following his superb display on Friday.

Here are the tee times for Saturday...