Next Prime Minister Odds: Penny Mordaunt was the odds-on favourite during the campaign but Liz Truss slowly closed on her throughout and finally surpassed her.
By Adam Roberts
16:01 Wednesday 20th July 2022 - 7 minute read

Well people, we're down to the final two, finally! After what seems like forever, we finally know the two candidates, Rishi Sunak and Liz Truss, who will be put to a Conservative Party members public vote. The roughly 160,000 membership will now vote on which candidate they would prefer as the new leader of the Tories and by right, the de-facto Prime Minister. We have asked our go-to-guy for all things political, Adam Roberts, to detail the remaining process, timescales and the two hopefuls after the biggest of jobs.

Wednesday afternoon saw the 5th and final round of the ballot of Tory MP's and it was Penny Mordaunt who was the eliminated party having received the least number of votes. We are now down to the final two in the race to be the next Prime Minister of the UK and it will be one of Liz Truss or Rishi Sunak who will be the next leader of the United Kingdom.

The two will undergo a 3rd leadership debate on the BBC in the coming days.

What is the process for electing the leader?

The 1922 Committee, the backbench MP's responsible for the election rules, announced the new speedier process for the Tory Party leadership elections on Monday. So how does it work?

Candidate hopefuls needed a minimum of 20 backers to even enter the race, up from the usual eight. The first round vote was held on Wednesday where candidates needed to secure at least 30 MP votes, a figure that couldn't be reached by Jeremy Hunt(18) and Nadhim Zahawi (25).

Then we moved onto a series of run-off votes, beginning last Thursday afternoon, where the candidate with the fewest votes will be eliminated, until we are left with the final two. We were also be subjected to two televised debates on 17th July (ITV) and 19th July (Sky News). In the first run off ballot, we saw Suella Braverman exit, then in the second it was Tom Tugendhat and in the third it was Kemi Badenoch. Finally, Penny Mordaunt was eliminated in the final round.

The final two candidates are then put to a postal ballot between existing Conservative Party members. The winner is the person with the most votes and the result is expected to be announced by the 5th September.

Last night Rishi Sunak asked Liz Truss whether she regretted being a remainer or a Lib Dem more...

Today he's pulled out of the debates because *checks notes* he doesn't want it to look like the Tories are attacking each other? 😅 https://t.co/eXLz24xNI7

Who are the final two candidates?

If you had asked me a few years ago about Liz Truss becoming the next Prime Minister, I'd have made a discreet call to Broadmoor and had you shipped off. The former Secretary of State for International Trade burst onto the political scene with a very strange speech on pork markets and cheese, but since then has been promoted to the heady heights of Foreign Secretary and is seen by some as the next darling of the party. Truss campaigned passionately for Remain during the Brexit referendum but is now seen as a staunch Brexiteer by the likes of her backers, Nadine Dorries and Jacob Rees-Mogg.

Truss came right in in the betting shortly after defeated rival Suella Braverman pledged her support to the Truss campaign and she continued to pick up more votes from the floating voters after her rivals were eliminated, which pushed her past defeated Penny Mordaunt. In recent Tory polls, Truss has compared favourably in a potential run-off with Sunak, with 54% saying they would vote for her, compared to just 35% for the former Chancellor.

The former Chancellor of the Exchequer was once seen as the obvious replacement as Prime Minister. 'Dishy Rishi' was the party golden boy, heart-throb to the housewives, and cold-blooded stats man who was the steady hand to ensure the economy continued to recover post-pandemic. However, his sleek PR campaign started to show huge cracks and whether the general electorate will be able to find common ground with a former banker at Goldman Sachs, a hedge-fund owner and a man who is married to a woman richer than the queen is another question altogether. He has had a large hit to his popularity with the non-dom scandal relating to his wife and his role in the cost of living crisis.

Sunak has huge support amongst back benchers, but isn't seen as popular amongst Conservative Party members, or the general public for a potential general election. He has consistently polled below his rivals amongst Tory Party members.

Which ever of the candidates win, they will have a hard task overcoming Keir Starmer in the polls. 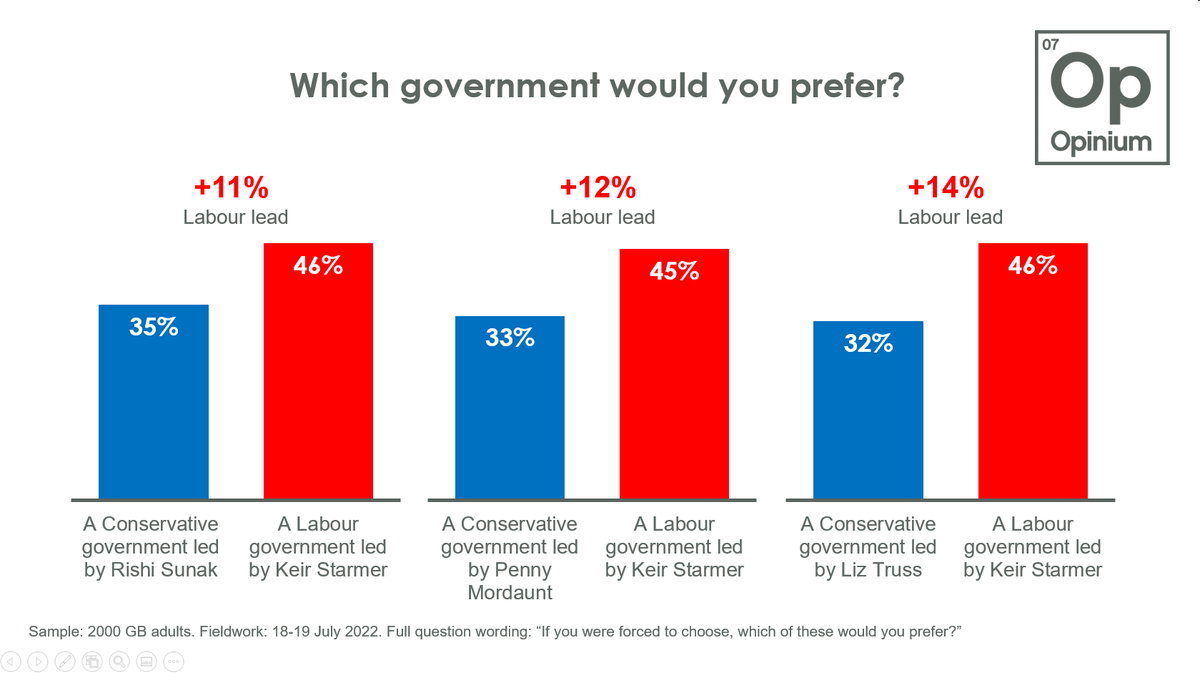 None of the #ConservativeLeadershipContest candidates have won over the public yet, with a Labour government under Keir Starmer...

Who has been eliminated?

Mordaunt is the current MP for Portsmouth North and the serving Minister of State for Trade Policy. The 49-year-old had emerged as a front runner to become the new Tory Party leader and her odds reflected that. Coming in from 40/1 last year to as short as 4/6 at some bookmakers at one point in the running. In a recent members poll she was favoured against any other running candidate, so if she had made the final two, her chances of winning would have improved massively. A staunch Brexiteer, she has made several controversial comments over the years, including a lie about Turkey joining the EU during the Brexit campaign and suggesting overseas aid would be better spent on a replacement for the Royal Yacht Britannia. Some have compared her to Boris Johnson in a wig. Nice...

Mordaunt struggled to keep momentum and failed to pick up the votes from here eliminated rivals, effectively handing the 2nd running position to Liz Truss.

Badenoch was born in the UK but spent most of her youth in Africa and the USA. The 42-year-old is another hard-line Brexiteer and had been running on an anti-woke platform, waging various culture wars along the way. A favourite amongst certain back-benchers including Michael Gove. Her odds shortened throughout since announcing to run, but she just couldn't muster enough support amongst back benchers.

An ex-military man, Tugendhat is the MP for Tonbridge and Malling and the current Chair of the Foreign Affairs Select Committee. The 49-year-old has only been a sitting politician since 2015 and voted to stay in the EU during the Brexit referendum a year later, something that may have come back to bite him in his hunt for the top Tory job.

When asked what the naughtiest thing he had ever done was, he replied: "Invade a country". He was awarded a MBE back in 2010 for his military service.

Braverman was the first to announce her candidacy and has served as the attorney-general throughout Boris Johnson's premiership. A firm right-winger (aren't they all?) , she had pledged to rip the Northern Ireland protocol up and leave the ECHR. She is another who was running on an anti-woke platform and although she had no chance, she will have improved her chances of a bigger job in the future.