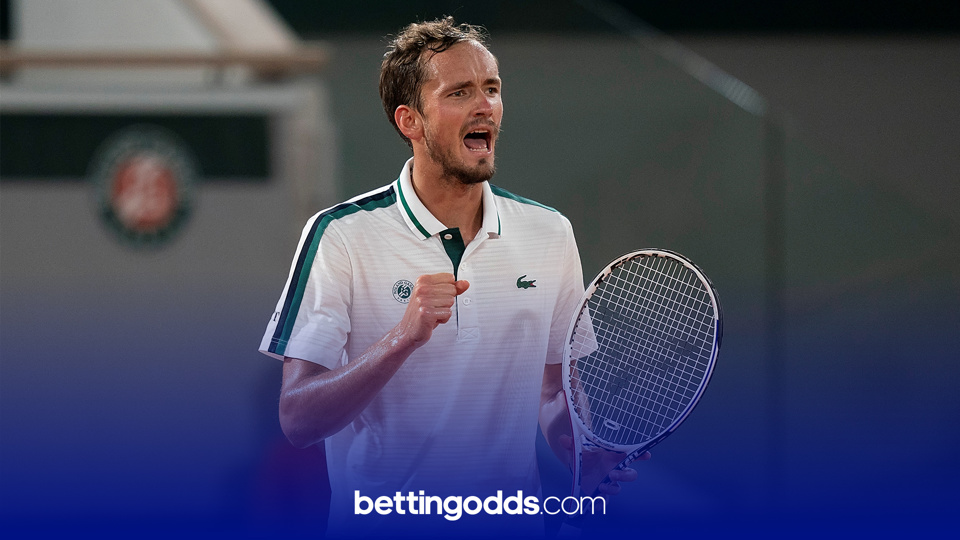 The Olympics was another tournament that was massively affected by the COVID-19 outbreak but luckily it will be going ahead in around a week's time in Tokyo. This year’s lineup for the tennis tournament boasts some of the best names in the business and as he always is, Novak Djokovic is a massive favourite according to the bookmakers.

The Serbian has never really performed very well at the Olympics, only ever winning the bronze medal in 2008, exiting in the semi finals in 2012 and a first round defeat in 2016. Considering this and the amount of tennis he’s played recently, I think the value is elsewhere.

Daniil Medvedev has cemented himself as one of the best tennis players in the world in the past two years. He’s currently ranked at number two in the ATP rankings which he has held since March this year. He surprised many recently with his performance at the French Open where he reached the quarter finals and got knocked out by Stefanos Tsitsipas; considering he is normally a hard court player, his efforts on clay and grass have certainly been impressive. The Tokyo Olympics will be a hard court tournament which only makes the 10/3 price for the Russian even more attractive.

As you can see, hard court is where Daniil shines and he’s said it himself that it’s his favourite surface. Not only this but Daniil has beaten the likes of Tsitsipas, Rublev, Zverev and Berrettini this year and also won three hard court trophies this season, he also reached the final of the Australian Open where he unfortunately just fell short as Djokovic beat him in straight sets. However I wouldn’t let this defeat to Novak put you off betting on Medvedev as he has actually won three of the last five meetings they’ve had.

One of Medvedev’s best achievements on the hard court came at the end of last year where he won every game at the ATP World Tour Finals and lifted the trophy. In the five games he played he beat Zverev, Djokovic, Schwartzman, Nadal and Thiem all in a row. This should show you how capable he is on the surface and just as a player in general. He’s currently got the fourth best winning percentage over players in the top 10 who are currently active, only being beaten by Djokovic, Federer, Nadal and Murray.

Admittedly it’s really hard to look past Djokovic. I’m not saying I don’t think he’s got a chance of winning it, he’s rightfully the favourite. But when it comes to betting on an outright market for the Olympics, Novak represents odds of 8/13 which I don’t think is worth it at all.

He’s clearly in the form of his life at the moment and the only thing missing on his CV is the Olympic Gold, this could be his last chance to get it but in his last three attempts he hasn’t really even come close. His last attempt saw him get knocked out in the first round and his one before that saw him finish in fourth place. There’s plenty of players in the tournament that will give him a scare such as Zverev, Tsitsipas and even Rublev if he returns to his hard court form.

There’s only one player left to talk about and it’s Andy Murray! Now I wouldn’t be rushing to back Andy but he’s won the last two Olympic Gold medals for tennis and has done so in quite emphatic fashion. He’s no stranger to playing the likes of Novak but the current Murray we see is quite a different one to the former world number 1.

If you want to back him for Gold medal glory, he’s currently priced at 50/1 and to say it would be absolute scenes is an understatement. Who knows, maybe Murray has got one last spark left in him, after all the last tournament he won was the Antwerp Open in 2019 which was a remarkable comeback in itself. That tournament was also on the hard court and if he can produce that quality again, he could go a lot further than many expect!

Wimbledon Betting Tips for Day 4 at Wimbledon as BettingOdds.com picks out their Best Bets for Thursday's Play…

Wimbledon Betting Tips for Day 3 at Wimbledon as BettingOdds.com picks out their Best Bets for Wednesday's Play…

Wimbledon Betting Tips for Day 2 at Wimbledon as BettingOdds.com picks out their Best Bets for Tuesday's Play…

Wimbledon Betting Tips for Day 1 at Wimbledon as BettingOdds.com picks out their Best Bets for Monday's Play at…

Wimbledon Odds for the Women's side of the draw as BettingOdds.com provide their Betting Tips and Best Bets for…

Wimbledon Odds for the Men's side of the draw as BettingOdds.com provide their Betting Tips and Best Bets for…

French Open 2022 Betting Odds as BettingOdds.com preview the 2022 edition of the tennis from Rolland Garros where…