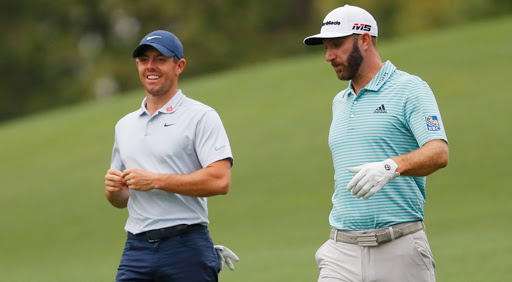 Golf is back!! Well, sort of. Fans and punters have been making do with virtual tournaments for their golf betting 'fix' since the last ball was struck in anger during the first round of The Players Championship at Sawgrass on March 12th.

Changes are afoot, though. The UK government have named golf as one of the sporting activities that will be allowed under the new 'Stay Alert' approach to tackling COVID-19, which could see the possibility of some golf courses open across England, whilst we also have some 'real' golf to look forward to on television.

Rory McIlroy and Dustin Johnson are teaming up for a charity skins match this Sunday in Florida, and it's got us golf fans sitting up in our chairs and licking our lips at the prospect of some REAL golf.

In the absence of regular golf tour events there have been a series of virtual events across the various tours, and whilst some online bookmakers have offered prices, it has certainly not been a case as business as usual for those who like a bet on the golf.

World number one McIlroy and past incumbent Johnson broke the news via an interview on the Today Show on NBC in America, announcing that their #DrivingRelief 'skins' match will raise money for COVID-19 relief.

The pair team up to face American duo Rickie Fowler and Matthew Wolfe who have immediately been priced up as the underdogs for the match, which will take place at the stunning Seminole Golf Club in Florida on Sunday 17th May.

The bookmakers give McIlroy and Johnson a 69% chance of winning, but although it's great to have some live golf on our screens (NBC & Sky Sports will be screening the event live), it's not something you'd be racing to have a bet on.

In last Monday's interview, McIlroy claimed to have not picked up a club in 7 weeks, whilst Dustin Johnson tweeted "First day back..." in a video of him getting the driver out on Twitter.

Rickie Fowler and Matthew Wolff have been priced up as the 7/4 underdogs for the clash. Upon the announcement, Fowler took to social media to say "we are synced up and ready to roll to benefit COVID-19 relief efforts!!".

The pair are buddies and both Oklahoma State alumni and although Matthew Wolff has the lowest profile of the four competitors, he does have a PGA Tour title to his name, winning the 3M Open last July.

Fresh out of college just over a year ago, Wolff told NBC the prospect of playing two world number ones was "pretty intimidating but anyone can beat anyone on any given day".

(Odds correct at time of publication - subject to change)

If you're unfamiliar with the term 'skins' in golf, it is a type of match where money, or 'some skin' can be won on every hole.

Each hole will have a set prize and whichever team win the hole take the money. Each player plays his own ball with the lowest score of the four winning the hole.

With the figures on offer, the chosen charities are set for a real windfall and whilst golf fans and punters will be pleased to just have some live golf to get stuck into, it's the raising of money for these charitable causes which is the big winner.

Dutch Open 2022 Betting Tips as BettingOdds.com preview the event and offer up Odds for the Field of Players who…