Masters Betting: The Tiger Double, could history repeat itself?

2019 saw two remarkable sporting achievements with Tiger Roll winning the Grand National and Tiger Woods winning the US Masters. These two memorable moments happened within just a week of each other with the double paying from 60/1 to 80/1 with bookmakers. Our man @AnthonyEadson looks back on one of his greatest punting moments and looks at the chances of history repeating itself again?

Spring is often my favourite time in the calendar when it comes to sport. One of the traditions over the years in the BettingOdds.com office has been to have a little punt on the winner for both the Grand National and US Masters which tend to fall within a week of each other around Easter.

Each-way returns are often the best that can be hoped for with both events being incredibly tricky to predict with 40 horses in the race and often a field of over 90 golfers.

For me, my thoughts towards backing the Tiger Roll and Tiger Woods double came when after watching Tiger Roll run his rivals into submission at the Cheltenham Festival in March 2019, where he won for a fourth time. I may not have seen much of that race due to being intoxicated in a beer tent, but I do remember the roar as he powered up the famous hill to the finish. However upon watching the replays hungover, I was more than confident that I wanted him on-side to win the following months Grand National after seeing his 22 length victory.

Could Tiger Roll really become the first horse since Red Rum to win back-to-back Grand Nationals? You bet he could, the pocket rocket kept his nose clean once again at Aintree over those fences that he relishes. A stunning performance off top weight, where with a lap to go you just knew from the way he was travelling that the 10-year-old was pulling it out the bag once again.

For me as a casual horse racing fan, to see a horse like that is special, they stand out and they capture the imagination of the public. What Tiger Roll and Davy Russell did that day will live long in the memory. As they crossed the line, thoughts came back to the £20 I had placed on the double, over to you Tiger Woods.

Watching golf isn’t for everyone, but as a player myself as a kid, one of my sporting idols had been Tiger Woods and to see this man back tearing up the golf course, draining monster putts was something that can make men feel twitches from the groin area.

Going into the Sunday at the Masters, Tiger Woods was in contention, he wasn’t leading but he was there, and that was all that mattered to me. The big cat had been there before, this was where the big cat pounced, on the back nine on the final day, could this be happening? Onto the final few holes and I’d decided to switch my phone off with many friends asking if I’d cashed out or how I was feeling. Sack that, I didn’t want anyone interrupting this compelling viewing.

At the 16th tee, Tiger led the Masters by one and was prepped for one of the most famous holes in golf. Boom, one of the best approach shots you will ever see, feeding it off the right side of the sloped green, the ball crept down towards the hole, stopping just three feet past the pin to give Tiger another birdie. As that shot came in, a wave of excitement came over me as I leapt from the sofa, shouting in delight as I knew we were almost there.

Draining the putt on the final hole, I smiled and remembered why I love this sport and what it can bring to both players and fans. The crowd were chanting ‘Tiger, Tiger, Tiger’, and as he punched the air and embraced his mother, son and daughter, the hairs on my arm stood up. This was special, the world was gripped, and Tiger’s children were now seeing the greatness of their Dad’s talents live in the flesh before them. The euphoria of those scenes are something we may never see again on a golf course, Tiger’s emotion, the chanting, the hug with his children, enough to bring a tear to any eye.

The double had landed which I’d backed four times with £5 free bets, at 60/1, 66/1 and 74/1 (x2) winning north of £1300. Looking back I’d known that both Tiger’s had the opportunity to make history and I think it was my heart rather than my head that led me to the bet. We all want to see major stories in sport and I’ll always remember this one. 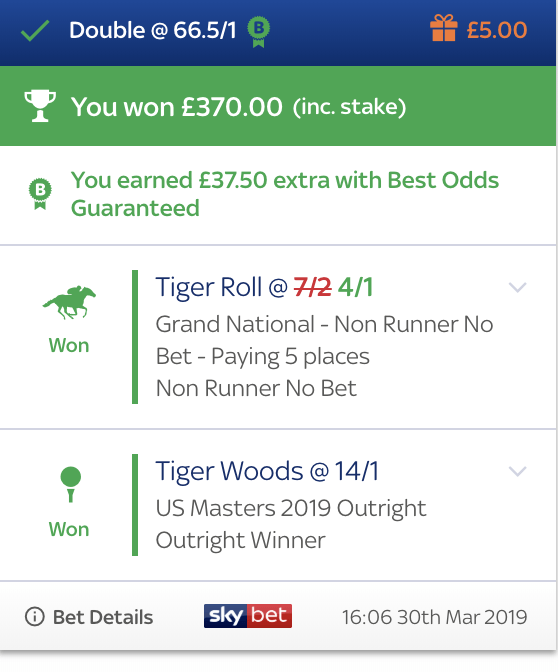 Will history repeat itself?

That’s enough about me and my stories and getting emotional over Tiger Woods, I’m sure what you really want to know is will this happen again this year? Well, things are a little different for starters, due to the small issue of a global pandemic that has caused chaos in 2020.

The Grand National was cancelled back in April in the midst of the first lockdown and the 2021 running will take place as normal in April next Spring.

The Masters which also normally takes place around Easter, is being played in November this year and kicks-off on Thursday. Going into last season’s most coveted tournament in Golf, Tiger Woods was priced at 14/1 to claim the green jacket. Fast forward 18 months and the 44-year-old is now a 40/1 shot in the Masters Winner Market with most firms to claim his sixth win in the Masters.

One of the major reasons for this difference is price, is Tiger’s form going into the event. In the four events he had played going into 2019’s renewal, Tiger had finished, 8th, 30th,10th,15th. Compare that to this season and his most recent four finishes are, 72nd, MC, 51st, 58th.

From the recent winners at the Masters we have seen that you need to come into this event in-form. In the last six years, no winner has missed a cut in their four proceeding starts. Of those six winners all of them had won or had two top-10 finishes that season. I don’t see Tiger challenging this year, although he is the last player to win back-to-back renewals (2001, 2002), and it would be fantastic to see him play some of his best golf again.

Gordan Elliott and Tiger Roll have formed one of the most memorable partnerships in horse racing over recent years. After winning the 2019 Cross-Country Chase at the Cheltenham Festival, Tiger Roll was sent off the 4/1 favourite for the 2019 Grand National.

In 2020 though the Tiger was beaten at the Festival in that same race and many questioned whether it would be too big an ask for him to challenge at Aintree the following month. With this year's renewal being cancelled due to Covid-19, Tiger Roll will now have to wait until Spring 2021 to try and emulate Red Rum and win the race three times.

Time and age is not on the Tiger’s side though I’m afraid. Sired by Authourized, Tiger Roll won the National as both an eight and nine-year-old. By the time of next year's race, Gordon Elliott’s superstar will be eleven and the stats for horses that age running in the National do not make good reading.

Of the last 25 winners of the race, only four have been aged eleven. Another factor to consider is the likelihood of Tiger Roll having to carry top-weight in the race based on his previous achievements. This is something he did last year, but the Tiger is not getting any younger and has been beaten in three races since his 2019 triumph, albeit two of those races were not at his preferred distance.

At 14/1, Tiger Roll could well shorten in the market for the Grand National, should he put in a good performance in the Cross Country Handicap Chase at Cheltenham this Friday. The 10-year-old faces a stiff test against Easysland who beat the Tiger by 17 lengths over the same circuit in March.

At the time of writing the current best price with the bookmakers on Tiger Woods to win the US Masters and Tiger Roll to win next year’s Grand National, is a whopping 532/1 with Paddy Power which can be added straight to your betslip here. Punters can back that price each-way with eight places being offered on the Masters and five places being offered on the Grand National.

Personally I can’t see history repeating itself, however there have been valuable lessons in how to never write off the greats in sport, and how to always use your free bets wisely!