Five ways Michael Duff can keep Cheltenham in League One

If Michael Duff keeps Cheltenham in League One, he would be elevating himself into the conversation for the club’s greatest manager of all time.

Arch Anderson and Dennis Allen led the Robins to the Southern League Premier Division (what is now effectively the National League) in 1964 and 1977 respectively, with the latter repeating the trick in 1985, plus Bob Etheridge guided the club to fourth place in the fifth tier in 1968.

Steve Cotterill has a special place in the hearts of fans for what he did in the late 1990s and early 2000s, leading the club to three promotions and an FA Trophy victory in six seasons.

John Ward also steered the club to promotion to League One via the Play-Offs in 2005-06 – and is there even an argument to say Mark Yates, having inspired the club to successive Play-Off campaigns, would have kept the team up in 2014-15?

Perhaps, but the decision to dismiss Yates and Gary Johnson – who got the club back in the league at the first attempt in 2015-16 – held a similar level of merit, but may be coloured retrospectively by the subsequent choice of manager in either case.

Cotterill is king for Cotswoldians because of the ground-breaking nature of his achievements, but Duff is closing in fast: not that, grounded as he is, the Northern Irishman would pay much attention.

If Duff can begin to establish Cheltenham at this level, his name would be further entrenched in Robins folklore – but the first priority is mere survival. How will it be done?

Losing Ben Tozer to Wrexham late in the transfer window was an enormous blow.

Not just because of the defender’s long throw, which accounted for so much of the Robins’ overall goal threat last season, not just because of his outstanding leadership qualities, or even his ability as an individual defender.

It should not be forgotten that Tozer came to Cheltenham as a midfielder and Duff’s initial long-term plan was a 4-4-2, something he’d used at Burnley’s Under-23s to prepare the players for Sean Dyche’s system.

The back-four, though, did not work – the Robins were initially 10 games winless under their new boss - and, for a midweek EFL Trophy hosting of Arsenal, the head coach opted for a 3-5-2 with Tozer in the middle of the back-three.

The former Newport defender stayed there for the encouraging 2-2 draw with Mansfield, in which the team was unlucky not to beat what were at the time serious promotion contenders, then for the 3-0 win at Notts County that sparked the Duff era into life.

Cheltenham came up with a defensive trio of Charlie Raglan, Tozer and Will Boyle, who had played together regularly since February 2019 and the understanding they had forged – in terms of communication and positioning – could have given the team a huge advantage in an aspect of the team that is not dictated by budget.

Alas, finances spoke for Tozer, who was happy to drop two divisions to play for Wrexham, while Raglan has been affected by injury.

For that reason, Will Boyle has had to step up as a central figure in the defence, literally and metaphorical.

In fairness to the former Huddersfield youngster, he was outstanding in the 1-1 draw with MK Dons and deservedly won the man-of-the-match award, but there is extra responsibility on him now and there may be games in which he has to carry the defence.

Boyle was flanked by Sean Long, a right-back by trade and Lewis Freestone, a left-back; Long and Freestone are technically capable which could help Cheltenham’s build-up play from deep, but there could be problems.

While Cheltenham were solid for much of the second half against MK Dons, many of the chances their opponents had were big ones, which suggests that once opponents can break through the well-drilled midfield structure, there is an underlying vulnerability.

"We think it's a bit of a coup to get him" - Cheltenham Town manager Michael Duff on loan striker from Swansea City Kyle Joseph, who makes his debut against MK Dons this afternoon #ctfc https://t.co/2zhC3uVzyP

2. Impart his wisdom on Pollock

He got a baptism of fire on his professional debut at Grimsby, at just 17: a more senior centre-back, Alex Whitmore, had been sent off at Exeter in December 2018 early in the second half and it was a case of holding the opposition at bay for 40 minutes.

The Mariners ultimately won 2-1, thanks partly to some incredibly defiant last-ditch defending from Pollock and, having had that experience, it is hard to see anything fazing the teenager.

Pollock was briefly one of the first names on the teamsheet under Michael Jolley, before playing less – partly due to injury, partly falling out of favour under Ian Holloway and Paul Hurst - moving this summer to Watford.

Nonetheless, the son of former Man City midfielder Jamie Pollock remains hugely talented and could earn himself Championship football in 2022-23 – be that with Watford or out on loan – if he stars at Whaddon Road (Jonny-Rocks Stadium) this term.

Having been a former centre-back himself, Duff can play a huge part in the development of Pollock, who could be an option to take up Tozer’s old role.

The Surrey born centre-back will not have Tozer’s experience, leadership qualities or long throw threat, but he should have at least equal ball-playing ability and is simply a fearless, born defender who loves the basics.

Once Pollock has acclimatised to the level with a run of games, he should be ready to take some of the pressure off Boyle – who may revert to the left of the trio - in terms of holding the rear-guard together. 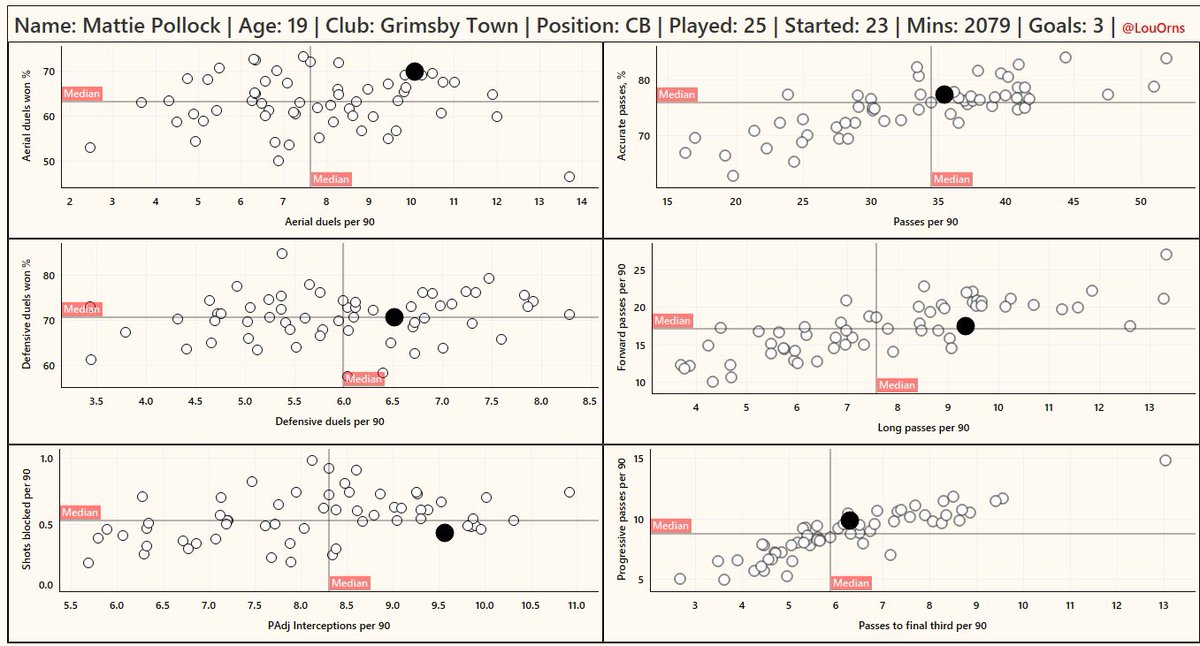 Mattie Pollock dash. From watching him and looking at him analytically. We've got a younger Sierralta on our hands 👀 https://t.co/vgTkigibJk

If Boyle is playing on the left of the three, that will broaden Cheltenham’s squad in some respects, because it enables Duff to use Lewis Freestone’s versatility.

Having defender playing on their natural side is especially important in terms of those operating wide in a back-three, because they – rather than the corresponding full-back or wing-back – will be relied upon to play vertical passes down the flank.

Freestone is capable of standing in for Boyle if the long-serving defender gets injured or suspended but, having come through the ranks at Peterborough at left-back, can also be a left wing-back.

Chris Hussey is the go-to player in that position, having made 102 appearances since Duff took charge in September 2018, with the former Bury technician renowned for his pin-point deliveries.

Hussey is a fit professional and he can try to combat that by closing down potential threats quickly, denying them the space to get ahead of steam, like he did to Peter Kioso on Saturday.

Once he is in a footrace, though, he can become a potential liability – through no real fault of his own.

There may be some games in which Duff can bring in the pace and energy of Freestone to counter wide threats, thus keeping Hussey fresh for other games.

4. Don’t give Blair too much labour

Though Hussey’s minutes may need to be managed at certain points this season, the former AFC Wimbledon academy graduate produced a steady display in the previous game: it was his fellow wing-back who endured more difficulty.

Matty Blair was turned inside out at will by opposing wing-back Daniel Harvie and it was clear that most of the big chances Cheltenham conceded came about from issues on his side of the pitch.

Part of the problem is that because Blair struggled, he gained a lot of cover from his teammates which allowed the opposition to find gaps further across.

Blair is an extremely driven character with plenty more to give to Cheltenham in their battle to beat the drop but he, like Hussey, is 32.

With wing-backs at that age, it is very difficult to sustain any pressure high up the pitch in those wide areas and keep the formation as a 3-5-2, rather than a 5-3-2.

Nine of the other 12 players that started as a wing-back in League One on Saturday were under the age of 27, while Accrington Stanley’s Sean McConville is the only one who isn’t younger than Blair and Hussey.

Keeping them fresh will be essential. Part of the reason why Cheltenham caved in towards the end of the draw with MK Dons, as well as perhaps fitness issues in the wing-back positions, was not having two up top.

Michael Duff started with Kyle Joseph, on loan from Swansea, paired with Alfie May in attack, which worked brilliantly in the first 25 minutes of the game.

Joseph, a Scotland Under-21s international, has an excellent spring on him and won numerous flick-ons while Alfie May harried opponents with his usual persistence, which was a key part of why Cheltenham started so well – and Joseph deserved his goal.

As the forwards tired, though, the Robins found themselves short on alternative options, evidence by the fact midfielder by trade Taylor Perry replaced a striker in the second half 21 minutes before Andy Williams did.

The switch to a 5-4-1 meant too much was demanded of the remaining striker – Joseph then Williams – who had to graft in isolation, thus the opposition could have the ball in the middle third without being challenged.

Kyle Vassell, though, is strong enough to hold off opponents and mobile enough offer a transitional threat, whilst bringing some Championship experience and, when back fit, will be a fantastic addition to the squad, while big things are hoped for from Stoke loanee Christian Norton, also injured.

With that in mind, Cheltenham have done well to get through a game against a strong side light in a key area and still have a point to show for it: but switching the strikers up in-game could help them beat the drop.