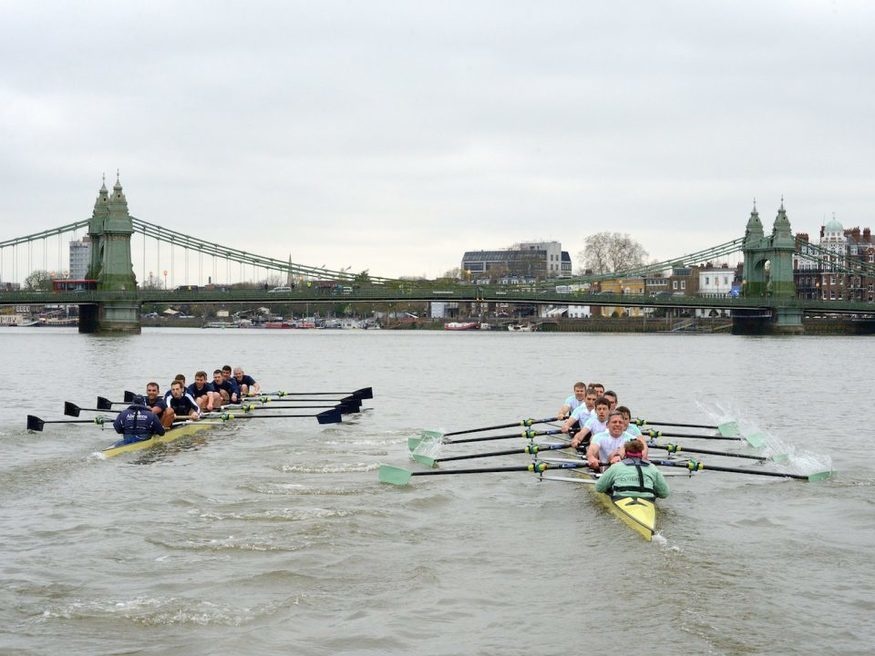 Come on you… Blues? It’s time to align yourself with either Cambridge or Oxford University as the 167th Men’s Boat Race steers its way onto the calendar this Sunday 3 April: eight strapping young chaps versus eight more robust rowers, representing either the light blue of CUBC or the dark blue of OUBC on behalf of the two most ancient universities in England, row like their lives depend on it down the 4.2-mile (6.8 km) stretch of the Thames in West London, from Putney to Mortlake. It is a return to the full course on the river in 2022 after 2021 saw the competition moved to a 3-mile (5 km) stretch of the River Great Ouse. It is estimated that for every stroke taken in The Boat Race, the crews will have rowed 600 in practice. Phw-oar.

The most English of English sporting traditions, that couldn’t be more English even if an apology was going up against a cup of tea in a queuing stand-off, the men's race was first held in 1829 and has been held annually since 1856. The recent bragging rights in the past ten races (there was no event in 2020 for the obvious reason) don’t have a particularly stentorian vocality; each have emerged victorious five times apiece, with Cambridge winning the last three in a row. It is also CUBC who have the course record – 16 mins 19 seconds set in 1998 - and the most consecutive victories; 13 between 1924 and 1936.

Each racing ‘shell’ that the competitors row in is 18.9 metres (62 feet) long, and with the largest win margin set all the way back in the 3rd Boat Race in 1839 from Cambridge winning at an impressive 35 lengths, that amounted to the equivalent of 2170ft, or just under half a mile ahead of a poor, poor Oxford unit. However, though CUBC may have the bold font in the record books, moving on to exactly where it rightly matters, Oxford are favourites for this year’s battle of the boats, standing odds on at 2/5 with William Hill.

A dead heat, when there’s no separating them at the finish line, has only occurred once in The Boat Race’s near two hundred year history, and in 1877, and it’s a bit snide of Hills to offer this happening again in ‘22 at 100/1. We’re also well overdue for a sinkage, the last in 1984 after the Cambridge boat collided with a barge.

But ultimately the question is, which Winkelvi-wannabees will win? Will Cambridge extend their record 85 titles, or will Oxford close the gap by increasing their own respectable 80? The latter may be considered this year to be the more oar-some, but if you like the cut of CU’s jib, you can find Cambridge at 19/10 in the market.

You can cheer as either one of the quarter of a million lining the banks of the River Thames or from the comfort of your own home (BBC One, from 13:50 GMT). While the men’s event is due to begin at 15:23 (GMT), the 76th Women’s Race is scheduled for exactly earlier, with Cambridge hoping to extend their overall victory record from 45 times to Oxford’s 30.