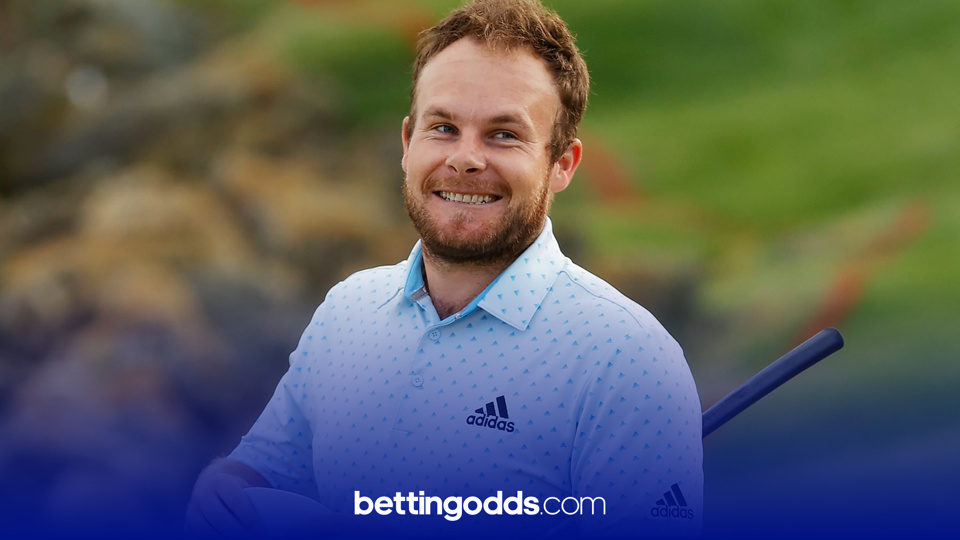 Our golf tipster Russell Palmer is back this week with another three golf tips on the European Tour with the BMW PGA Championship...

Long time followers of golf will be licking their lips this week looking forward to getting a peak at Wentworth in the Autumn. The West Course hosts this week's BMW PGA Championship, moved from its original May spot in the schedule, but a familiar setting for the old World Matchplay which was played around this track every year attracting the world's best players.

Outside of the Open Championship, the BMW PGA is the Blue Riband of the European Tour calendar and as a result has attracted a strong field. The betting is by Patrick Reed who makes the trip over from America where he last finished 13th in the US Open three weeks ago.

Joining Reed at around the 10/1 mark is Tommy Fleetwood, who lost out in a play-off to Aaron Rai at a very wet Scottish Open on Sunday, his best finish of the season.

My Scottish picks all went into the final round in the top 15 but it was a familiar story with them collectively failing to fire on Sunday. Andy Sullivan seemed best place but dropped to 26th with a +4 final round, whilst Gavin Green finished 42nd and Benjamin Hebert 19th, which was a decent effort for a 66/1 shot.

We dust ourselves off though and go again here for a tournament I'm really looking forward to.

Watch: Thursday from 11.30am on Sky Sports Golf

First up this week I really like the look of Tyrrell Hatton to have a big week back on English soil for the first time since the Tour restarted.

The Englishman has been active on the PGA Tour and shown some fine form, finishing 3rd and 4th at the RBC Heritage and Rocket Mortgage Classic earlier in the summer, he'd also finish 7th in the Tour Championship in what bookended a season that saw his first victory Stateside when landing the Arnold Palmer Invitational before COVID.

He missed the cut at the US Open last time out but comes here fresh on a course where he finished 7th in 2016.

What I like most about him are his season stats, which saw him finish 38th for greens in regulation percentage last season (the 2020 season ended with the Tour Championship four weeks ago on the PGA Tour), a metric I'm keen to look at this week on some tricky greens at Wentworth. The tree lined fairways are very prominent here so I'm also looking at driving accuracy where Hatton ranked 78th on the PGA Tour, where his shots gained approaching the green he was 13th.

At 16/1 he represents a bit of each-way value and is the third highest ranked player in the world in this field, with Paddy Power paying eight places.

Second up is a player who like a lot at the stats this week and looks a very tasty price each-way at 66/1 with Bet365 paying six places.

Jordan Smith ranks 1st for greens in regulation on the European Tour this season and also backs that up with a top 20 rankings for driving accuracy (16th) and shots gained off the tee (20th).

The Englishman has two top ten finishes this season, most recently at the Irish Open where he finished in a tie for 7th. He's been very consistent missing two cuts from his ten starts since lockdown, and one of those was a withdrawal in Andalusia.

At 66/1 he represents a bit of value on a course where he finished in the top 25 last season.

My last pick this week is the one and only Gavin Green who it feels like I'm putting up most weeks.

The Malaysian is a winner in waiting, a good ball striker he ranks 10th in driving accuracy and 9th for greens in regulation this season on the European Tour, but can also putt well where he's ranked 8th for shots gained.

He has five top 15 finishes from ten starts, including two top-10s this season and fell away with a final round 75 on Sunday in Scotland to cost him another one. He's missed just the one cut and if he can just piece it all together for four rounds he could feature here at a big price of 80/1 with 888Sport this week.

A solid but unspectacular two visits to Wentworth before (72, 52), I'm hoping for a big leap this week and get us in the hunt.

Three golf betting tips for the RBC Heritage on the PGA Tour.

Three against the field in this week's Kenya Open

Three to back at the Players Championship

Back Moliwood to go deep at the Arnold Palmer

Three against the field in the WGC-Workday

£20 Risk Free First Bet Money Back In Cash
#AD New customers only. Place your FIRST bet on any sportsbook market and if it loses we will refund your stake in CASH. Max refund for this offer is €/£20. T&Cs apply. 18+ begambleaware.org
Bet £10 Get £40 in Free Bets
#AD 18+. Play Safe. New customers using promo code M40 only. 1x per customer. Min £/€10 bet. Min odds 1/2 (1.5). Free bets of 2 x £/€15 issued after first qualifying bet settles. Max £/€10 Bonus. 35x wagering requirement. Max redeemable bonus: £25. Casino bonus expires after 72 hours. UK & Eire only. Additional T&Cs, including free-bet, game, location, payment method and stake contributions apply. begambleaware.org.
Welcome Offer
#AD Open Account Offer. Up to £100 in Bet Credits for new customers at bet365. Min deposit £5. Bet Credits available for use upon settlement of bets to value of qualifying deposit. Min odds, bet and payment method exclusions apply. Returns exclude Bet Credits stake. Time limits and T&Cs apply. The bonus code ‘100BET365’ can be used during registration, but does not change the offer amount in any way. 18+ begambleaware.org.
Bet £10 Get £30 Free Bets + £10 Casino Bonus
#AD Minimum deposit of £10 using deposit code 30F - A qualifying bet is a ‘real money’ stake of at least £10 placed on any sports market - Minimum odds of 1/2 (1.5) - Free bets credited upon qualifying bet settlement and expire after 7 days - Free bet stakes not included in returns - Casino Bonus must be claimed within 7 days • To withdraw bonus/related wins, wager bonus amount x40 within 14 days • Wagering req. vary by game • Withdrawal restrictions and Full T&C’s apply. 18+ begambleaware.org
Bet £10 Get £30 + 60 Free Spins
#AD New UK & NI customers only. Promo code SPORTS60. Deposit and place first sports bet of £10+ in one transaction, at odds of Evens (2.0)+, settled within 60 days. First bet must be on Sports. £30 in Free Bets credited within 48 hours of bet settlement. 7-day expiry. Payment restrictions apply. SMS validation may be required. Max 60 Free Spins on Justice League Comics. 7-day expiry.  Full T&Cs apply. 18+ begambleaware.org
Bet £10 Get £20 In Free Bets
#AD New members. £10 min deposit & bet on sportsbook, placed & settled at 1.5 min odds within 14 days of sign-up. Win part of E/W bets. 2 non-withdrawable £10 Free Bet Tokens: accept in 7 days, valid for 7 days from acceptance (ex. E/Ws & Multiples), stakes not returned. Click here for Rules & Exclusions. Bet Responsibly. BeGambleAware.org. 18+
Up To £100 In Free Bets
New customer offer. Place 5 x €/£10 or more bets to receive €/£20 in free bets. Repeat up to 5 times to receive maximum €/£100 bonus. Min odds 1/2 (1.5). Exchange bets excluded. T&C's apply, 18+ begambleaware.org
Bet £10 Get £40 In Bonuses
#AD 18+ new customers only. Deposit, opt-in and place a £10 qualifying bet at odds of 2.00 or greater within 7 days of opening a new account; excludes cashed out bets. Receive 3x £10 Sports Free Bets, valid on set events only at odds 2.00 or greater. Plus, a £10 Game Show Bonus, selected games, wager 40x to withdraw a max of £250. Bonuses expire in 7 days. T&Cs Apply, see below. Please Gamble Responsibly. 18+ begambleaware.org
Bet £10 Get £20 In Free Bets
#AD Min stake £10. Min odds 1/2 (1.5). First bet only. Free bets expire in 7 days. Cashed out bets won’t apply. Payment method restrictions. Online UK customers only. 30 days to qualify for £20 in Free Bets. 18+. T&Cs apply
Money back As A Bonus Up To £40 If Your First Racing Bet Loses + £10 Casino
New customers only. 18+, BeGambleAware.org. Min deposit £10. Money back as bonus. Wagering requirements: Racing 3x at min. odds of 1.40 (2/5), Casino 35x. Only one bonus can be used at a time, Racing bonus must be wagered before using the Casino, unless the bonus has been forfeited. Bonus will expire after 7 days of opt-in. #ad
Bet £10 Get £5 Or 50% Losses Back Up To £25
To activate your Sportsbook 50% Back Welcome Offer, simply deposit and bet on any Sportsbook markets of your choice at odds of evens (2.00) or greater. If your account has Sportsbook losses at the end of your first day's betting (23:59), we'll refund 50% of your first day's losses as a Free Bet up to £25 (Minimum 3 bets required). If your account is up, you're guaranteed a £5 Free Bet provided you place at least 1 bet of £10 or greater at minimum odds evens or greater. T&Cs apply. 18+ begambleaware.org
Advert Disclaimer
Bettingodds.com is a free online resource which endeavour to provide helpful and useful content and odds comparison to its visitors. Please be advised that Bettingodds.com accepts affiliate commission from the companies appearing on the site, and agreed commission levels impact the location and order in which the companies (and/or their products) are presented on the website. Any ratings that appear on this site is determined by our subjective opinion of the brand but also based on market share and reputation, each brand's conversion rates, commission paid to us and general consumer interest. Company listings on this page don't imply our endorsement. We do not feature all providers on the market. Except as expressly set forth in our terms and conditions, all statements and warranties regarding the information presented on this page are disclaimed. The information, including odds, which appear on this site is subject to change at any time.
HOME
FREE BETS
FOOTBALL TIPS
LIVE SCORES