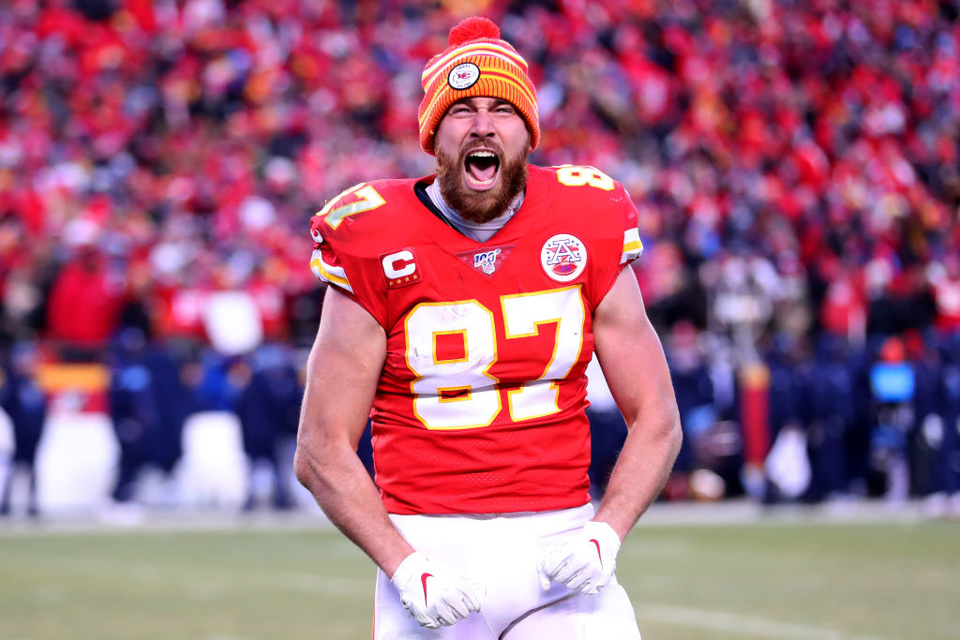 Travis Kelce was the man last week and can be the man again this Sunday night
By Neil Monnery
17:50 Sunday 23rd January 2022 - 4 minute read

Sitting at his desk this Sunday morning, our man Neil Monnery is joined by his ever present cat but also by the glow of tipping up the underdog 49ers to win straight up in Lambeau in his preview for Saturday’s late game. He loves picking the lesser favoured team but in Sunday’s late one, the two teams are very evenly matched and some would even question who the real underdog is. This might be one where the Prop Bets are the value and once more he likes #87 to shine...

The final game of the weekend comes from Kansas City, Missouri as the Chiefs welcome in the Buffalo Bills for a rematch of last season’s AFC Championship Game. That day Patrick Mahomes threw for over 300 yards and three scores to help his team back to the Super Bowl. This year they meet one round earlier but will the result be any different?

That game a year ago saw Mahomes rely on his two big time receivers. Tyreek Hill went for 172 on nine receptions whilst Travis Kelce snagged 13 catches for 118 yards and a score. I’m not one for going against history. Last week I tipped up the Tight End to go for over 100 yards and a TD at 10/3 and it came in. That same bet is 7/2 on Sunday night and without beating around the bush, I’m happy to go to that well once more.

A week ago I also put up Patrick Mahomes to score 2+ TDs in each half at 10/1. It came in but the bookies noticed. The same bet this week is 9/2 (although boosted at PaddyPower to 11/2) but that is too short for me to put it up again with confidence.

So one paragraph in after the intro and I’m already one bet down and have dismissed a second.

Back to the game in hand, a week ago I’d be incredibly bullish on Kansas City’s chances. That was before I saw just how impressive Buffalo looked in their dismantling of the New England Patriots. Josh Allen threw for five scores and just a tick over 300 yards and when you couple that with six rushes for 66 yards, it was a performance that reminded us all just how good he is.

What I do find surprising is that the Chiefs are only one-and-a-half point favourites despite playing the game in front of their own fans. With home field advantage often said to be worth three points, the bookmakers are indicating that the Bills would be favoured on a neutral field. This flabbergasts me.

I get that the two teams have already faced one another this season - with the Bills coming away with an emphatic 38-20 victory that wasn’t even as close as the scoreline indicates. Kansas City however are a far better team now than they were back in October.

Travis Kelce has been boosted to 9/1 to be the first TD scorer and that is decent value. He’s the only odds-on player at 5/6 to score anytime but only the joint third favourite to score first. Worth a small play that.

If you like 9/1 plays (which is a very random thing if you do) but whilst the Patrick Mahomes bet from a week ago is now too short for me, the same bet for Josh Allen is 9/1. I’m not going to put it up as it were but it is a notable bet.

I do like Kansas City to win and cover but odds on bets just don’t do it for me.