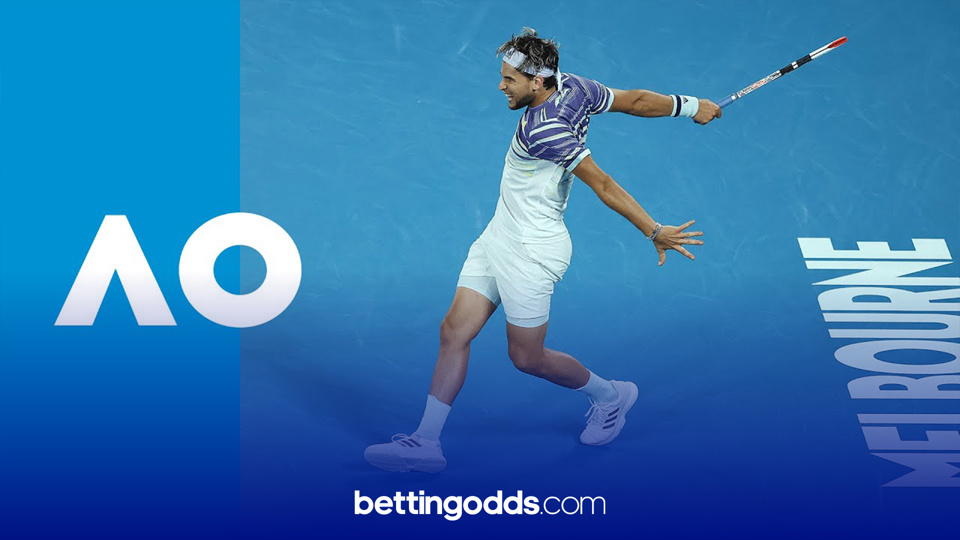 2020 was a year most of us are hoping to forget and move on from and what better way to start the year than a tennis Grand Slam! The Australian Open will be underway in the coming weeks and I’ve taken a look at two value picks for who I think can go all the way.

Every Grand Slam is always a star-studded event, even with Roger Federer withdrawing from the tournament we still have the likes of Djokovic, Nadal, Thiem and Medvedev competing for the title. Astonishingly, Novak Djokovic has won seven of the last 10 Australian Open titles which means it should come as no surprise to see him as the even-money favourite for this year's event.

However, the ‘next-gen’ are truly maturing in their game and I can see an upset happening this time. Last tennis season we saw Dominic Thiem finally break the trend of the big three, winning Grand Slams as he claimed the US Open, and I’m hoping this trend continues with another winner.

Before we make some predictions, here’s a set of stats and trends for the Australian Open over the last 10 years that might give you some pointers.

Daniil Medvedev is the man in form at the moment, and to be honest, I’m quite shocked to see him as the third favourite in the betting order. He’s currently representing odds of 11/2 with some bookies and I think it’s a terrific price. Daniil is coming into the tennis season fresh off back-to-back tournament wins at the end of 2020, one of them being the ATP Tour Finals - arguably one of the best tournaments of the year.

As well as having form on his side, Medvedev has a great record against some of ‘the big three’. Against Djokovic, Daniil has played him seven times winning three of them, however, it is important to note that two of Novak’s wins came in 2017, which was ultimately a less experienced version of Medvedev. What makes Medvedev’s last tournament win so impressive is the people he faced and how he beat them.

I think it’s clear that Medvedev’s favourite/best performing surface is definitely the hard court, thankfully that’s what the Aus Open is! He’s got quite the decent record on the surface…

Now Medvedev might not match all the previous trends of but there’s one man who ticks off a fair few boxes and it’s Dominic Thiem.

Thiem finally broke his Grand Slam duck after losing three finals in the space of two years, he managed to get an impressive win over young Alexander Zverev in the US Open where he went two sets down and came back to win 6-2, 6-4, 4-6, 3-6, 6-7. Going back to the aforementioned stats and trends, the Austrian matches all three of the ones mentioned.

The 27-year-old is currently ranked third in the ATP rankings and he’s fresh from winning his first major which was the 2020 US Open. Of course, the likes of Novak Djokovic and Rafa Nadal match them as well but I’d be leaning more towards Thiem with his recent form and being the latest hard court Grand Slam winner.

He was also the finalist in last year's Australian Open where he, unfortunately, fell to Novak Djokovic in the final despite at one point leading the Serbian 2-1 in sets. This was a great account for Thiem as I feel this was his turning point in majors, he is now going toe to toe with the best on hard surfaces and not just clay.

No matter who wins this one, we could be in for one of the most competitive Australian Open’s in recent times.

Wimbledon Betting Tips for Day 2 at Wimbledon as BettingOdds.com picks out their Best Bets for Tuesday's Play…

Wimbledon Betting Tips for Day 1 at Wimbledon as BettingOdds.com picks out their Best Bets for Monday's Play at…

Wimbledon Odds for the Women's side of the draw as BettingOdds.com provide their Betting Tips and Best Bets for…

Wimbledon Odds for the Men's side of the draw as BettingOdds.com provide their Betting Tips and Best Bets for…

French Open 2022 Betting Odds as BettingOdds.com preview the 2022 edition of the tennis from Rolland Garros where…