Denmark cemented their place at the 2022 World Cup last night after beating Austria 1-0 in Copenhagen.

The Scandinavians have so far aced their qualifying group, winning all eight of their games to date. More impressively, they have scored 27 goals along the way and boast a 100% clean sheet record with just two games left to play.

While it must be noted that their run-in was favourable, with the likes of Moldova, Israel, Scotland, Austria and the Faroe Islands making up the rest of Group F, Kasper Hjulmand’s men have been faultless throughout World Cup qualification, following a summer where they reached a European Championship semi-final.

They have accumulated 24 points, more than any other country in European qualification, and scored the second-highest amount of goals behind only the Netherlands, who have netted two more than them with 29 in Group G. 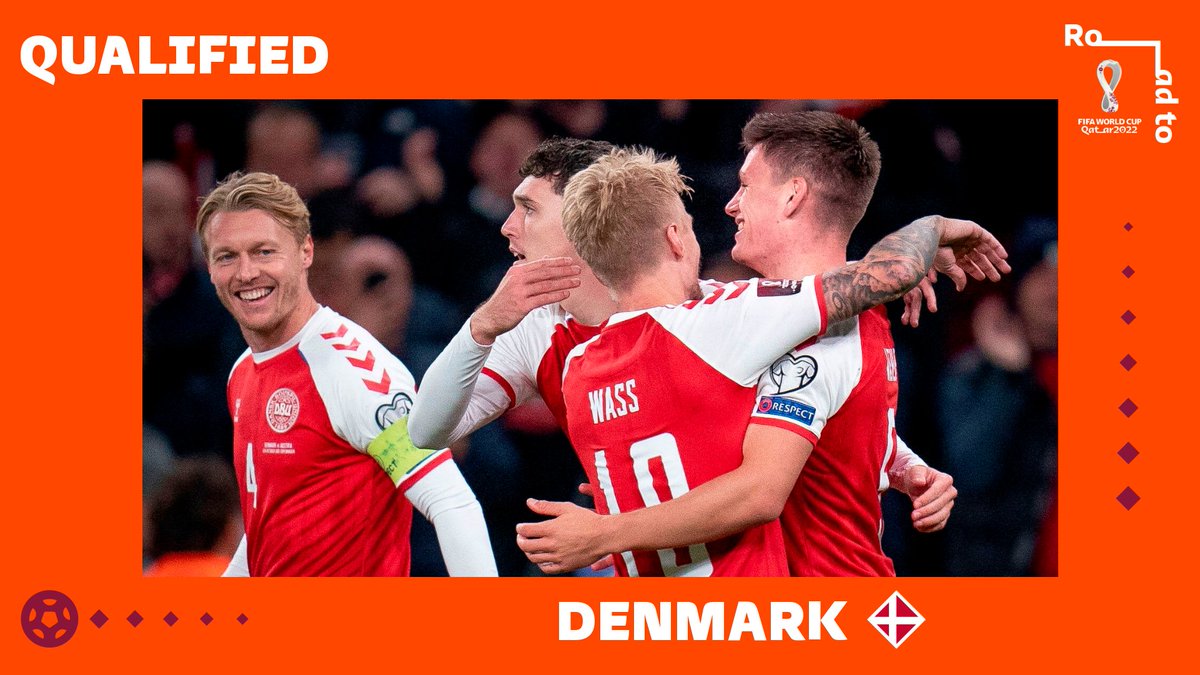 Denmark’s impressive form throughout the last 12 months has seen their price in the World Cup winner market cut from 150/1 into 40/1, and while that is a considerable odds-slash, it is a price that could potentially still represent some value in Qatar should they benefit from a favourable draw when the groups are selected in April.

Indeed, with the world's strongest footballing nations all present at next winter’s unprecedented tournament, the task in hand will be gargantuan for Denmark - much tougher than the one they faced in the summer against the elite from just their home continent.

That is not to say they cannot cause issues to the likes of Brazil, Argentina, Senegal and Algeria, as well as the strongest teams from Europe, though. Historically Denmark have always held their own at major tournaments. They famously won the Euros in 1992, before reaching the quarter-finals of the competition in 2004 and the semis earlier this year.

At the World Cup, the Danes have endured a more turbulent past, reaching the last-16 three times, and the quarter-finals once, throughout the last 35 years. Their last run-out in Russia three years ago was a disappointing one as they bowed out of the tournament in the group stage, but they are a much stronger side now and have clearly used the heartbreak in 2018 as a springboard to elevate themselves ever since.

Just five defeats in their proceeding 32 competitive fixtures have followed for Denmark since their World Cup exit in 2018, with three of those coming at Euro 2021. They are one of the most in-form international teams in world football right now and are fully deserving of their spot in Qatar, alongside the hosts and Germany - the only other nation to secure qualification at this stage.

Talent within their ranks

Joakim Mæhle scored the only goal of last night’s win over Austria and was a standout performer for Denmark at the Euros this year, alongside their leading scorer in the competition, the three-goal Kasper Dolberg. Both players will be just 25 by the time next year’s World Cup kicks off and well within their prime.

Kasper Schmeichel continues to churn out fine performances for his country, last night keeping his fifth consecutive clean sheet, while the ever-improving Mikkel Damsgaard is proving that he is an ample replacement for the missing Christian Eriksen - a player who has been so important for Denmark during the last decade - by providing five assists and two goals for his country in his six World Cup qualifiers.

Clean sweep has to be the aim for Denmark

With qualification now secure, it will be tempting for Denmark to take their foot off the gas during the next international break. Two dead rubbers against the Faroe Islands and Scotland will provide Kasper Hjulmand with an opportunity to rotate his squad and hand minutes to some of his fringe players, but achieving a clean sweep in Group F and, better still, retaining their 100% clean sheet record should certainly be a priority for Denmark in November.

The signs are hugely positive for the Scandinavians ahead of Qatar 2022. And, while securing a spot at the World Cup is just the start of a sizable challenge that awaits them in 13 months’ time, the manner in which they have completed it offers plenty of room for optimism that they can indeed be the dark horses of next winter’s tournament. We’d probably recommend backing them each-way, if at all, though.