Why James Maddison should be starting for England at Euro 2021

Has Gareth Southgate made a mistake omitting Maddison?
By John Barnes
07:00 Wednesday 26th May 2021 - 4 minute read

BettingOdds.com has teamed up with former England, Liverpool and Newcastle player John Barnes to give us his insight into the lead up to this summer's Euro 2021 Championships...

England manager Gareth Southgate yesterday announced his provisional 33-man squad for Euro 2021 and fans are already up in arms surrounding the pool of players who haven’t made the cut.

However, according to England legend John Barnes, it’s James Maddison who should consider himself the unluckiest to miss out.

In a new series of interviews with the former England and Liverpool wideman, John tells BettingOdds.com why the Leicester City playmaker should consider himself extremely unfortunate to not be featuring in England’s starting eleven at this summer's tournament, his own desired formation, and which eleven players from the 33-man provisional squad he would start in England’s opening game of the tournament against Croatia.

England’s 33-man provisional squad was announced yesterday with a number of very talented players being left out, but for you, which player in particular should count themselves the most unfortunate?

“For me, James Maddison has been the most unlucky in regards to the players who didn’t make England’s 33-man provisional squad.

“Before you select a squad you need to decide on the way you want to play and the formation you’re going to play, and then choose the players you need to facilitate those positions.

“I think we’re going to play three upfront, with one down the middle and two players at either side. Now, if that was up to me, it would be Raheem Sterling and Marcus Rashford on both wings and Harry Kane in the centre.

“You now need a player to sit just behind Harry Kane and, for me, James Maddison is the perfect number ten to play with those three. You have Jack Grealish, who is very good on the ball and loves to dribble, then you have Mason Mount, who could also play in that midfield three as well as Phil Foden. But in terms of someone who can pass and create for Harry Kane, Marcus Rashford, and Raheem Sterling, then I would have thought that player needed to be James Maddison, and that’s why he is the most unlucky player to have not made the squad.”

In his tenure as England manager, Gareth Southgate has been very experimental in terms of trying out different formations, but if the decision was up to you, which system would you be implementing if you were leading the national team into Euro 2020?

“If you play a 3-4-3 where you get your width from the wing-backs, then attacking wise you don’t want to play with two wide men because they will just be occupying the space.

“If Gareth feels confident in his two centre-backs, whoever that’s going to be, then I would expect him to play a 4-3-3.”

Now that you’ve decided upon your desired formation, which eleven players from the group of 33 would appear in your starting line-up for England’s opening group D game against Croatia on the 13th of June?

“In goal I would have Jordan Pickford with Manchester City’s John Stones and Manchester United captain Harry Maguire at centre-back. Then in the full-back positions I would choose Trent Alexander-Arnold at right-back with either Luke Shaw or Ben Chilwell at left-back. Luke Shaw in particular has had a fantastic season.

“In the midfield three I would choose Jordan Henderson, Declan Rice, and I'll have Chelsea’s Mason Mount playing in front of the pair of them.

“My front three would contain Harry Kane down the middle, with both Raheem Sterling and Marcus Rashford in the wide positions.”

Keep tuned for more John Barnes content for BettingOdds.com as we lead up to Euro 2021 beginning on June 11th. 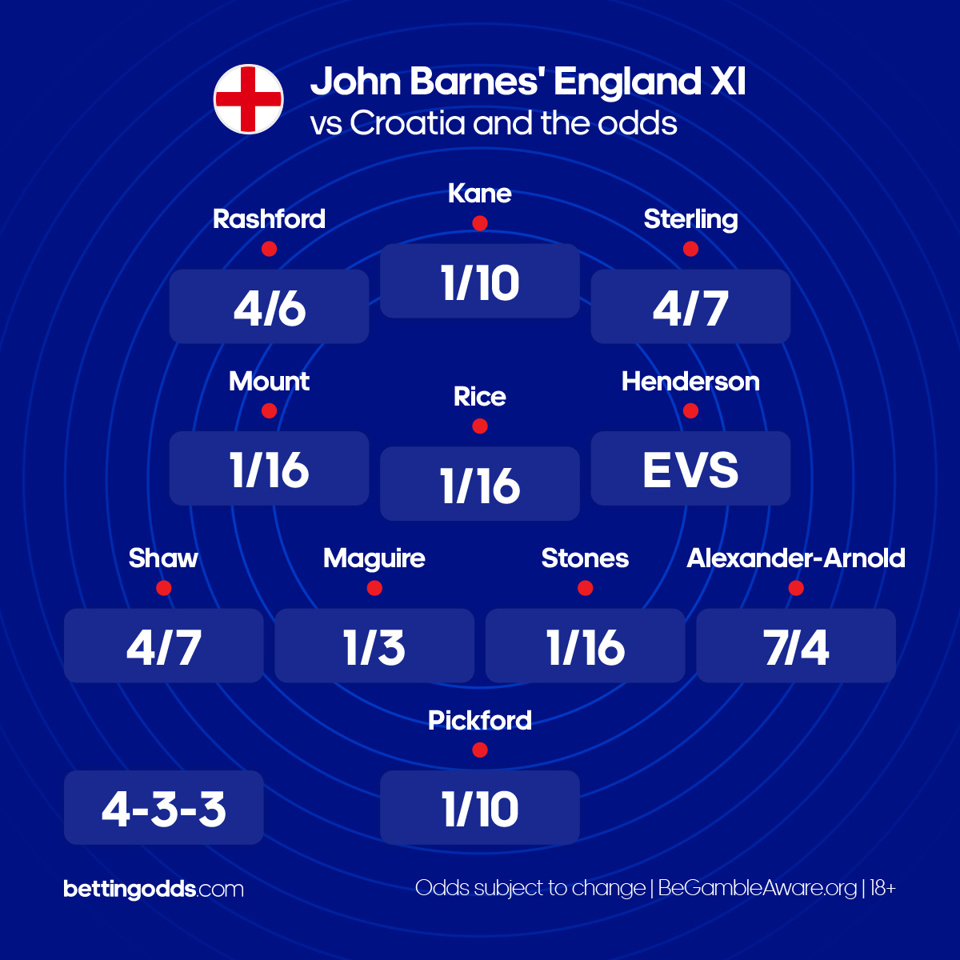