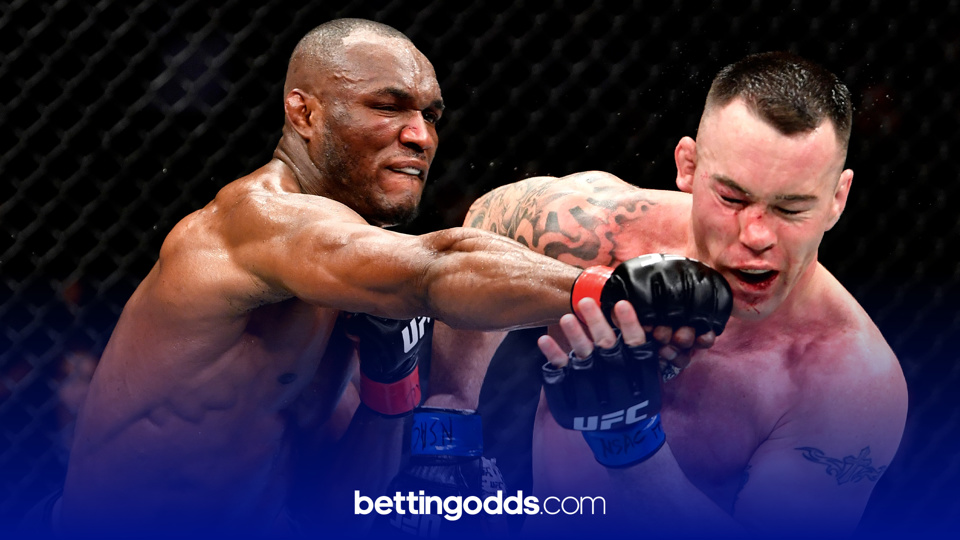 Kamaru Usman vs Colby Covington, a fight that well and truly delivered the first time around and a fight that is most likely going to deliver again as it headlines UFC 268 this weekend.

The Nigerian puts his title on the line again against the ranked number one welterweight in a fight that is well and truly heating up before we even enter the Octagon. The two fighters have been going at each other since before their first bout and the trash-talking has not stopped since then. The Champ opens up as the 1/3 favourite for the fight and we’re seeing around 9/4 for an upset from Colby.

Covington is now referring to himself as “Colby Chaos Covington 2.0” as he thinks he’s a completely different beast since their first fight, and well, he’s going to need to be if he wants any chance of beating the pound for pound number one. These two fighters are incredibly experienced wrestlers and often dominate fights this way but when they last met, they let it all out and only went to the ground twice which was when Colby was dropped by two Usman right hands.

As always we’re going to take a look at where the value in the fight might be and how we think the five-round thriller will end.

How Kamaru Usman could win

It should come as no surprise to see the Champ as the overwhelming favourite in the betting markets at 1/3. The Nigerian Nightmare TKOd Colby last time out and is undefeated in the UFC. The question is, how do you squeeze some value out of an Usman win? And in my eyes, it’s to bet on him to win via KO/TKO.

Although he may not been known for his knockout power earlier on in his career, Kamaru has been a hard hitter in his last four fights knocking out three of his last four opponents. The only one he failed to knock out was Masvidal who he then KO'd two fights later. Usman’s striking game has significantly improved and to quote Masvidal:

“He showed me something he didn’t have before, I didn’t feel his power in the first fight.”

Usman has clearly been working on his boxing skills which has resulted in this high finish rate and if this rematch against Colby is anything like the first fight, he’s going to connect numerous times.

You’re currently getting 6/4 for an Usman win via KO/TKO which I think is great value all things considered. I can honestly see this fight going the exact same as last time, no one will be looking to go for the takedown and it should be an all-out brawl with both of them looking to knock the other out. Bad blood between fighters normally results in them going for the knockout which is why I think the 6/4 on offer for an Usman win is the shout.

How Colby Covington could win

He may not be the most likeable character but there’s no denying how talented Colby Covington is when it comes to MMA. Only losing twice in his career boasting a record of 16-2 it’s clear to see he didn’t become the ranked number 1 welterweight by luck.

Colby always has a lot to say when the mic is in front of him and he’s recently said, “It was his best performance and it was my worst performance, that’s why this is Colby Covington 2.0.” He’s also been going at Usman whenever he gets the chance and constantly going on about how bad he is gonna beat him up, this just confirms to me that they’re going to start throwing punches from the get-go and the wrestling won’t be needed at all.

The striking game is definitely going to favour Usman and I don’t see a world where Chaos has the boxing skills and power to put Usman away. If there’s any way Covington is going to win it’s going to have to be via points in my opinion. I don’t see how he outstrikes Usman and although he had his moments in the first fight, most people probably had Usman winning the fight before the late knockout. For a straight-up Colby win you’re looking at about 9/4 but you’re actually getting double the price for Colby to win on points at 9/2 which I think is the play.

Other fights on the card

Usman vs Covington may be the main event on the card, but there are some absolute bangers on the main card…

Gaethje vs Chandler has been moved to the opening fight for the pay per view card and what a fight it is to start us off. Gaethje hasn’t featured in a UFC fight since he lost to Khabib but that shouldn’t put you off betting on him. Before that fight, he earned the right to fight Nurmagomedov with four impressive knockout wins and I’d be expecting him to finish Chandler like he has done to so many of his opponents, he’s currently 6/5 for a KO/TKO win!

The next big fight on the card is Namajunas vs Zhang. I’ll be honest, I didn’t see a way of Weili Zhang ever losing their first fight but Thug Rose hit an absolute peach of a kick which finished the former champ early in the first round. However, this has meant that you’re not getting a really solid price on Zhang to get her revenge on the American. In their first bout Zhang was around 1/2 to win and now you’re getting 10/11 for either fighter to win, as 50/50 as you can get it. I think Zhang is a way better fighter and I’ll be expecting her to win this one!

UFC 274 Odds as BettingOdds.com preview the UFC 274 Fight Card makes their Predictions and put together their…

UFC 272 Odds: We've got Gamebred to win by KO as one of our five picks

UFC 272 Odds as BettingOdds.com preview the UFC 272 Fight Card makes their Predictions and put together their…

UFC 271 Odds: We like the look of Bobby Knuckles in the main event

UFC 271 Odds as BettingOdds.com preview the UFC 271 Fight Card and put together their Best Betting Tips for the…

UFC 270 Odds: All the picks for this huge card

UFC 270 Odds as BettingOdds.com preview the UFC 270 Fight Card and put together their Best Betting Tips for the…

UFC 269 Odds as BettingOdds.com preview the UFC 269 Fight Card and put together their Best Betting Tips for the…