There will be a deflating feeling floating around the blue-half of Glasgow at Rangers after the club's popular title-winning manager, Steven Gerrard, left for pastures new at Aston Villa.

A rookie boss upon his appointment in 2018, Gerrard successfully transformed Rangers into title-challengers then title-winners. His profile was always huge given his success as a player, but now his managerial stock has risen up a fair few notches too.

His ambitious nature means that he feels it's the right time is right to test himself against some of the best bosses on the planet on a regular basis: Jurgen Klopp, Thomas Tuchel, Pep Guardiola, and Antonio Conte all await down south.

Rangers will be gutted at the timing of Gerrard’s exit. They are currently four points clear at the summit of the Scottish Premiership as they bid to defend their title; they are battling away in the Europa League group stages; and have a League Cup semi-final in 10 days time.

However, the sudden new vacancy opens up an attractive opportunity for another manager, but who?

We’ve taken a look at three exciting bosses who can build on Gerrard's success...

The early frontrunner with most bookmakers and currently a best-priced 6/4 (William Hill), former Rangers player Giovanni Van Bronckhorst is a name that needs no introduction to Gers fans, many of whom are calling for a sensational return to Ibrox as manager.

Van Bronckhorst enjoyed a stellar playing career during which he won a plethora of honours at Feyenoord, Arsenal, Barcelona, and Rangers whom he helped win the domestic treble in his first season followed by a double in his second.

As a coach he had a bedding-in period as assistant manager at first-club Feyenoord before stepping up as manager. He proceeded to win five trophies in four seasons, including the club’s first Eredivisie in 18-years, as he ended the dominance of Ajax and PSV - striking comparisons to Gerrard halting Celtic’s streak.

This was followed by a surprise move to China at Guangzhou R&F. His time in charge was disrupted by a worldwide pandemic which meant he spent large periods away from his family. Guangzhou eventually finished the delayed and much-changed season 6th in their league group, then 11th overall.

“Rangers are a special football club, and I always look out for their results," he told The Sunday Post in 2019.

"I’ve been linked with it once or twice, and that was very nice. It’s a great football club and has a special feeling in my heart. So it was a huge compliment. But I was totally committed and focused on Feyenoord.

Appointing a club icon doesn’t always work, but naming the popular Van Bronckhorst as manager would surely be a hit with most supporters.

"I can only look with pride and a smile on my face on my wonderful years at Rangers," he told Sky Sports last year. "I can see similarities between Steven [Gerrard] and me, it's a different task to being a player but we're both enjoying it.”

Like Gerrard, he favours an attack-minded and dynamic 4-3-3 formation, meaning the current crop of Gers players won’t have to waste any time adapting to a completely new playing style.

Van Bronckhorst did a terrific job as a rookie manager at Feyenoord, and the season he won the club their first league title of the 21st Century his side became only the second Dutch team to stay at the top of the table from start to finish.

The Dutchman has since developed his skillset in the form of five months spent with the City Group where he got to talk tactics with Pep Guardiola, observing the Spaniard’s elite coaching methods first hand in training.

Guardiola isn’t the only manager he’s been influenced by, Van Bronckhorst played under the likes of Guus Hiddink, Arsene Wenger, Frank Rijkaard, and Dick Advocaat. "I've tried hard to form my own identity and philosophies as a coach, while never forgetting the positives I took from all of them." 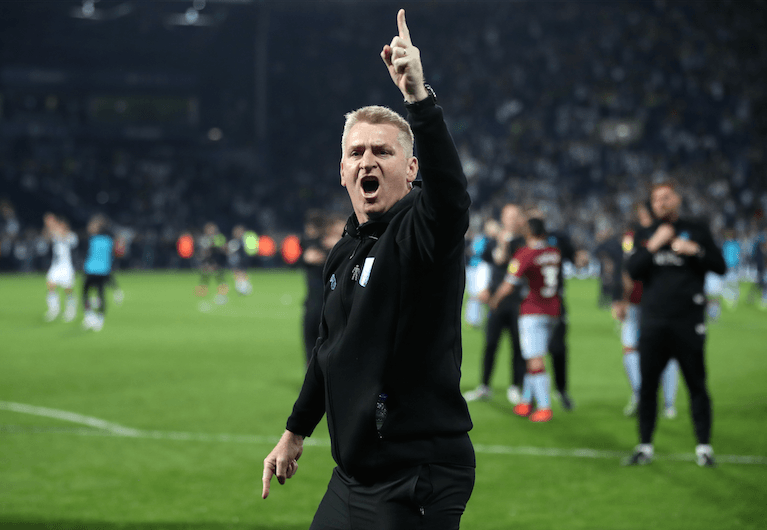 Could Dean Smith make a swift return to management?

Could a weird sort of managerial swap deal be on the cards?

It’s not often you see two managers switch jobs, but that could potentially happen here, with Dean Smith a tempting price at 16/1 (Bet Victor) to replace the man who is about to replace him at Aston Villa.

Smith is an excellent manager who has improved every club he’s been employed at. His CV may not boast silverware, yet, but the re-building jobs he successfully undertook at Walsall, Brentford, and then Aston Villa were admirable. Simply put, he left every club in a far better position than which he arrived.

On a small budget, Smith transformed first-club Walsall from relegation strugglers to a side that started to believe they could challenge for the League One play-offs, he also took the Saddlers to Wembley for the first time in their history.

His impressive work caught the eye of Championship side Brentford, where he employed an ​​attractive passing game and achieved three top-10 finishes - laying the foundations for his assistant, Thomas Frank - before his beloved boyhood club Aston Villa came calling in 2018.

Smith instantly led his club back into the Premier League, preserved their top-flight status and finished runner-up in the EFL Cup, then secured an 11th-place finish in an exciting 2020/21 campaign which saw Villa hammer defending champions Liverpool 7-2. If it wasn’t for Jack Grealish’s untimely injury Villa could well have finished in the top-eight.

Next Rangers Manager: Who could replace Steven Gerrard?

Steven Gerrard has moved into the red-hot 1/25 favourite to become the new Aston Villa manager following reports that the Rangers boss is interested in replacing Dean Smith, with an approach imminent. The compensation package is believed…

Smith, a former chess champion, is an adaptable tactician who loves coaching, he values human relationships and has a record of improving players on the field and off it. Under his guidance Jack Grealish transformed into one of England’s most exhilarating players, Tyrone Mings was solid when called upon at the Euros, Ollie Watkins has won a handful of caps too, John McGinn has developed into one of Scotland’s most influential players, while the rejuvenated keeper Emiliano Martínez thrived during a debut season which ended in Copa America glory.

Smith’s a positive person whose leadership skills shone through during his playing days when he captained four of the five clubs he played for. His managerial journey has been one of progression and while he - like many Villa fans - will be gutted at his exit, his stock is even higher now and he thoroughly deserves a crack at winning silverware in front of one of the most passionate fanbases around. 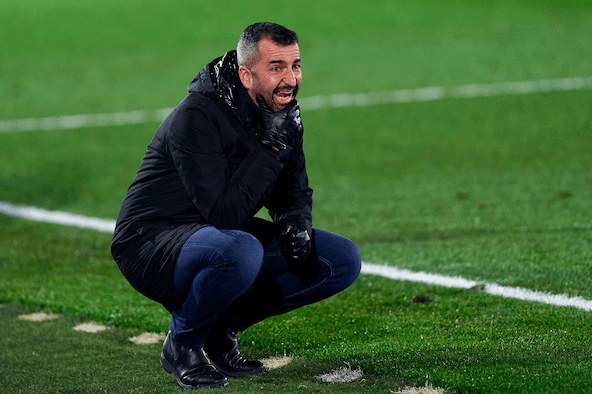 Diego Martinez did a stunning job in Spain

While the first two shouts will be well known to supporters, Diego Martinez isn’t a household name, yet. However, he’s emerged as one of the brightest managerial sparks on the circuit and represents an intriguing price at 25/1 (Bet Victor) to manage Rangers.

Martinez is only 40 yet he’s been coaching since the early noughties. After developing a taste for management as a youth coach at Spanish side CD Imperio de Albolote, he proceeded to work his way up through the ranks at Arenas CD: from youth coach, to assistant then manager. He moved on to take charge of Motril, then stepped up another level to Sevilla’s backroom staff where he played a role in helping boss Unai Emery win the 2014 Europa League success, then led the club’s reserves to promotion to La Liga 2.

He spent a year at CA Osasuna who agonisingly missed out on the La Liga 2 play-offs by one point, before going on to enjoy a stunning three-year spell at Granada.

Under his watch, the club were instantly promoted to La Liga where they impressively finished 7th - above Valencia and Athletic Bilbao, while they scored more goals than Atletico Madrid - and reached the Copa del Rey semi-finals, while he was awarded with the famous managerial Miguel Muñoz Trophy. A 9th-place finish was secured last season as well as a voyage through to the Europa League quarter-finals, where they lost to Man Utd.

Diego Martínez leaves Granada. Quite comfortably the biggest overachieving coach in Spain over the past two seasons. Hard to see where he goes this summer but someone is about to get a very good manager. https://t.co/rGuBXRvbwW

Regular Sack Race readers will know we’re big fans of the Spaniard. His work on a small budget at Granada is astonishing and while it came as a surprise to see him depart in the summer, we’re eagerly awaiting his next move in the managerial arena.

At Granada he predominantly used a 4-2-3-1 formation but was known for his tactical versatility, often switching things up during games. In turn he masterminded multiple wins over Barcelona, out-tacticed Europa League victor Julen Lopetegui, and dumped Napoli out of europe. Perhaps tellingly, Granada’s form has tailed off since his exit, with the club currently only above the relegation zone on goal difference.

I'm amazed how Diego Martinez is still available after what he did with that Granada side... how is not every single club in need of a top-class coach fighting each other to get him? https://t.co/dv6nyMYxmY

“His success has been built on his ability to get those at the club to buy into his philosophy. Fans can't help but enjoy a team that is not afraid of anything,” Guillem Balagué wrote for the BBC.

“His philosophy is a system based on hard work, solidarity and team unity - it is an adventure they all want to be part of. All this coupled with an attention to detail and unfaltering support and loyalty towards the players he has available to him has created the perfect mentality and atmosphere in the Granada changing room.”

Martinez has been touted as a future successor to Marcelo Bielsa at Leeds and was recently linked to Watford. At the time of writing he’s not near the early crop of favourites for the Rangers post, but his coaching credentials combined with the remarkable job he did at Granada and experience of managing in the Europa League, means he’s definitely one to keep an eye on.