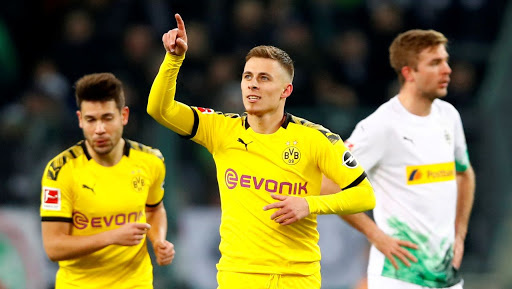 Dortmund will be looking to return to winning ways against basement-dwelling Paderborn
By Charlie Zazzera
17:08 Friday 29th May 2020 - 4 minute read

Sunday’s big game sees two teams from the opposite ends of the table go head-to-head in a bid to try and keep their seasons alive. Paderborn, winless in the league since January, are a big 7/1 to win - a feeble 12% chance of beating BVB.

The game is riddled by injuries and suspensions with Erling Haalnd out with a knee injury picked up in the Bayern game, who is joined by Mahmoud Dahoud and Marco Reus in the treatment room. Meanwhile, Paderborn’s angry hatchet man Klaus Gjasula is suspended due to picking up FIFTEEN yellow cards this season - the most in Europe's top five leagues - bringing a tear to the eye of yellow card backers.

Spending the afternoon researching Paderborn full-backs, we felt like a Bundesliga hipster analysing where bookings will come from over a Macchiato and I’m pleased to say we’ve discovered some value.

Enjoy a well earned chilled Sunday by getting the game on BT Sport at 5pm, accompanied by these three football tips…

Sunday's Bundesliga Winning Tip
Thorgan Hazard to have two shots on target Borussia Dortmund v Paderborn
3/1
Hazard has started the last seven games and is very likely to keep his place in a fluid attacking trio and add to his six goals and 12 assists.
Odds correct as of 2020-05-29 17:01 Odds subject to change.

Incredibly Dortmund only have two recognised “attackers” in their squad - Haaland and Reus, who are both injured. We expect Jadon Sancho to return to the starting line-up but he’s far too short in the scoring or shots on target markets to seduce us into backing him.

Thorgan Hazard has started the last seven games, is very likely to keep his place in a fluid attacking trio and add to his six goals and 12 assists - his best ever season for goal involvements. We’re backing him to have two SOTs (shots on target) and our good pals at PaddyPower have kindly boosted this from 5/2 to 3/1, an industry best price.

And the finish to match from Thorgan Hazard! 🔥

The former Mönchengladbach man puts Dortmund in the lead at Borussia-Park... https://t.co/LaszLdDdaO

18:18 PM - 7th Mar 20
147
1942
Live In Play Odds
Sunday's Bundesliga Tip #2
Julian Brandt to score and Sebastian Vasilladis to be booked Borussia Dortmund v Paderborn
11/1
Julian Brandt was impressive in Dortmund’s last win and he’ll be starting CAM and we think he's a good price to get on the scoresheet. Vasiliadis also looks a good bet to get his 10th caution of the season.
Odds correct as of 2020-05-29 17:03 Odds subject to change.

Hazard’s mate Julian Brandt had Twitter fanboys drooling in Dortmund’s 2-0 victory at Wolfsburg and the Germany playmaker has become a key player since Lucien Favre switched from a 4-2-3-1 to a 3-4-3 in November. He’ll be starting CAM and we think at 15/8 a tasty price to get on the scoresheet against a weak defence.

Gjasula might be out but his centre midfield right-hand-man Vasiliadis is still on hand to do his dirty work and against BVB we fancy him to get his 10th caution of the season. Nearly 8/1 on Bet365, Betfair are giving us 11/1 for this decent double.

Sunday's Bundesliga Winning Tip
E Can & Hakimi each to have 1 or more shots on target and E Can & Jamilu Collins both carded Borussia Dortmund v Paderborn
79/1
Can will have no problem backing himself with shooting from distance against a compact Paderborn and can also be exposed in the bookings market having picked up four bookings in the eight games he’s started this season. Hakimi will be looking for his eighth goal of the season. Defender Jamilu Collins will have Sancho, Hazard and Brandt running at him and he’s already had six yellows this season.
Odds correct as of 2020-05-29 17:05 Odds subject to change.

With Mahmoud Dahoud out, the Bundesliga website have predicted that Emre Can will start in the middle for Dortmund, so he’s the centre-piece for our long shot. The extraverted German is not shy of confidence and will have no problem backing himself with shooting from distance against a compact Paderborn. He’s also not shy of putting his foot in and has picked up four bookings in the eight games he’s started in Italy and Germany this season.

Starting on the left we have the poor Jamilu Collins who will have a Sancho, Hazard, Brandt three-pronged attack running at him, he’s already had six yellows this campaign and destined for another against that electric pace. Moving to the right and Achraf Hakimi, who has recently been linked with Man City, will be marauding up the flank looking for his eighth goal in 2019/20. He is 6/5 to have a SOT and completes our bold long shot that with a £2.50 stake returning £202.50.

Odds subject to change on all of these tips so if interested make sure to get involved sooner rather than later. We hope these tips serve you well and cap off a profitable weekend of punting.