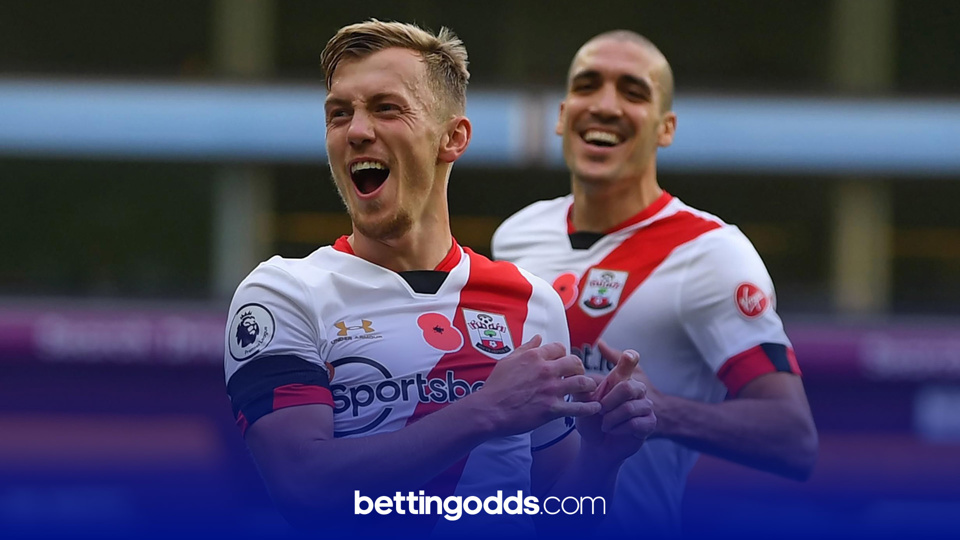 Southampton are unbeaten in seven away league matches and we fancy the Saints to get something at Leicester as part of our football tips for the game
By Anthony Eadson
12:21 Friday 15th January 2021 - 5 minute read

The final game in the Premier League on Saturday comes from the King Power Stadium where Leicester take on Southampton. Our man @AnthonyEadson is on hand with three football tips for the game which can be seen live on BT Sport, kicking off at 8pm.

Danny Ings tested positive for Covid-19 last week and manager Ralph Hassenhuttl stated on Thursday the striker will likely miss Saturday’s game. Che Adams is expected to return after missing the win over Liverpool. Jannik Vestergaard, Nathan Redmond and Moussa Djenpo are all sidelined for the visitors. Leicester only have one confirmed absentee for the game in Dennis Praet.

After the news that Danny Ings will most likely miss the game, Brendan Rodgers' side have shortened the odds-on price of 8/11 to take all three points. The draw is available at 11/4 with a win for Southampton priced at a rather generous looking 4/1.

When the double chance market opened, Southampton were as short as 4/6 with bet365 to win or draw the game. They are around even money with most firms on the +1 handicap, off the back of the news that Danny Ings will not feature due to Covid-19. I feel this is an overreaction, and I’m willing to get involved with Southampton +1 handicap at evens with Paddy Power. This means that Southampton start the game with a 1-0 lead and our bet will land should they win or draw.

I thought Leicester were uninspiring in their 2-1 victory over Newcastle in their most recent league game and despite a good run of results over the festive period I think Southampton can cause them problems. Leicester have been awarded a massive ten penalties this season and I do think their position in the table flatters them slightly.

Southampton come into this game full of confidence after a 1-0 victory over Liverpool and Ralph Hassenhuttl’s side are unbeaten in their last seven away league games. The Saints have kept a clean sheet in all of their last three, and are undefeated in their last five trips to the King Power in all competitions.

Stuart Attwell will be the referee in charge of the game and he currently ranks first of 19 for yellow cards per game shown this season. With an impressive average of 4.78 per game, Attwell is certainly not shy when it comes to brandishing the bookings and with Leicester being the most booked team in the league this campaign, I’m hopeful of a good few being shown on Saturday.

At 28/1 with bet365 I’ve opted for both Wilfred Ndidi and James Ward-Prowse to pick up a card. Ndidi is now back in the starting lineup for Leicester after missing a chunk of the season through injury. The Nigerian has been cautioned twice in eight games this term and received 14 yellows across the two league campaigns prior to this.

Paired with Ndidi is Southampton’s midfield maestro James Ward-Prowse. I’ve been impressed with the 26-year-old lately and he has four goals and four assists already to his name this season. When it comes to cards, Ward-Prowse has picked up three yellows this season and was shown a further nine in the 2019/2020 campaign. With Stuart Attwell in charge I feel there’s more appeal to this double than the 28/1 suggests, although it’s worth noting that the same bet is just 9/1 with Paddy Power.

The attacking minded midfielder is currently averaging 0.75 shots on target per game in the league this season and has the ability to rack up the attempts with 14 shots in his last five games. Maddison has registered at least two shots on target in two of his last five games and being a possible free-kick taker for Saturday I’m including the 9/2 with Paddy Power in this double.

Youri Tielemans has been booked on four occasions in the league for the Foxes this season. The Belgian picked up another on International duty in the Autumn and also in the Europa League group campaign. With six in total for club and country since the start of the season I’m fancying Tielemans to find his way into Stuart Attwells often crowded notebook.

That’s three bets of 21/20, 28/1 and 33/1. Let’s hope for an entertaining game and plenty of cards. Good luck to anyone following and please always gamble responsibly.

#OnThisDay last year, #SaintsFC continued their resurgence with a 2-1 win at #LCFC: https://t.co/c5KAoJrKSI