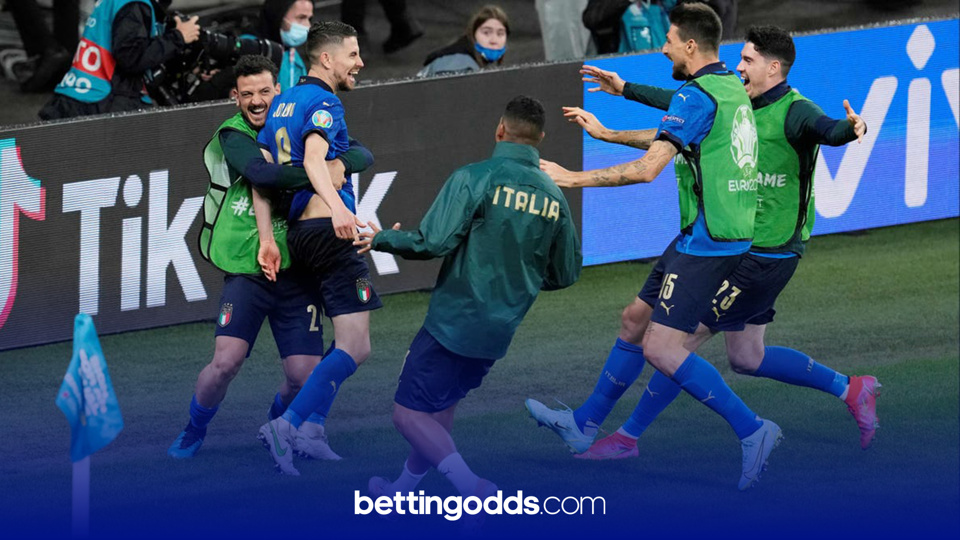 Italy have booked their spot in the final of Euro 2021 after beating Spain on penalties in last night’s exhilarating semi-final at Wembley.

After taking the lead through Federico Chiesa in north London, the Azzurri were pegged back late on after Spain substitute Alvaro Morata found the net with a cool finish to level things.

Morata went from hero to zero in the shootout, though, missing his country’s final spot-kick which allowed Jorginho to send Italy through with a hop, skip and a jump (literally).

Roberto Mancini’s men are now 5/6 favourites to win the Euros on Sunday, but how has their outright price changed throughout the tournament so far? 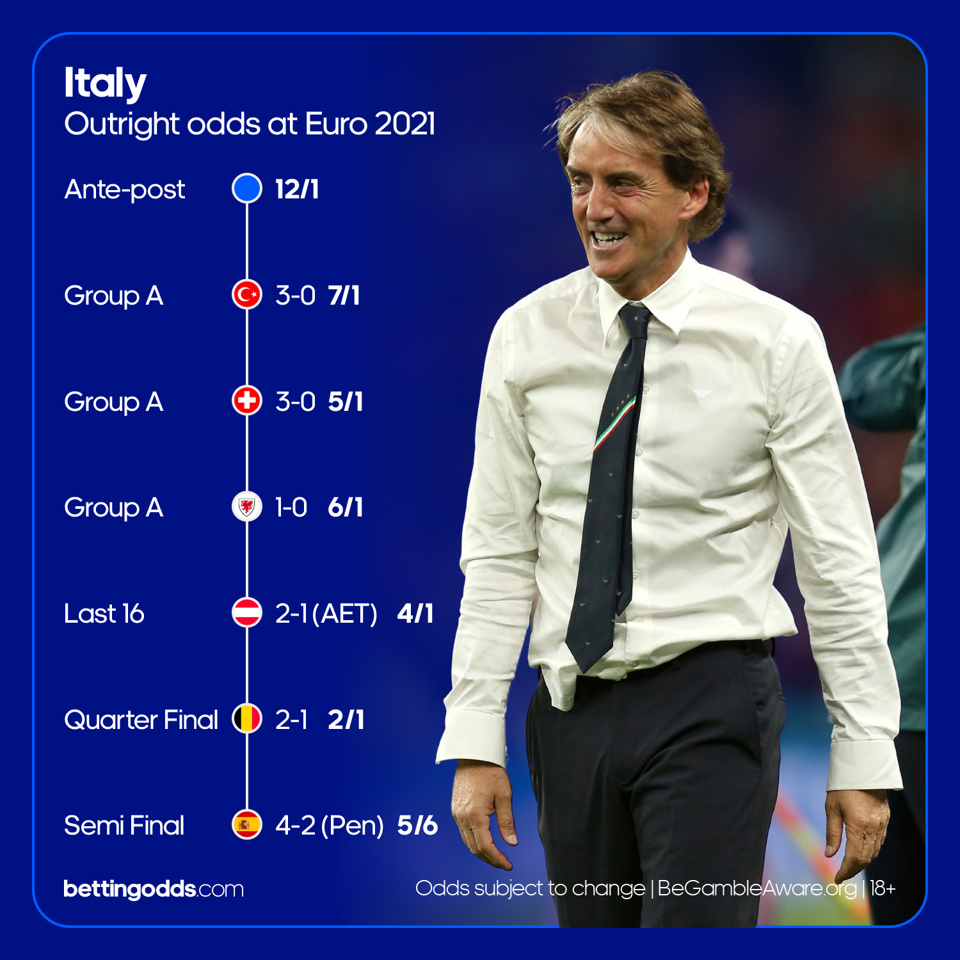 Italy were dubbed as ‘dark horses’ by many in the build up to Euro 2021 due to their exemplary defensive record. The four-time world champions had not lost a game since September 2018 prior to the Euros starting in June, which prompted a large number of punters to back them to go the distance this summer.

Italy actually went off at 8/1 after being backed in so much, though at the end of May were priced at 12/1 to win the competition. Incidentally, they are still yet to lose a game of football on September 10th 2018. Remarkable.

Italy’s price shortened to 7/1 following their assured performance and victory over Turkey on the opening day of the Euros. Goals from Ciro Immobile and Lorenzo Insigne, partnered by an OG from Merih Demiral got the Azzurri off to the perfect start and fired them to the top of Group A ahead of their second match against Switzerland.

A second consecutive 3-0 win over the Swiss followed for Italy, who played some fantastic football throughout. A brace from Manuel Locatelli alongside Ciro Immobile finding the net for the second time in as many matches secured a routine win for the hosts in Rome, keeping them top of the pile in Group A.

Their price was subsequently slashed to 5/1 in the winner betting, as plenty of punters started to sit up and take notice of Manicini’s well-oiled machine, backing them to go the whole hog at the Euros for the first time since 1968.

Wales proved the stiffest test for Italy in Group A. Rob Page’s side enjoyed a solid qualifying campaign and went through as group runners-up, and almost put an end to Italy’s flawless group stage campaign with a regimented performance at the Stadio Olimpico.

A largely changed team for the home side saw Matteo Pessina come into the side and score just five minutes before the interval, which proved to be enough as Wales couldn’t force an equaliser, unhelped by the sending off of Ethan Ampadu early in the second half.

Interestingly, Italy’s price to win Euro 2021 actually drifted slightly back out to 6/1 following that win over Wales, most probably due to the fact it was more of a narrow victory compared to the back-to-back 3-0 cruise control-wins which came before.

A perfectly worked freekick by #ITA against #WAL, as Pessina gets the final touch to score past Ward.

As it stands, Wales & #SUI are level on points. #WAL still second in Group A on goal difference...

Italy were drawn against Austria in the last-16 of the Euros after topping Group A, but it took extra-time to settle things at Wembley after the game ended goalless in normal time. The match exploded in extra-time, however, with Federico Chiesa finding the net from a tight angle on 95 minutes, before Matteo Pessina doubled his tournament total with a goal for the Italians 10 minutes later.

Sasa Kalajdzic hit back for Austria in the second half of extra-time, but it proved to be nothing more than a consolation as Mancini’s men saw out another victory to set up a mouthwatering quarter-final against Belgium. Italy’s price to win the tournament shortened to 4/1 after the game, but a huge test presented itself in the next round in the shape of the world’s number 1 ranked international team...

Romelu Lukaku clawed one back for Belgium from the penalty spot in first half injury time, but after a goalless second half it was Italy who progressed through to the semi-finals, leaving Belgium’s ‘Golden Generation’ pondering what could have been (yet again). Italy’s price was further cut to 2/1 ahead after the game.

Last night was a superb advertisement for the European Championships. It had a bit of everything: intensity, skill, goals, and a sprinkling of shithousery. It took penalties to separate the two sides in the end, with Italy prevailing thanks to a cool-as-you-like spot-kick from Chelsea’s Jorginho.

Roberto Mancini’s side are now 5/6 favourites to lift the trophy, although that will certainly change should England get the job done against Denmark this evening. Come on boys!