In the first of a five-part series The Sack Race takes a closer look at five unsung managers operating in Europe who have so far enjoyed stellar seasons. We kick things off with SC Freiburg manager Christian Streich…

Julian Nagelsmann’s Bayern Munich and Marco Rose’s Borussia Dortmund hog the top-two places in the Bundesliga, but far more interestingly there's an intriguing battle for the other two Champions League spots being played out behind the two big guns - and it involves a couple of clubs you may not expect to be in the mix at the half-way stage of the season.

In 3rd you’ll find Hoffenheim, managed by former Bayern Munich reserve team boss Sebastian Hoeness. Hoeness is enjoying quite the campaign, and while he’d fully deserve a place In this manager series, it’s the boss in 4th, Christian Streich, who is the focus of our attention.

Streich is someone who is enjoying something pretty unusual in modern management: longevity.

A couple of weeks ago Streich celebrated his 10-year anniversary in charge of SC Freiburg; compare that to last season’s top-six Bundesliga sides who back in the summer each had their own game of managerial musical chairs.

Freiburg isn't a trigger-happy club who fire their managers at the first wobble. They offer stability, continuity, have a clear identity, and look to maximise their strengths.

Streich bleeds Freiburg. A former player, followed by a successful spell as youth team coach, then assistant of the senior side, the Bundesliga’s longest-serving manager is a captivating character who fascinates in press-conference and on the touchline in equal measure.

Upon his promotion from assistant to manager, he took over a side glued to the bottom of the Bundesliga. He led his troops to safety by nine points then subsequently delivered an unbelievable 5th place finish in his first full season (2012/13); just four points off a Champions League spot. Relegation followed two years later, but a parting of ways was out of the question, and he oversaw an instant return to the top-flight - fending off Ralf Rangnick’s RB Leipzig to win the title - and has since gone on to bag two more top-8 Bundesliga finishes.

Streich now has his side up in the dizzying heights of 4th, one point off 3rd, and above the likes of Bayer Leverkusen, RB Leipzig, Frankfurt, Wolfsburg and Borussia Monchengladbach. An incredible achievement given the gulf in finances between modest Freiburg and the league’s big spenders. They even went unbeaten in the opening 10 weeks of the season - longer than any other club - before Bayern edged them out 2-1.

Streich overcomes numerous obstacles season-by-season. While the Black Forest location is stunning, it’s remote, meaning it can be difficult to lure both players and sponsorship. There’s also the added danger of having their best assets poached by other clubs, and while this has become part of the club’s model, it means that Streich has constantly had to adapt and re-build.

This is a club who thrive as a cohesive unit; no egos are allowed. Freiburg’s modest budget means they must unlock the potential of academy players, 12 of whom feature in the current squad.

Freiburg’s performances this season have been built on a rock-solid defence, which has conceded just 18 goals; the joint-fewest alongside Bayern. Dutch shot-stopper Mark Flekken has made a myriad of superb saves, while centre-back Nico Schlotterbeck has been immense and is likely to be linked with a move away this transfer window.

Freiburg have beaten both Dortmund and Leverkusen and while their Goals For count may not be earth-shattering - a respectable 30 goals in 18 games - but on their day they are capable of the extraordinary. Just ask poor Adi Hütter and his side Borussia Monchengladbach who were pummelled 6-0 in their own back yard a month ago; all six goals came in the first-half with five scored after just 25 minutes. Remarkable.

Furthermore, set-piece maestro Vincenzo Grifo has been a delight to watch with five goals and seven goals so far this season.

On the touchline Streich is a delightful ball of passion and energy. He was even reduced to tears back in September when fans were singing his name after the club's final game at the Black Forest Stadium; a game they won 3-0 against Augsburg.

Freiburg manager Christian Streich was in tears after the club played its final game at the iconic Black Forest stadium and the fans sang his name.

This has been his home for the last 30 years 🥺 https://t.co/mooKmdUjT4

As noted in Jonathan Harding’s excellent book Mensch: “Language and communication are the keys to any kind of leadership - and Streich is someone who values the right choice of words.” He is well-loved in Germany and part of that is because of his loyalty, honesty, authenticity, and ability to speak out on a range of non-football issues. Over the years he’s spoken out on Germany’s refugee crisis, racism, gender inequality, disability, and earlier this season he shared his view on the controversial Newcastle takeover:

"There are always things happening in football that have exceeded all limits. In this case it is  unbelievable who is part of this consortium - It includes people who are involved in serious human rights violations. I have a problem with that." 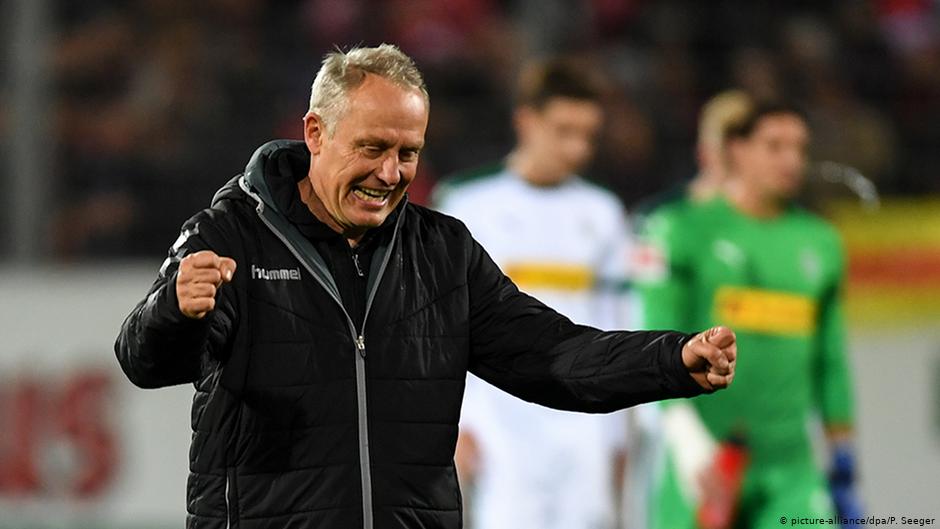 Freiburg coach Christian Streich is a different breed in so many ways.

Here's a thread of moments in which he proved he's quite simply one of the most incredible people in world football.

I’m sure you’ve all seen the brilliant video of Neil Warnock cycling around through Hurworth in his Middlesbrough gear - if not then enjoy it here - well over in a beautiful pocket of Germany you’ll find Streich - the son of a butcher - biking to work:

“I live 300m from the stadium. It wouldn’t make sense to take the car, would it?"

The success story of Streich, 56, doesn’t simply boil down to one very impressive first-half of the current campaign. So, while Bayern will surely go on and cement a 10th straight title, Freiburg's ability to exceed expectations and knock firmly on the top-four door is far more compelling and heartwarming.

The likes of Leipzig, Gladbach and co are all expected to bounce back from thoroughly underwhelming starts, and while Freiburg currently reside in the top-four they are only three points above 8th spot; plenty can change from now until the season's conclusion in May.

Yet, it really would be fantastic for football if they could secure a Champions League place, for which they are available at 11/4, while they can be backed at 25/1 to lift the German Cup.