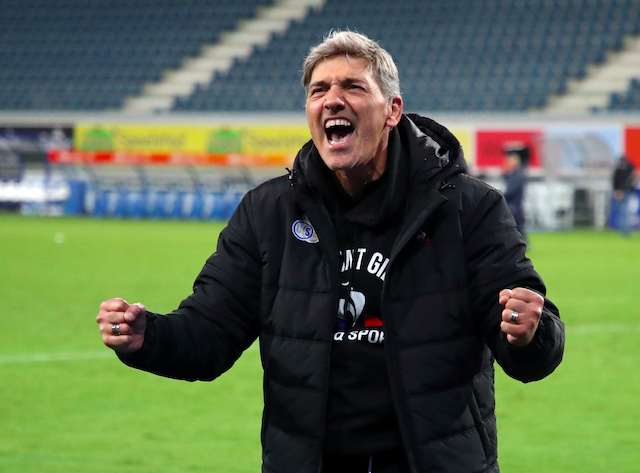 In the third instalment of our five-part manager series looking at managers making waves in Europe this season, we head over to Belgium where Felice Mazzu is enjoying a stunning season at newly promoted Royale Union Saint-Gilloise, who in their first top-flight season in 48 years are bidding to win their first league title since 1935…

Man City are on course to retain the Premier League title, PSG are miles clear in Ligue 1, Bayern Munich are motoring towards their 10th straight Bundesliga triumph, Real Madrid top La Liga and Inter Milan are mounting a strong defence of their Serie A crown, but over in Belgium a shock name from a bygone era tops the table.

Since 2010 we’ve been accustomed to seeing Anderlecht and Club Brugge swap Belgian titles, Gent and Genk have chipped in too, but this season a new narrative has gripped the nation with the spotlight firmly pinned on Royale Union Saint-Gilloise and their manager Felice Mazzu.

Sacked 20 games into his tenure at defending champions Genk back in 2019, Mazzu contemplated a return to work as a PE teacher. Fortunately, he was instead tempted back into the dugout seven months later, albeit down in Belgium's second tier with Union SG: Few could have predicted the colossal impact he’s since had over the course of an astonishing 18 months.

In Mazzu’s first season at the helm the Brussels-based team romped to the Belgian First Division B title with 70 points from 28 games. They finished 18 points clear of runners-up Seraing, fired in 69 goals, and lost just twice. As a result the club ended nearly 50 years of hurt by booking a place in the top-tier for the first time since the 1972/73 season.

Having spent so long outside of the top-flight and with just a handful of players with top-tier experience, you’d have been forgiven for expecting a transitional season back in the Belgian Pro League. The aim was surely to avoid the drop at all costs. Fast-forward to January and Mezzu’s men have stormed seven points clear of defending champions Club Brugge - and 11 points ahead of Vincent Kompany's Anderlecht - as his side unexpectedly chase a first league title in a whopping 86 years.

After 22 games Union have accrued the most wins (16), the most goals (54), and conceded the fewest goals (20). They are currently on course to do a 'Leicester' except without the season spent adjusting to life back in the top-flight.

Mazzu has awoken a sleeping giant. Only Anderlecht (34) and Club Brugge (17) have won more Belgian titles than Union (11), but while eight of the last 10 editions of the Belgian Pro League have been gobbled up by either Anderlecht or Brugge, Union’s last triumph dates all the way back to 1934/35.

So, you can see why everyone associated with the club is pretty excited right now.

Brighton owner, Englishman Tony Bloom, has played a pivotal part in Union’s rejuvenation. After purchasing the club in 2018, he oversaw a historic promotion last season, and is now gunning for a remarkable league title and even a spot in the Champions League.

The club's aggressive data-led approach, combined with creating the right environment for players to thrive in, has worked wonders so far. This is a squad that consists of players from different backgrounds and cultures, many of whom have been plucked on free transfers or on loan. Under Bloom, business partner Alex Muzio, sporting director Chris O’Loughlin, and of course Mazzu the club have united as one almighty collective. When winger Dante Vanzeir earned his first call-up to Roberto Martinez's Belgium in November the club celebrated as a whole.

There are a few English players in the club’s ranks too, including former Portsmouth centre-back Christian Burgess, Matthew Sorinola (from MK Dons) and Marcel Lewis (from Chelsea). “In terms of a footballing philosophy, they (the coaches) want to build up from the back and play entertaining football with a high press,” Burgees explained to Goal. “An attacking team that’s going to score goals, and well-organised at the same time.”

"We are not looking for angels,” the club’s sporting director Chris O'Loughlin told Sky Sports in December. “We want different personalities, the loud one, the quiet one, the joker. It is important to have a dynamic. You can have different goals but there has to be something that binds everyone together. We believe our value system helps that.”

Mentality, communication, courage, and respect are key cogs in Mazzu’s managerial cauldron. "He is a special kind of coach," said O'Loughlin. "He knows how to motivate a group. He knows how to push a winning mentality. He has got this idea into the players that they must win every training session. Most importantly, he has embraced the club's values."

Last week Mazzu was named Belgium’s Manager of the Year (Raymond Goethals Trophy) for the second time in his career, ahead of the winner of the last three Belgian titles, Philippe Clement (now at Monaco), and K.V. Oostende boss Alexander Blessin. Thriving as a leader, he also has some impeccable dance moves. Alan Pardew eat your heart out..

Mazzu is refusing to be drawn into the increasing hype surrounding his team. “The only goal at the moment is to achieve stability and stay in Division 1,” he told The Brussels Times last month. “We have to stay in Division 1 and, once we do that, when mathematically we have enough points, we’ll see if we can set a new target. But we mustn’t talk about titles or European qualification.”

Given the format of Belgium’s top-flight, finishing top of the table doesn’t win you the title. Instead the top-four teams must then face-off in a Championship play-off - each team faces each other twice - with the victor awarded the gong. If Mazzu and Union SG do go all the way and lift the trophy it will be one of the greatest European stories of the 21st century.