Euro 2021 Squad Betting: Jude Bellingham odds-on to make the cut, but does he offer more than Ward-Prowse?

Jude Bellingham has been slashed into odds-on to make England’s final 23-man squad for Euro 2021.

The Borussia Dortmund midfielder was called up to the Three Lions squad for the recent World Cup qualifiers against San Marino, Albania and Poland, and is now facing the prospect of becoming the youngest player to appear for England at a major tournament since a 17-year-old Wayne Rooney did so at Euro 2004.

Aged just 17, Bellingham has shown a maturity far beyond his years this season and is clearly a player with a huge future ahead of him for both club and country. His performance for Dortmund during Tuesday night’s Champions League quarter-final at the Etihad - where he had a perfectly good goal wrongly chalked off in the first half - was exemplary, and provided more evidence to support his case for inclusion into the national team’s squad this summer.

Many believe that this year's European Championships may be a tournament too soon for the former Birmingham City midfielder, though, especially with a number of top-quality options available to England in his position. 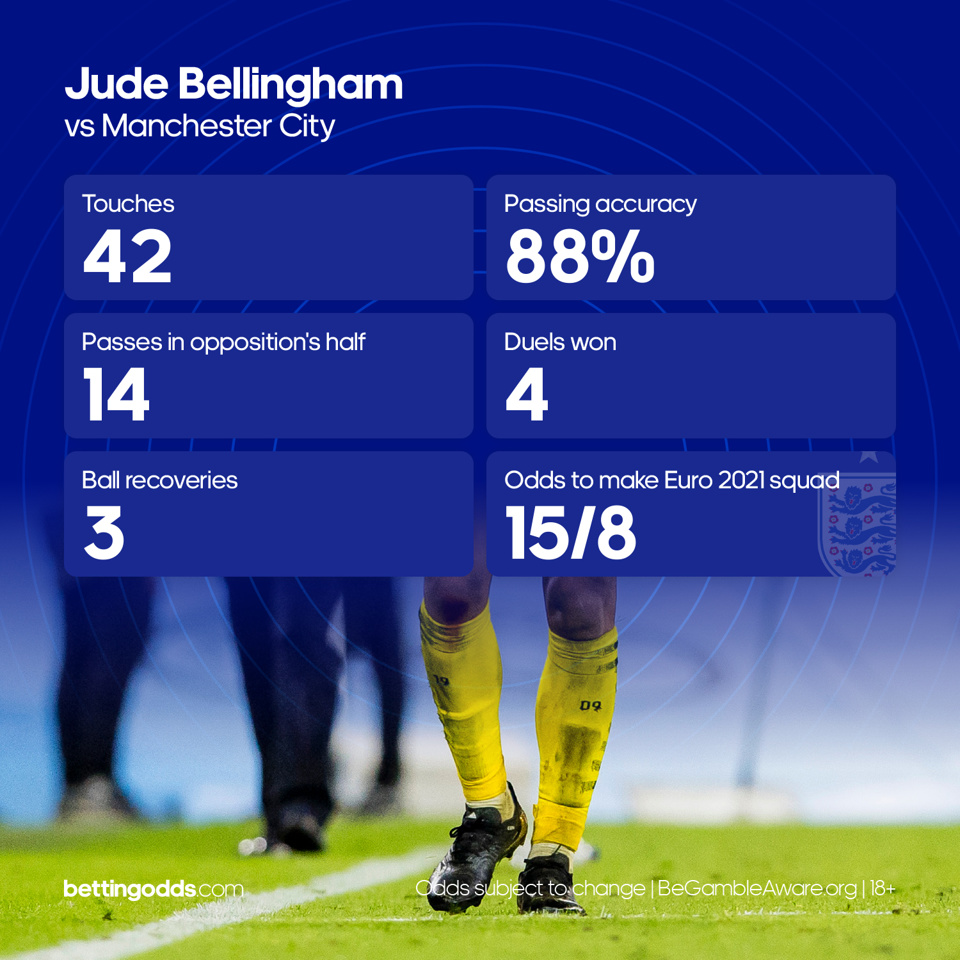 However, with Jordan Henderson’s (4/9) ongoing fitness concerns and the true extent of Declan Rice’s (1/16) knee injury not yet known, there could be a position available for Bellingham (8/15) in Gareth Southgate’s final 23 if one - or both - of those players miss out.

If both of the aforementioned names do return to fitness in time and are available for the forthcoming Championships, then the battle will come down to Bellingham, Kalvin Phllips (4/7) and James Ward-Prowse (7/5) for that elusive final midfielder's position.

Indeed, it is clear that Phillips is highly rated by Southgate - proven by the fact he played all but 20 minutes of England’s three recent WC qualifiers - and therefore likely that the Leeds United midfielder will be a part of the squad should he remain fit from now until the end of the season.

The 25-year-old is also a defensive holding midfielder as opposed to a box-to-box player - like Bellingham and Ward-Prowse - something England would be hugely lacking without Henderson or Rice, making him somewhat of a shoo-in for selection.

Ward-Prowse or Bellingham - who would you take?

If we are to fine-tune this hypothetical situation and say that Henderson, Rice and Phillips are all in the squad, then the battle is realistically between Bellingham and Ward-Prowse for the final slot in midfield.

Both players have enjoyed strong season’s for their respective club sides this term. Ward-Prowse has played more minutes than any Southampton player in 2020/21 (2,913), providing eight goals and five assists for the south coast club in all competitions, highlighting just how important he is to the team in which he captains.

The 26-year-old was a standout performer for England in the 5-0 win over San Marino, scoring the Three Lions' opener with a late run into the box and cute finish into the far corner. Ward-Prowse is a tenacious midfielder who works his socks off with and without possession, but his main selling point is his ability from dead ball situations.

He has scored 10 free-kicks in the top-flight since making his league debut for Southampton eleven years ago - four of which have come this season. The importance of having such a talented free-kick taker should not be underestimated at a major international tournament. Eric Dier and Kieran Trippier have both provided memorable moments from this kind of situation in recent years but not since the days of David Beckham have England had such a reliable threat from set-pieces. 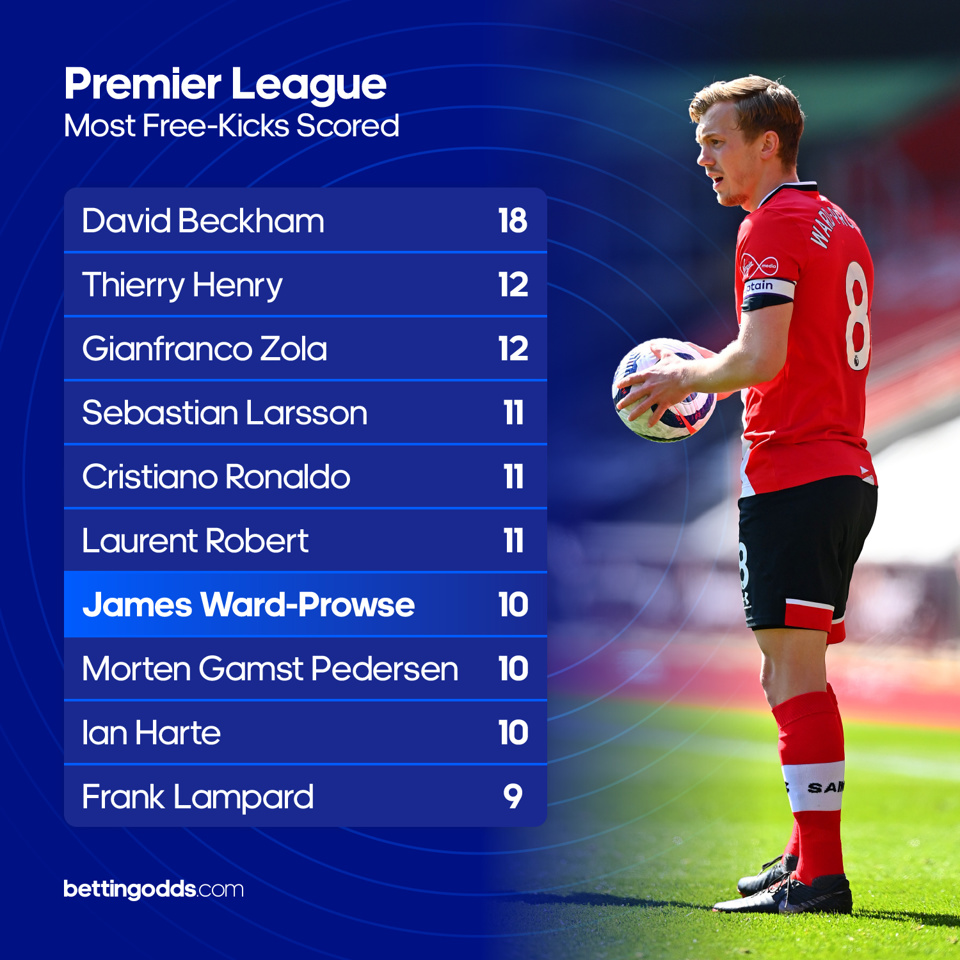 While Ward-Prowse offers more than just his ability from set plays, it is undoubtedly his key attribute. But is that enough to overlook Bellingham for? The 17-year-old is, obviously, a lot more inexperienced compared to JWP, although you would never know that by watching him stroll around the biggest stages of world football on a weekly basis.

The ex-Birmingham star, who was so adored by his former club they retired his shirt number following his departure last summer after just 44 appearances - something which was subject to widespread ridicule at the time but is now slowly beginning to make a little sense - is also playing for a Borussia Dortmund side competing in the Champions League this season; Ward-Prowse is not.

Tuesday night’s Champions League quarter-final between City and Dortmund was built up as a trial run for Erling Haaland to showcase his inhuman talent to the club where many believe his long-term future will lie, and while the Norwegian yet again performed well, it was Bellingham who quietly stole the show at the Etihad, retaining possession, distributing play neatly, even scoring a goal before it was unjustly robbed from him.

It is this level of composure which sways the argument towards Bellingham in this hypothetical 1v1 situation between himself and Ward-Prowse. The Southampton man is confident and calm on the ball, but he has always played for a mid-table Premier League team who have often punched above their weight; Bellingham, nine years his junior, is already doing it at the highest level possible with an unerring swagger.

One thing is for certain, and that is whichever player Southgate chooses to pack out the midfield this summer will only strengthen this ultra-talented crop of players. The options available are all exciting in their own right.

At this moment in time it is all circumstantial - if Henderson and Rice are both declared fit and proper then there is probably just one remaining space available in midfield, and while it seems as though Phillips is a guarantee, nothing in football can be deemed a sure-thing until it actually happens so at this point the challenge is still between three hugely talented footballers.

If Henderson and Rice both fail to recover from their respective injuries in time (unlikely but again plausible), then Phillips, Ward-Prowse and Bellingham will all be selected for the Euros - alongside nailed-on picks Mason Mount, Jack Grealish and Phil Foden. But if there is only one slot available in Southgate’s final-23 (permitting he does take Phillips), I am just about leaning towards Ward-Prowse ahead of Bellingham.

While the latter is an immense talent and one of the many players who are providing hope for the future of English football, alongside his Dortmund team-mate Jadon Sancho, Phil Foden and Mason Greenwood et al, I think that Ward-Prowse’s delivery and the threat he poses from dead ball situations just gives him too much of an edge to ignore.

Forget the experience factor because Bellingham has proven that if you’re good enough then you’re old enough; England need a modern-day Beckham at Euro 2021, a Plan B to rely on if (and indeed when) all else fails. In Ward-Prowse, they have just that.

Who would you take in midfield? Let us know your thoughts by Tweeting us @BettingOddsUK!