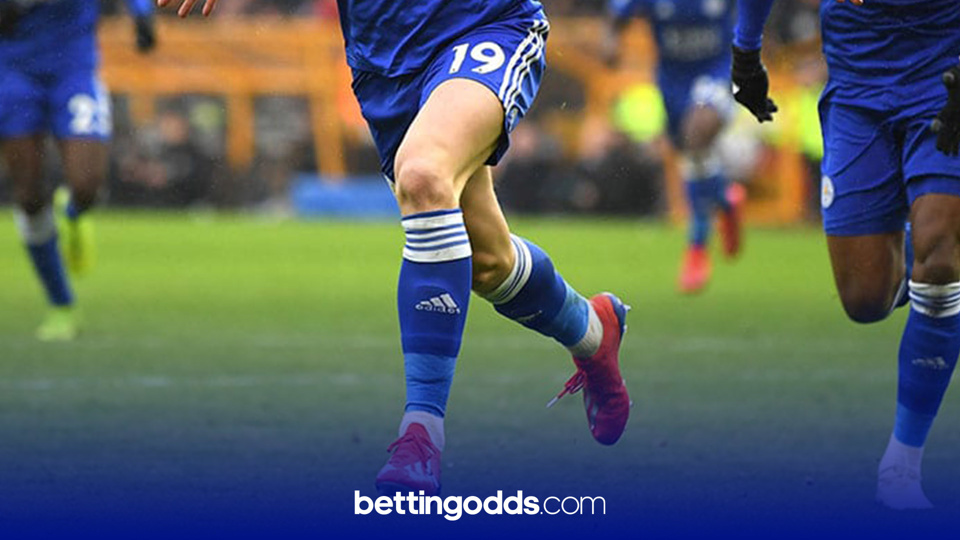 With this summer’s European Championships soon approaching, there is plenty of talk around which players will be called up to the Three Lions squad for June’s tournament.

One name that is capturing the headlines of late is Leicester City winger Harvey Barnes. The 23-year-old has been terrific for the Foxes this season and will rightfully be hopeful of adding to his solitary England cap in the summer.

Barnes made his senior international bow back in October, introduced as a late substitute in the 3-0 win over Wales at Wembley having previously represented his country at Under-18, 20 and 21 level, and there is a collective feeling among viewers of the Premier League that he will indeed become a regular for England in the coming years.

Last season Barnes really burst onto the scene, providing seven goals and nine assists for the East Midlanders in all competitions - a return which saw him mooted as a potential pick for Southgate had the Euros gone ahead as planned last year.

There were, however, question marks over his ability in front of goal. Barnes’ strong points are his pace and directness with the ball at his feet and he frequently finds himself presented with goalscoring opportunities because of it, though often last season these chances went begging due to a lack of composure at the final hurdle.

In the end, the 23-year-old finished last season with six goals to show for his 36 top-flight appearances, and while this was a positive return from a player who had spent half the season on loan in the Championship with West Brom the year previously, it left him with plenty of room for improvement when all was said and done.

This time out, the improvement has been incontrovertible. After just 24 games, Barnes has already bettered his league-tally from last season by three goals, notching his ninth of the campaign during the 2-1 win over Aston Villa on Sunday - a game where he also provided his fourth PL assist when he set up James Maddison for Leicester’s first half opener.

Barnes’ nine-goal haul sees him top the pile - alongside Raheem Sterling and Marcus Rashford - for goals scored by English midfielders/wingers this season while his 25 shots on target ranks him first in the division in that category, five ahead of the two aforementioned names and seven ahead of his Leicester and England teammate James Maddison (18).

It is clear that Barnes has taken on board some of the constructive criticism aimed at him last season, worked on them tirelessly throughout the last nine months and is now reaping the rewards. He is a player full of confidence at the moment, shining for a fantastic team who play to his strengths; mentored by a manager known for getting the best out of his players. 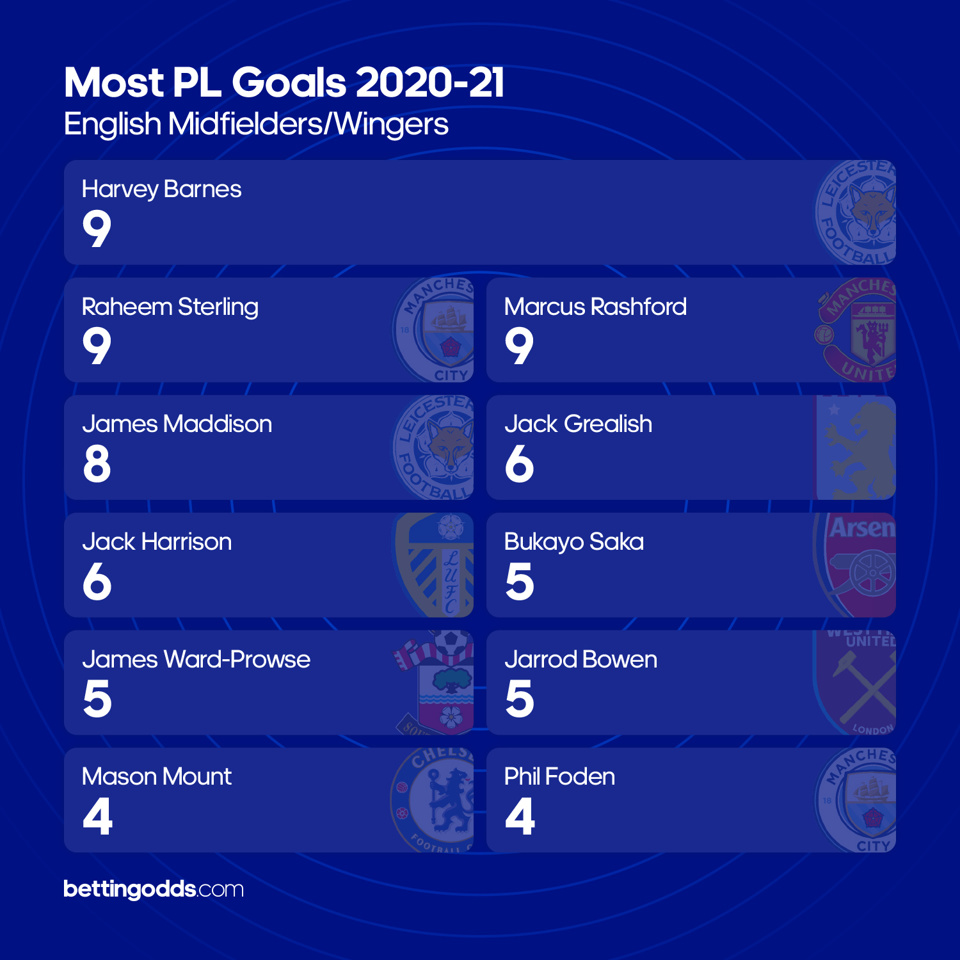 Just last month Barnes was priced at 8/1 for Euro 2021 selection but that has now been cut to as short as 3/1 by several betting firms. This, though, is still a price which could represent some good value given his current form.

The biggest thing Barnes is faced with is the amount of quality he is up against in the wide areas for the Three Lions. Raheem Sterling, Marcus Rashford and Jadon Sancho are three of England’s biggest creative influences and each will definitely be present at Euro 2021 barring any injuries.

This leaves little wriggle room for the 23-year-old but it does not rule him out completely, with there likely to be a spot available for one last wide midfielder/winger in the final 23; a spot which will most probably be contested between the likes of Barnes, Bukayo Saka, Mason Greenwood and potentially even Callum Hudson-Odoi, depending on how the Chelsea wide man fares from now until the season’s end.

Indeed, when you consider Barnes’ versatility and the fact England could play him as a more traditional wide midfielder in a midfield-four, or as a more advanced winger in a 3-4-3 - a formation often favoured by Gareth Southgate - there is certainly a case to be built supporting his involvement over others this summer.

This season Barnes has played in four different positions for Leicester, scoring at least twice when he has been deployed as a central attacking-midfielder (2 goals), a left-winger in a three-man attack (2 goals) and, most commonly, as a left-midfielder in a four-man midfield (9 goals). The only position he failed to score in was when he lined up as a central striker in the 1-0 win over Arsenal back in October.

Breakdown of goals by position - all competitions

As previously mentioned, the fact that Barnes has registered 25 shots on target further shows just how positive he has been with his play this season. While he may have only converted 36% of those shots into goals, it proves that the 23-year-old is capitalising on the right opportunities and getting into the correct positions to score goals which is invaluable as an attacking player. 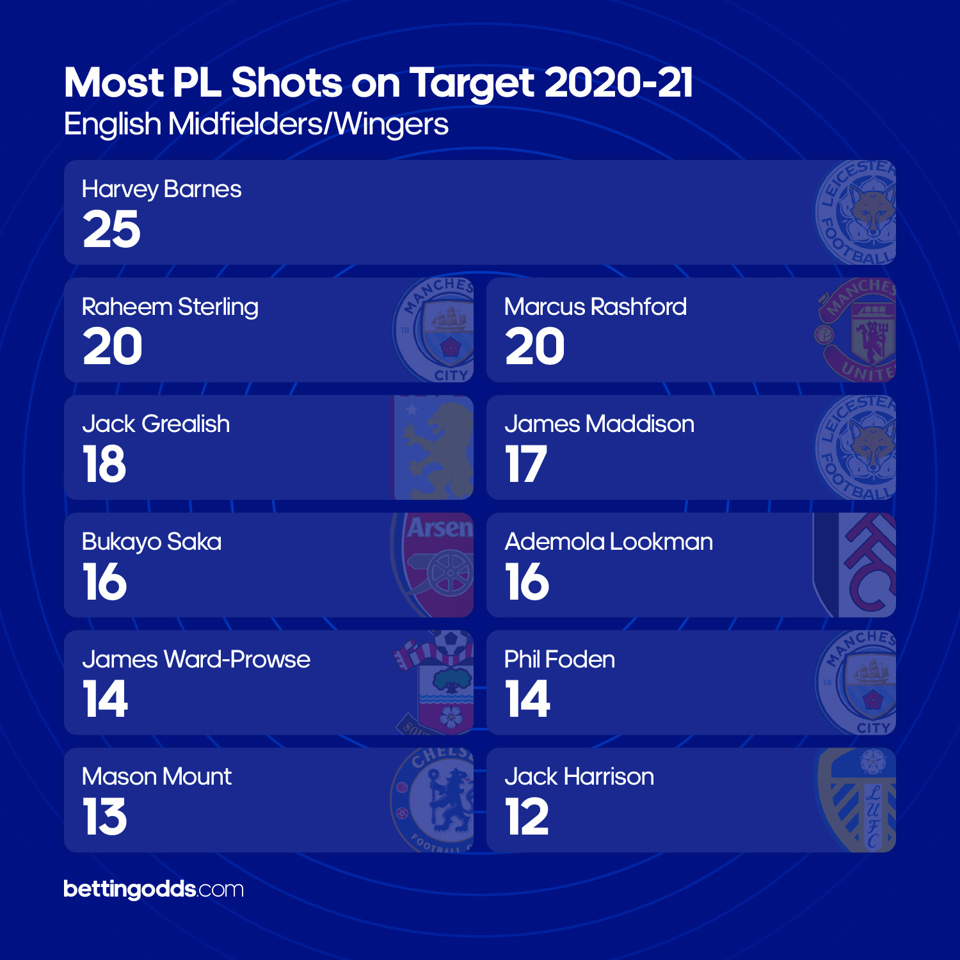 Barnes’ xG (expected goals) rating of 6.43 ranks him fourth overall in the Premier League’s list of midfielders this term, behind only Bruno Fernandes, Kevin De Bruyne and Ilkay Gundogan, and ahead of each of his English peers; yet another factor which suggests he should indeed get the nod this summer.

*to have played 15+ games this season

With all things considered, the outcome for me is resounding. Based on current form and his displays at club level this season, Barnes should definitely be a part of Gareth Southgate’s final 23-man squad for the Euros in some capacity.

His versatility, creative influence and directness are three things that can massively benefit the national side this summer, and overlooking him could well prove to be a costly mistake.