Burnley v Manchester United Tips: Reds Devils set to return to the top of the table 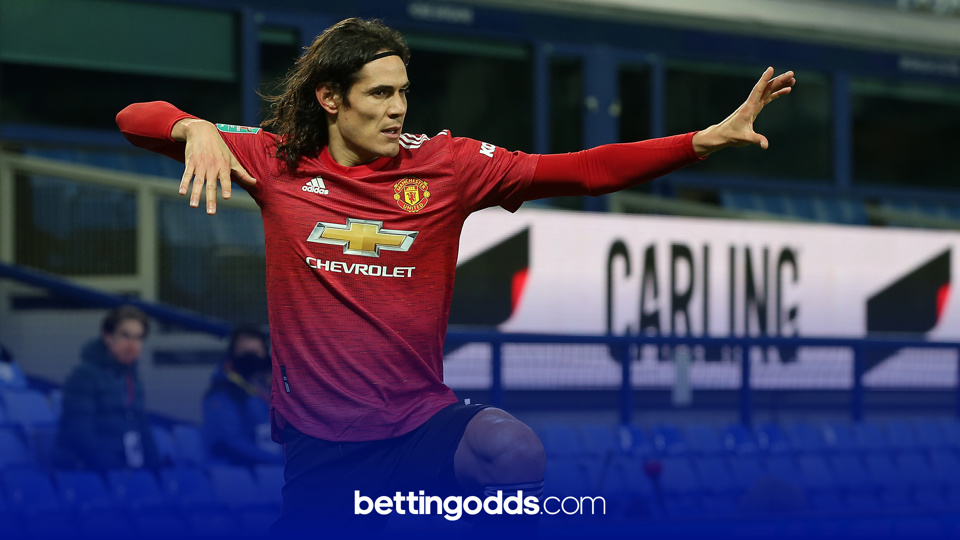 Edinson Cavani has registered 1.49 shots on target per 90 minutes in the league this season and features in our 45/1 selection for the game
By Anthony Eadson
12:39 Tuesday 12th January 2021 - 5 minute read

Manchester United have the chance to go top of the Premier League table on Tuesday evening as they take on Burnley at Turf Moor. United have not topped the table since after the fourth game of the 2017/2018 season when Jose Mourinho was in charge, and we’ve got three football tips for the game which can be seen live on Sky Sports main event at the rather annoying time of 8:15pm.

Edinson Cavani is now available for selection after serving his three match ban. Ole Gunnar Solskjaer stated that Eric Bailly, Victor Lindlelof, Luke Shaw and Paul Pogba all had knocks, after the game with Watford. Alex Telles may well keep his place at left-back with Luke Shaw rested for Sunday’s game with Liverpool.

Chris Wood and Ashley Barnes should start up top for Burnley as the Clarets seek their first win over United at Turf Moor since 2009 when Robbie Blake fired beyond Ben Foster to give Burnley all three points. Dwight McNeil, Charlie Taylor and Jay Rodriguez are all a doubt for the home side.

Having a look at the prices from the bookmakers for the game and Burnley are 13/2 to collect all three points with the draw available at 7/2. An away win for Manchester United is priced at 2/5 an implied probability of 71%.

Burnley v Manchester United
Manchester United to win & both teams to score
11/5
BTTS has landed in all seven of United's away league games this season United have won six of their seven games on the road Burnley have been better over recent weeks and can get on the scoresheet after taking 10 points from their last four home matches
Odds correct as of 2021-01-12 11:50 Odds subject to change.

As mentioned above, it will be the first time since 2017 that Manchester United will have been top of the Premier League should they earn at least a point against Burnley. I’m fancying United for the win but do think both teams will score in the game. Ole Gunnar Solskjaer’s side have played seven games on the road this season in the league and BTTS has landed in every one.

Six of those seven away games have resulted in victories for United and I’m hoping this trend continues at Turf Moor on Tuesday. Burnley have been much better of late and have actually taken 10 points from their last four home games. The Dingles can get on the scoresheet but United’s class should shine through. I’ve taken the 11/5 on offer with the Betfair Sportsbook for Manchester United to win and both teams to score.

Scott McTominay 1+ shot on target
5/2
5 shots on target in his last 9 starts for United 4 goals this season and has openly said how he should be scoring more headers Aerial strength needed against Burnley
Odds correct as of 2021-01-12 11:55 Odds subject to change.

Scott McTominay is a player who I’ve been really impressed with over recent weeks. Having signed for the Red Devils at the age of five, McTominay was handed the armband to captain his side for the first time against Watford on Saturday. The Scot managed to score the only goal of the game in the 1-0 win over the Hornets and after the game when Interviewed, he admitted how he should be scoring more headers at the height of 6ft 3.

That’s four goals in all competitions this season for the 24-year-old and I’m backing him to have a shot on target against Burnley at the price of 5/2, available with both Betfair and Paddy Power. In McTominay’s last nine starts for United he has registered five shots on target. A player who has proved he can shoot from distance with his goal against Leeds earlier this season, and one that I believe is growing in confidence when it comes to letting off attempts at goal. I see Manchester United having plenty of corners and set-pieces this evening and McTominay’s aerial ability could be a factor in helping this selection land.

Today's Tips
Cavani 2+ shots on target, Barnes 1+ shot on target, Telles to be carded
45/1
Cavani has only played 302 minutes of Premier League football. but has registered 1.49 shots on target per 90 minutes  Ashley Barnes looks well priced at 10/11 as a single. The forward has registered at least one shot on target in his last four games Alex Telles was booked seven times in 31 games in his final season for Porto and picked up his first United on Saturday against Watford.
Odds correct as of 2021-01-12 11:55 Odds subject to change.

I’ve also picked out something at a bit of a price for the game. At 45/1 with Paddy Power, I’ve opted for Edinson Cavani to have two shots on target, Ashley Barnes to have one shot on target, and Alex Telles to be carded.

Edinson Cavani should start the game as the main striker for Manchester United with the Uruguayan returning after his three match ban. Cavani has only played 302 minutes of Premier League football this season but has registered 1.49 shots on target per 90 minutes. When starting against Everton in the EFL Cup in December, Cavani landed four shots on target and I’m fancying him to rack up at least two against Burnley on Tuesday.

Ashley Barnes looks well priced to have one shot on target for Burnley at 10/11 with Paddy Power. The robust frontman has registered at least one shot on target in four consecutive games with six in total in that period. Burnley have taken 10 points from their last four home games and this gives belief that they can create attacks which can hopefully result in a Barnes shot on target.

Rounding off this 45/1 play is Manchester United’s Alex Telles to be carded. In his final season for Porto, the attacking-minded left-back was booked seven times in 31 league games. He was booked for the first time for United against Watford on Saturday and at 11/2 he looks a fair price for a repeat. A trip to Burnley can be an eye opening, unpleasant experience for any man, and with Telles tasting Turf Moor for the first time I’m fancying him to pick up a card this evening.

That’s 11/5, 23/10 and 45/1 plays for Burnley v Manchester United. Please always gamble responsibly and best of luck to anyone following the selections.