Who is Markus Schopp? An in-depth look at the potential next Barnsley manager

Markus Schopp has emerged as the red-hot favourite to become the next head coach of Barnsley.

EFL pundit Gab Sutton has taken a closer look at the Austrian, who could be set to replace Valerien Ismaël at Oakwell…

After Ismaël went from Barnsley to West Brom, many assumed the Frenchman’s exit was automatically bad for the Reds and great for the Baggies, but that is not necessarily the case.

Yes, Ismaël led Tarn to their highest finish since 2000 on one of the division’s lowest budgets and true, the 45-year-old will have more spending power at the Hawthorns as well as a more established squad.

In South Yorkshire, however, the foundations were already laid: Daniel Stendel won Barnsley promotion in 2018-19 with a high-pressing style of play with quick transitions, then Gerhard Struber kept them in the Championship the following season with that same approach.

That is not to say Ismaël did not work wonders to achieve what he did, taking the work of his predecessors to a more extreme level with incredible results.

Rather, that he inherited a squad that had been assembled over five transfer windows with, in mind, a clear identity that matched his own.

Barnsley reached the Play-Offs with a group of players possessing the energy, hunger, pace, physicality and youthful exuberance to execute a high-octane style, swarming over opponents like angry bees.

Their work off the ball was more exciting than their work on it, which comprised of direct play into a big striker, namely Daryl Dike in the second half of the campaign.

Ismaël now has the task of quickly revolving an aging West Brom squad to tailor his needs, whereas the new Reds boss is in a better position to find a coherent structure from the outset.

That new boss could well be Markus Schopp, but what do we need to know about him and is he the best man to continue Barnsley’s progress?

Schopp has been described by ‘The Other Bundesliga’ podcast as “Ismael-lite”, which suggests that while the pressing game his predecessor deployed will not be packed in entirely, it may not be replicated at quite the same intensity.

One explanation for this assumption could be that Hartberg’s current squad does not possess a senior defender under the age of 28 – in fact, the four defenders with the lowest shirt numbers are all in their 30s.

At Barnsley, meanwhile, Michael Sollbauer at 31 is by far the most experienced centre-back, in contrast with Michał Helik, 25 and Mads Andersen, 23 – Toby Sibbick and Aapo Halme plus Ben and Jordan Williams are youthful deputies, too.

This suggests that Schopp could theoretically have a similar philosophy to the outgoing Barnsley boss, but not feel able to execute that approach due to the lack of pace of the personnel – but then again, why did he not recruit younger, more mobile defenders? A difficult question, in truth, to reliably answer.

The Styrian club might have been in the Austrian Bundesliga when he took over, but they had recently achieved successive promotions to the top flight.

It is unsurprising, therefore, that Stadion Hartberg possessed the lowest capacity ground of all 12 top flight clubs which, without a mega-rich benefactor, is some indication of budget, as an unnamed user from the Austrian Soccer Board alluded to:

“He has been at Hartberg for 3 seasons (since playing in the Bundesliga) and actually performs above expectations every year, purely in terms of budget. You would expect to be relegated every year, but he even made it to the Europa League Qualification.

“Regarding the style of play, I would say that for the budget and the infrastructural background, he plays very attractively, sometimes with high pressing, fast switching of play and generally looking for salvation on the offensive. This, of course, means that we often scored goals but also often conceded.”

That description suggests, at Barnsley, Schopp will look to maintain the high line that has been implemented by the previous three managers with quick transitions also expected to remain a key theme.

Building from the back

Alpi, from the same forum, has hit on an area in which Schopp differs from his predecessor:

“I would say he likes to establish the game {in possession} from the defence, with no long passes throughout the whole field. Once we got the ball secured in the middle, often we try to be very fast with our attacks. He clearly surprised everyone in the Bundesliga several seasons with Hartberg, considering {we had} the lowest budget compared to the other teams.”

Barnsley’s standard approach cannot work in every match, with some teams stopping them from playing their natural game by staying compact and rarely dwelling on the ball.

Daniel Stendel and Gerhard Struber’s response to this tended to be to accept longer spells of possession, which rarely bore fruit, whereas Ismaël opted to hit Daryl Dike or other front-men with early balls.

In fact, one of the few criticisms the Frenchman faced was that Barnsley had shown the potential - in tenacious midfielder Alex Mowatt, inverted left wing-back Callum Styles, talented defender Mads Andersen and technical forward Cauley Woodrow - to perhaps keep the ball on the deck more than they did and play better quality, passing football.

In March, we saw Sheffield Wednesday and others enjoy reasonable success at Oakwell through sitting deep and denying pressing opportunities by looking for the early, direct balls for quick runners in behind the high line.

That may become a more prominent theme next season, so the Reds need to retain their core identity whilst gaining the tools to open opponents up in different ways – Schopp might just help them do that. 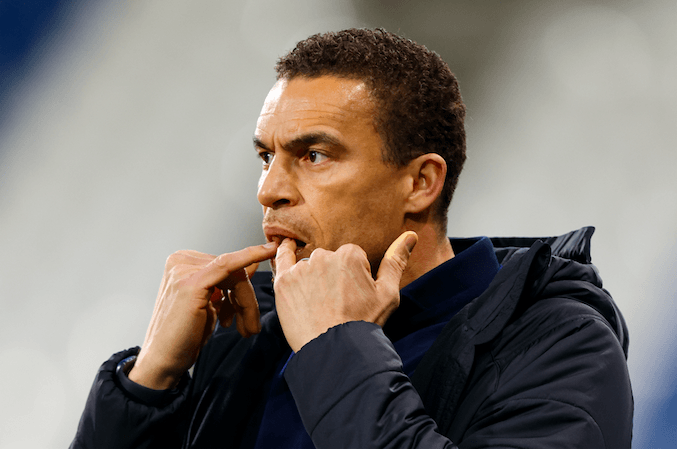 Alpi, though, may have hit on a new development in Schopp’s style, in contrast with the below observation from Felix Pichler on Total Football Analysis:

That article, written in February 2020, describes an approach that provides an incredibly - and perhaps even concerningly - stark contrast from the core values at Barnsley.

Felix’s words imply that the high-pressing, “no long passes” style referred to on the forum has only come to fruition in the last 12 months, which suggests that Schopp is not fundamentally attached to one specific strategy.

That is not a bad thing per se, but what made Barnsley so impressive last season – and, to an extent, the two before that - was the consistency of their methods; every player knew exactly what to do in every game, because it was drilled into them religiously by Ismael and his coaching staff.

The question is whether a manager who deployed a deep defensive line and a low-to-mid pressing block as recently as 2019-20 will have that same conviction.

The Championship is a demanding division which means, when on a bad run and pressure mounts, there can be a temptation to temporarily embrace a more conservative approach, which can then lead a team away from it’s core identity.

@GabSutton Hi. I really can't say it. He tried many things in Hartberg. Schopp likes to vary the lineups. Because of that I can imagine that he continue with the 3-4-3, but it wouldn't be a bis surprise if he tries something new.

The unpredictability of Schopp extends beyond playing style to formation.

Barnsley deployed a 3-4-3 – or 3-4-2-1/3-4-1-2 - in every league game last season, with Mads Andersen, Michal Helik and Michael Sollbauer the favoured defensive trio, which creates some uncertainty.

Schopp deployed a 4-1-4-1 or 4-2-3-1 in every game for Hartberg in the 2019-20 campaign, but has more recently dabbled with wing-back systems and might not be averse to maintaining the 3-4-3, which suggests he is likely to make frequent alterations to formation and personnel.

Experimenting with the back-four would mean Tarn forgoing either Helik’s aerial prowess, Sollbauer’s organisational qualities or Andersen’s ball-playing ability, which would be a disadvantage.

This shift would also, though, negate the hindrance of not having a left-footed centre-back, because the onus would be partly on the orthodox left-back progressing play up the flank from deep.

On top of that, while Callum Styles has been among Barnsley top performers as a wing-back, he is so technically gifted, such a driving, creative force, that he could influence games to an even greater extent in a central midfield role.

An inward move for Styles would also allow Schopp to simultaneously incorporate his brilliance and that of left-back Clarke Oduor, who is an extremely intelligent operator and highly unlikely not to start more frequently at Oakwell than he has.

Additionally, any switches to four at the back would give Barnsley’s defenders and goalkeeper more appealing options ahead of the ball that don’t involve playing long to a physical striker making them potentially a better-rounded outfit.

In the absence of a star individual up top like Dike, that could be a sizable plus.

AC Wolfsberger were third in the Austrian Bundesliga by the time Gerhard Struber took the Barnsley job, having drawn with Justin Kluivert and co. at Roma in the Europa League.

As LASK boss, Ismael oversaw victory over Basel in Champions League qualifying and a narrow defeat to Club Brugge (who went on to play Real Madrid and PSG), before reaching the last-16 of the Europa League.

Schopp, by contrast, comes with a more modest background, which on the one hand, shows he is capable of working wonders on a small budget – which any Barnsley boss has to do in the second-tier – but also shows he has not yet proven himself on a big stage.

He is, though, very passionate in his celebrations of goals and victories – reminiscent, perhaps, of Struber’s wild rejoicing of Patrick Schmidt’s injury-time winner against Forest and his emotion at the final whistle against Barnsley.

Schopp’s desire to succeed for the club should, at least, strike a chord: as for the rest, well… who knows?