The curtains have been drawn on a compelling fortnight at Wimbledon during which Novak Djokovic came-from-behind to defeat the always-entertaining Nick Kyrgios and claim his seventh crown at SW19, while the Venus Rosewater Dish now has a new owner in Elena Rybakina following the Kazakhstani’s three-set comeback over the popular Ons Jabeur.

Players will now begin the hard-court season, building-up nicely towards the fourth and final Grand Slam of the year, the US Open, which will take place in New York between 29th August and 5th September.

Below we take a look at what the early odds are saying in both the men’s and women’s betting markets, which at this stage both feature some appealing prices...

Bookmakers are taking absolutely no chances right now on Novak Djokovic, who currently tops the betting for US Open glory for the fourth time in his career despite there being next to no chance that he’ll take to the court in August.

The 21-time Grand Slam winner - now just one off record-holder Rafa Nadal - is forbidden from playing at Flushing Meadows due to the coronavirus vaccination rules. Djok isn’t vaccinated and doesn’t plan to be either, so unless his stance changes then the Serb won’t be playing in New York. He’s also barred from the Australian Open for the same reason meaning we remarkably may not see him in Slam action again until the French Open in May 2023!

With this in mind, it could be a decent chance to look at a few other names in the market, whose odds will no doubt shorten once Djokovic’s absence is official (he could still be handed an unlikely exemption).

Nadal definitely sticks out at a best-priced 13/2 with William Hill. The Spaniard was on a roll at Wimbledon where he was in the running to continue his quest for a remarkable calendar Grand Slam, only for an abdominal injury to force him to withdraw following his epic five-set win over Taylor Fritz in the quarter-finals. Providing he makes a full recovery come August, Nadal will be expected to challenge for his fourth US Open gong. He’s triumphed in his last two US Open appearances but hasn’t featured since 2019.

Sandwiched between Djokovic and Nadal in the betting you’ll find Daniil Medvedev at 5/2. Forced to miss Wimbledon because of the ban on Russian players, the 26-year-old will be bidding to return to Slam action in style. After all, this is a player who won his maiden major at last year's US Open, dropping just one set en-route to glory which was capped after a stunning straight sets win over Djokovic. He’s reached the final in three of his last six major tournaments, while he was a beaten finalist at the US Open in 2019.

Spanish star Carlos Alcaraz reached the last-four of the 2021 US Open - his first appearance - and can be backed at just 4/1 to go the whole way this time around. He's a cracking talent but does look a little short here for my liking.

2020 runner-up Alexander Zverev is hovering around the 16/1 mark alongside Stefanos Tsitsipas, with last year’s semi-finalist Félix Auger-Aliassime at 25/1.

Jannik Sinner looks a decent bet at 25/1 following his memorable run to the Wimbledon semis where he lost in five-sets to champion Djokovic, but it’s Matteo Berrettini who represents a huge price at 33/1. The Italian, who was the second favourite to win Wimbledon only for Covid to rule him out, has reached the QFs or better in each of his last four Slams, and has a QF and SF showing in his last three US Opens. American Taylor Fritz is also one to keep an eye on at 40/1.

Fresh from his memorable run to the Wimbledon final, Nick Kyrgios is available at 50/1 to go one better at the US Open. SW19 semi-finalist Cam Norrie is around the same price, while 2012 US Open champ Andy Murray is out at 70/1.

Iga Swiatek’s superb 37 match winning streak may have come to an end at Wimbledon, but the World No.1 remains the stand-out performer of 2022 and early 5/2 favourite to win the US Open.

The Polish player won six tournaments in a row - including the French Open - before her Wimbledon exit so don't be surprised if she puts together another hot run ahead of the US Open, where she's surprisingly never made it past the fourth round.

Four-time Grand Slam winner Naomi Osaka (7/1) was a notable absence from the All England Championships due to an achilles injury, however the Japanese star will hopefully be fit and firing once again come the US Open, where she’s twice lifted the trophy (2018 and 2020).

2021 semi-finalist Aryna Sabalenka is 12/1 alongside Wimbledon 2022 semi-finalist Simona Halep, who is a tad shorter than the woman who knocked her out at SW19, Elena Rybakina: The first player from Kazakhstan to win a Grand Slam is a 14/1 shot to back-up her Wimbledon triumph with US Open success.

The player Rybakina beat in the final, Ons Jabeur, is 14/1 in the US Open market, whereas 18-year-old American Cori Gauff  is available at 16/1 to win on home soil. 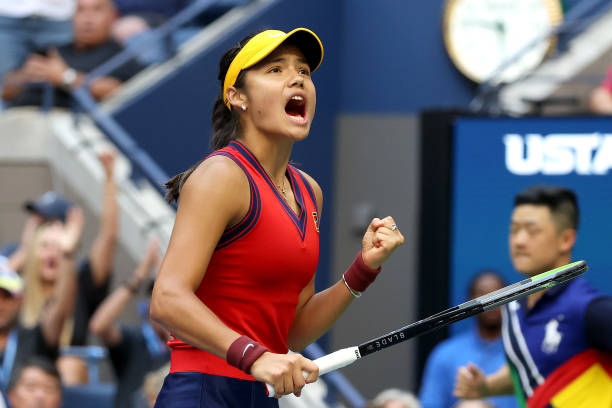 Emma Raducanu, an 18-year-old from Britain, becomes the first qualifier to win a Grand Slam singles title. Takes the US Open with an ace to close out her 6-4 6-3 victory over Leylah Fernandez of Canada. Did not drop a set in 10 matches. One of the great tennis stories
#getty https://t.co/ytgG1Zf8W9

British hopes will be firmly pinned on defending champion Emma Raducanu who is a best-priced 25/1 (Boylesports) to become a multiple major winner. The 19-year-old’s form and fitness has robbed her of any sort of consistency since her stunning US Open win, but you’d be silly to rule her out before a ball is served.

Amanda Anisimova's run through to the Wimbledon quarters will have given her a huge injection of confidence, with the American 20-year-old a nice price at 33/1.

And last, but certainly not least, we can’t not mention Serena Williams. The American returned to action at Wimbledon, losing a thrilling three-setter in the first round, and while there’s been no indication that she’ll play at Flushing Meadows, if she does it could well be her last ever tournament. She’s 25/1 to win the US Open for a seventh time and subsequently equal Margaret Court's all-time record of 24 Slams.

Australian Open 2023 Women's Preview: Iga Swiatek to show why she is number one in the rankings