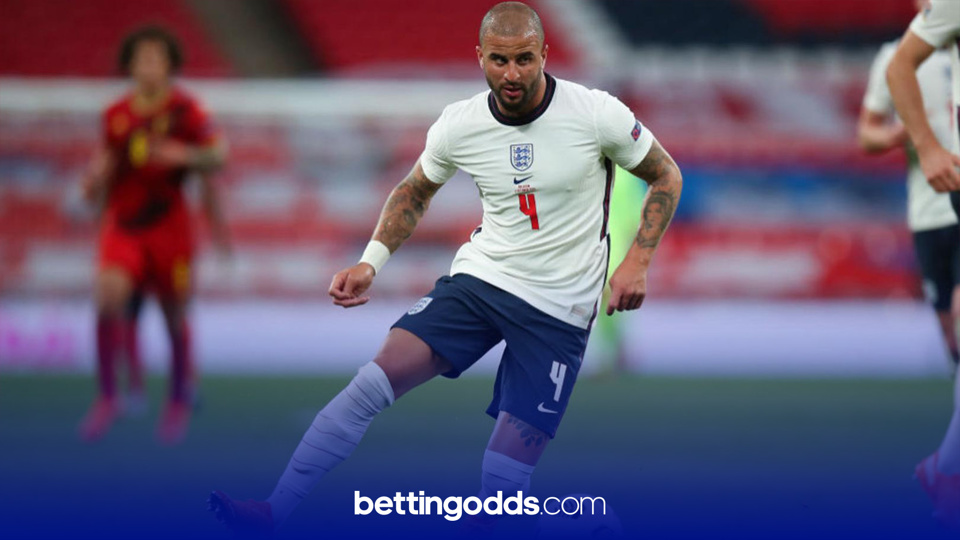 Kyle Walker was the 61st player to reach 50 caps for England on Sunday and we think he looks good value to make the Euro 2021 squad next summer.
By Anthony Eadson
13:09 Monday 12th October 2020 - 5 minute read

England put in a gritty performance against Belgium on Sunday which led to them coming out 2-1 winners against the current best ranked team in the world. England are in fact the 9/2 favourites to win next summer’s delayed European Championships with Belgium and France next in the Euro winner betting  market at 5/1 and 6/1.

It was an interesting starting eleven that Gareth Southgate named for Sunday’s game with starts for all three of Trent Alexander-Arnold, Kieran Trippier and Kyle Walker. There’s plenty of discussion around who should be named in Gareth Southgate’s 23-man-squad for the Euros next summer, but we’ve taken a look at those who are most likely according to the odds from bet365.

The 23 most likely according to the odds...

When running through that list of players it does raise a few eyebrows. The main issue here is that there is a disproportion of players in different positions. The 23 man squad according to the odds from bet365 is made up of three goalkeepers, six natural defenders, seven midfielders and seven forwards.

There’s a varying range of systems and formations that could be put into practice by Southgate but he will almost certainly not be going with that 23 with that is suggested by the odds. To take seven forwards and just six defenders simply doesn’t happen. Here’s the list of players who have been left off the plane.

Which players does that leave?

One of the main takeaways from bet365’s list of the 23 most likely names according to the odds was that they were top heavy with seven forwards and only six natural defenders. Conor Coady is one who I think can slot into that group and at 6/4 he’s a respectable price.

Coady was the first Wolves player to play for England since Steve Bull in 1990 when the 27-year-old made his debut against Denmark in September this year. He was awarded man of the match that evening after his clean sheet and then followed that up with a goal against Wales on his second appearance last week at Wembley.

Wolves’ captain is a real leader on the pitch. He is incredibly vocal and has become a rock at the back for his club. Coady’s no nonsense attitude and desire to work hard has led to praise from many players and pundits. Being able to slot into a three or four man defence also will suit Southgate and at 6/4 he would be worth a play in this market in my opinion.

Kyle Walker started as part of a back three for England against Belgium on Sunday. He’s a versatile player who can play a range of positions across the back line or as a wing-back. One of his greatest strengths is his pace and his ability to get back and sweep up potentially dangerous situations is a huge draw.

Against Belgium Walker became the 61st player to earn 50 or more caps for the Three Lions. He’s a player who Southgate has regularly selected in the past and at 2/1 he looks like a very attractive price to me.

This one may get a few laughs from some people but hear me out. At 50/1 I think Aaron Cresswell is way too big a price to make the 23 man squad next summer. The current crop of 23 that bet365’s odds indicate will be on the plane, only includes one left-back in Ben Chilwell.

Yes there is the possibility that Gareth Southgate may choose to play a natural right-back on the left of the defence just as he did with Kieran Trippier against Belgium. However when looking at the left-backs priced shorter than Cresswell in the betting we have, Luke Shaw 5/1, Danny Rose 10/1, Brandon Williams 12/1 and Ryan Sessegnon 33/1, With Alex Telles arriving at Manchester United, I fear there will be less game-time for both Luke Shaw and Brandon Williams this season with the latter possibly acting as cover for Aaron Wan-Bissaka at right back.

It’s also been a positive start to the season for Cresswell who has already three caps for England under Gareth Southgate. The West Ham defender has two clean sheets and two assists to his name already. His wicked delivery into the box could also be a fator here with England often scoring plenty from set-pieces in tournaments. It would be a huge ask for Cresswell to make the squad, however I’ve seen a lot worse 50/1 shots.